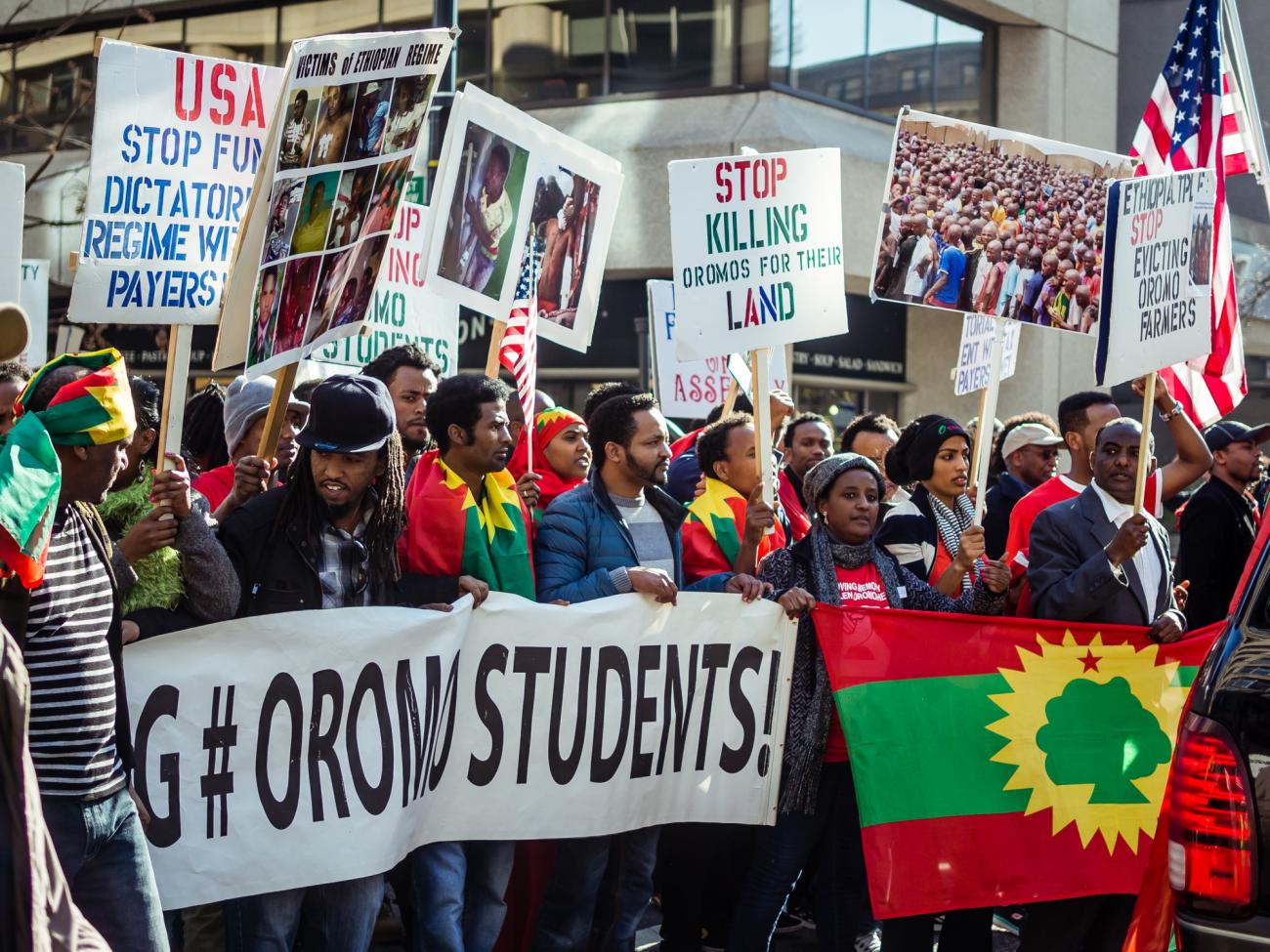 On August 21st, in Brazil, Ethiopian runner Feyisa Lilesa was awarded the silver medal for the Men’s Marathon in the 2016 Rio Olympics. Although this was perhaps one of the greatest sporting achievements of his life, this day will forever be remembered for the political protest he made just before the finish line.  While in the global spotlight,  Lilesa raised his hands above his head in an ‘X’ formation to stand in solidarity with the Oromo people of Ethiopia, who have suffered a crackdown at the hands of the Ethiopian government.

Lilesa is one of the thousands fighting for the rights of the Oromo people. In August 2016, the United Nations High Commissioner for Human Rights, Zeid Raad Al Hussein, called on Ethiopia to allow UN international observers to investigate the excessive use of force by the government’s security forces against peaceful protesters in the Oromo and Amhara regions of the country. There is a strong need for organized international pressure on the Ethiopian government. A credible and independent investigation into this country's Human Rights offences is long overdue. This will be a huge and very welcome step for the people and the country as a whole.

Human rights abuses have been prevalent throughout Ethiopia’s history, but for the last nine months, protests have erupted in Oromiya, the homeland of Ethiopia's largest but historically marginalized ethnic group, the Oromo, of which Feyisa Lilesa belongs. The protests are have now spread north, to a second region, the Amhara.

Although these protesters from Oromo and Amhara have different backgrounds, cultures, and complaints, they share a growing fear and frustration with the rule of a third, minority ethnic group — the Tigrayans. As NPR reported, the Tigrayan elite has a “cartel-like grip on the government, military and the fast-growing economy.”  The Tigrayan Peoples Liberation Front (TPLF) forcefully rose to power after the fall of the Soviet Union. Since then, there have been numerous human rights violations, with examples like the 2001 killing of forty Addis Ababa university students for simply demanding the academic freedom to publish a student newspaper, to the Killing of 200 Oromo in 2014, according to the Solidarity Movement for a New Ethiopia (SMNE).

Related: Learn more about the TPLF in Ethiopia here.

The right of peaceful assembly is protected in Ethiopian and International law. Ethiopia’s Constitution states “everyone shall have the freedom, in association with others, to peaceably assemble without arms, engage in public demonstration and the right to petition.” But, after Human Rights Watch interviewed more than 125 witnesses, victims, and government officials, a significant pattern of human rights violations during peaceful Oromo protests was revealed. Examples from late 2015 when the decision of authorities in Ginchi to clear a forest for an investment project triggered protests in at least 400 different locations across all the 17 zones in Oromia, until May 2016, and even into current times, prove there have been massive human rights violations. Numerous reports exposed that in many locations security forces have gone at night, arresting innocent and unsuspecting members of the community such as students and those accommodating students in their homes. Security forces also strategically target those seen as “influential members of the Oromo community, such as musicians, teachers, opposition members and others thought to have the ability to mobilize the community for further protests.” Even more shocking, is that many of those arrested and detained by the security forces were children of eighteen years and younger. Security forces have also been reported to open fire on, and kill peaceful protesters, as well as torture or beat many of the detained Oromo. Many of the females detained have reportedly been raped by security force personnel, while almost none of the detainees have had access to legal counsel, adequate food, or their family members.

An unnamed student said in an interview with HRW on January of 2016, said his friend “was shot in the stomach [at the protest], his intestines were coming out, he said, ‘Please brother, tie my [wound] with your clothes.’ I was scared, I froze and then tried to do that but I was grabbed and arrested by the federal police. Jamal died. They arrested me and took me to Bedeno police station.”

With ongoing events such as these, the people of Ethiopia have appeared to have reached their limit; the brutal force being used by the regime to deter an uprising is starting to backfire, creating new alliances between previously divided groups of Ethiopians such as the Oromo and the Amhara. The regime, struggling to find ways to retain domination, resorts to solutions like the exploitation of Ethiopian resources, land, and opportunities; but this too, is becoming a regime failure.

A press release from The Solidarity Movement for a New Ethiopia (SMNE) notes, this is a regime, accustomed to using tools like manipulation to divide the people by ethnicity or other differences, furthering ethnic hatred, alienation and isolation, leaving a niche for the regime to squeeze into. It has allowed them to repeatedly commit fatal human rights atrocities against these groups with no fear of a united retaliation; but this is suddenly changing. These methods of turning selected ethnic groups against one another, is being scrutinized by Ethiopians; and previously rival groups are now unifying to challenge it. As SMNE said, “more killing, wounding and use of violence against unarmed civilians on the part of the regime’s security forces are strengthening, not weakening, the movement of the people,” but the movement is just beginning.

Ethiopia’s government has rejected the call for UN intervention and promised to launch its own investigation according to Al Jazeera. With the TPLF now facing a crack in the current power structure of the country,  the government’s resistance to UN intervention was to be expected. The fearful reality is, however, that the TPLF, power hungry, and corrupt, will continue to use illegal force in an attempt to maintain control. But this lack of legal and transparent investigation of human rights violations in Ethiopia strongly implies that the Ethiopian government’s investigation of the ongoing human rights crisis will not be independent, impartial and transparent, and according to Sarah Jackson, Amnesty International’s Deputy Regional Director for East Africa, the Horn and the Great Lakes. “It is time to step up efforts for an international and independent investigation in Ethiopia.”
For years the government has worked to project a “forward thinking, democratic, and economically progressive image” of Ethiopia to outsiders, while on the inside, achieving the total opposite. For example, laws such as the Charities and Societies Proclamation law (CSO) which is meant to appear as an advocacy network, actually has criminalized human rights and other kinds of advocacy work in Ethiopia, making an equal and  civil society impossible to maintain in Ethiopia. This makes the presence of an independent organization like the UN crucial for the protection of the Oromo people, who are practically inhibited from seeking protection themselves.

According to the Press Release from SMNE, “meaningful democratic reforms, restorative justice, and reconciliation for all the people of Ethiopia, including the current ruling party,” are the essential measures which need to be enacted if Ethiopia is to find peace and avoid total disaster. History shows that the government will not cooperate without pressure from key donor nations such as the the United States, the United Kingdom, the European Union, Canada, Norway, Sweden etc., as well as from major international human rights organizations, to provide leverage critical in obtaining substantial changes for the rights of the Oromo people and governmental structure of Ethiopia as a whole.