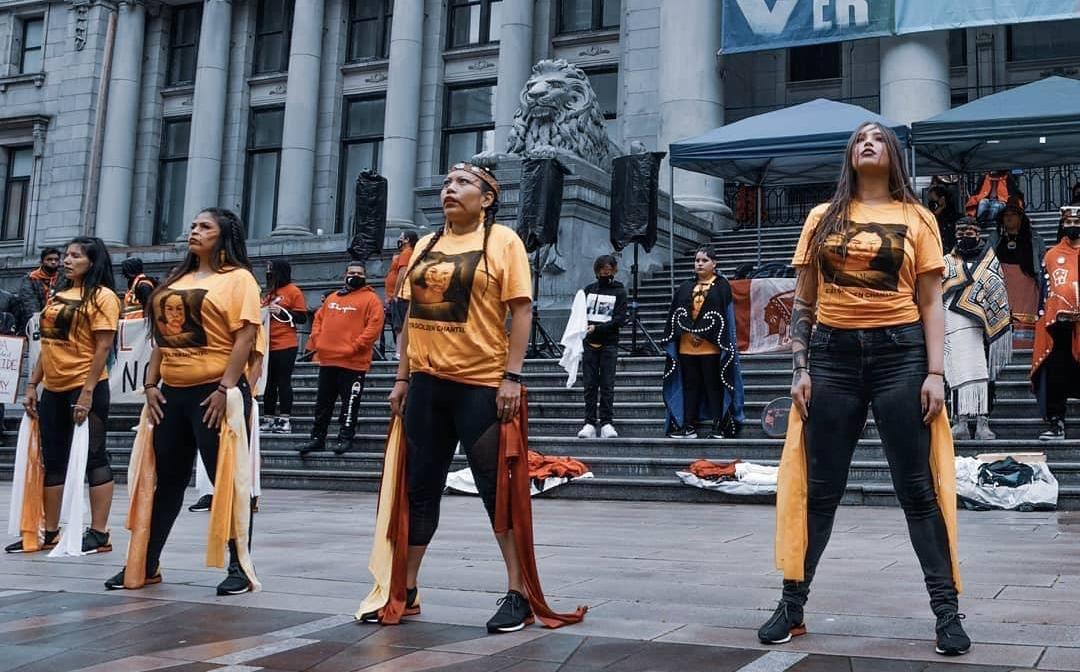 May 5th is the national day for action and justice for Missing and Murdered Indigenous Women and Girls and Two Spirits (MMIWG2S) in Canada and the U.S.. In 2019, the National Inquiry on the Missing and Murdered Indigenous Women and Girls (MIWG) in Canada was released. It is an intensive 1,200-page report highlighting over 230 recommendations and concludes that the murders and disappearances of Indigenous women and girls are genocide. The proclamation led to May 5th being recognized as the National Day of Awareness for Missing and Murdered Indigenous Women, Girls, and Two-Spirits (MMIWG2S), however, this advocacy work has been ongoing for decades. Since the marking of the National Day of Awareness for MMIWG2S in Canada many movements, as well as local, national and international grassroots organizations have called for action and justice around the world as this issue is an international epidemic gaining more media attention each year.

What are the root causes of violence against Indigenous women and girls? To understand how it all came to be in Canada, Lorelei Williams shares with Cultural Survival the root causes of this issue and her experience and tremendous contribution in amplifying the stories of MMIWG. Williams is from the Skatin Nation on her mother’s side and Sts´alies aka Chehalis on her father’s side. She resides on the unceded Coast Salish Territories of the sḵwx̱wú7mesh (Squamish), sel̓íl̓witulh (Tsleil-Waututh), and xʷməθkʷəy̓əm (Musqueam) Peoples of Turtle Island (North America). She wears multiple hats as the founder of Butterflies In Spirit, a dance group that advocates for justice for MMIWG families and builds awareness of the violence against MMIWG based in Vancouver, British Columbia. She also holds years of experience working for nonprofit organizations in the field of social work, providing support, training, and uplifting Indigenous-led initiatives to heal, promote, and protect the lives of Indigenous Peoples. Williams also volunteers for the Missing and Murdered Indigenous Women Collation in Vancouver, which is a diverse group of more than 25 urban community and political advocacy groups and family members of those missing and murdered. She is trained in Indigenous Focusing Oriented Therapy on Complex Trauma, which was started by Shirley Turcotte, and is a body-centered and person-centered approach to healing as well as a safe and effective method of working with clients who experience complex trauma.

Williams shares why she advocates for MMIWG: “I do this work because I have a missing aunt, my cousin was murdered by serial killer Robert Pickton, my other cousin was taken by another serial killer Terry Arnold, and she was raped in the mountains when she was sixteen years old, thankfully she got away and she is still alive today but she lives with survivor´s guilt. My other aunt was pushed out of a window in the downtown Eastside in Vancouver, thankfully she survived as well.”

Butterflies In Spirit provides critical support for family members of MMIWG. It is not just a dance group, rather a movement that has constellated relationships and built a community for MMIWG families to honor the lives of MMIWG through dance, vigorously drawing light to the cases of the missing and murdered to be seen by having their images placed on t-shirts and put up where ever it is feasible to make visible their stories to the public eye. On April 30, 2021, Butterflies In Spirit celebrated its ninth anniversary, and has received national recognition across Canada, and internationally, being invited to perform throughout Turtle Island and Abya Yala.


The dance group aims to produce dance performances both contemporary and traditional, and the outcome has been healing for Indigenous survivors of violence and families impacted by MMIWG. The original idea emerged in response to Williams aunt who went missing in 1978 the negligence of the local police department which chose not to investigate after numerous attempts from family members--it was only acknowledged in 2004 when a missing report was finally filed.

What Williams did not realize was that she was not the only one confronting the frustrations of other forms of negligence in MMIWG cases by the state, and learned that other family members felt similar and joined her performances to represent and honor their missing and murdered loved ones. Williams expresses, “I did not realize how healing dance really is. I have to learn my own traditional dance for my dance group. A number of us in the group did not know our traditional dances but we had to learn it for a certain piece called Sisterz […], so even that because of our cultures were taken away in residential schools I was able to get that back. I want to learn my own traditional dances. Now we are working on a piece MMIWG song where we have to put something in our languages and we have to learn something in our own languages. The dance group is healing together, raising awareness on this issue, supporting each other, it´s just so healing and that is how we break these cycles. We are always there for our families and other families because we know that the police do not take cases seriously, so what Butterflies In Spirit does we put their pictures, we put their faces out there and we keep saying this is a huge issue and we need to pay attention.”

Williams expresses how even with traditional dances being taken from Indigenous Peoples she stands strong, present, and resilient in reclaiming what is rightfully hers. Canada has a chain of colonial acts against the Indigenous Peoples in implementing systemic and genocidal policies that continue to enforce the layers of racism, violence, discrimination, and abuse among Indigenous communities and non-Indigenous communities. The Canadian government’s residential schools took millions of children from their homes without consent or consultation with the forced intention of eliminating their Indigenous identity, cultural practices, traditional knowledge, music,  dance, along with close to an extinguished majority of their Indigenous languages; these genocidal acts continue to echo throughout Turtle Island today.

Williams shares her views of the root causes of violence against Indigenous women and girls in Canada, “I think first of all colonization, genocide, and systemic racism. There is so much racism within the government, the police, media, all of the systems and that is why predators target us because they know that the police do not care if our women go missing and the government doesn't care either and there are so many policies against us. Canada is racist. The racism and the genocide have to stop, we have the governments, the cities, and municipalities all of them saying they are all about reconciliation but that is not true when the issues haven’t stopped. Just being acknowledged, our lands need to be acknowledged because since colonization they tried to get rid of us by taking our children and throwing them in residential schools. They were targeting our Indigenous women and girls to end that life cycle, what better way to kill us is to target Indigenous women and girls, our life-givers.

People across this country do not see or recognize that they are racists, there is so much of that and that has to stop. We´re at the bottom in Canada of everything and we are the life-givers of these lands, this is our land. We need to be seen; we are just shoved under the rug. I have to work a million times harder than a white man just to survive. I am constantly fighting for something every single day, whether is my housing, education system and for Indigenous women just to even be acknowledged as a person. You have white men at the top and Indigenous women at the bottom, even Indigenous men are at the bottom but I feel they are above Indigenous women, not by much but they are. Just even being seen would help.”

Williams comments about how rewarding and challenging it can be to honor MMIWG. “I have my daughter to protect and that is what motives me and pushes me hard. Just wanting justice, wanting to be free. I had to buy pepper spray the other day, I never had to do that. I have taken so many self-defense courses, I shouldn’t have to live this way, no woman or girl should have to live this way. I do a lot of self-care to keep doing this work that I have to do. I know I have to take care of myself in order to be able to help others. Braiding my hair […] protect[s] me as well and my people. I have heard stories of why we would not braid. There have been moments where I have broken down crying, especially the lateral violence but at the end of the day I am not doing this for them but for my family and daughter.”

Indigenous women and girls are being murdered and going missing around the globe, this is a global crisis that needs to be addressed. For Williams, it was important to start in her community, working locally with families of MMIWG. “At the beginning of my journey, people were saying to me that this is an international issue, how come you do not help them. I needed to start with my community first which I have been doing and it naturally expanded on its own. I thought the violence was worse in [Latin America] however, I was told […] that it was just different.”

Williams continues to grow alongside Butterflies In Spirit sharing how “our dances were just supposed to be a one-time thing […] during the Wally Oppal Inquiry and my target was the white lawyers and the cops in that inquiry. That is who I wanted to speak to and wanted them to see that this is a huge issue.[…] Ever since we have been invited to conferences around the world. Our dances changed, the first song used was Beyonce’s song, Run the World (Girls). That was our first performance.” The choreography, songs, and performances have evolved over time and incorporate more Indigenous influence such as their recent performance with music by Sisterz and Neon Natives, emerging Indigenous artists.

“I can't believe I was actually able to hire an assistant. I never thought that I would be in a position to do this. We have so much work to do, it is not just dance. We have expanded and grown so much and I feel like I could grow even more. I never thought we would go to Bogota or Mexico. We have been invited to Japan, Australia, Barbados, but we just never had the funds [...] I am learning more about the MMIWG in Mexico and Bogota and all of South America. I´ve been connected to so many Indigenous women who are fighting against violence.”

Indigenous women and girls are mutually tied to the state of existence, their lives matter, and we must act now. Demanding Indigenous sovereignty, self-governance, recuperation of ancestral territories, reclamation of languages, cultural practices, and ancestral knowledge are key elements in strengthening the reciprocal relationships Indigenous People have with their lands and their people. Movements for justice go far back to colonial contact and the fight for their stories to be told is critical. There are many untold stories and by opening more spaces, creating, shifting narratives for MMIWG to be seen and acknowledged is just the beginning. As Williams emphasizes, acknowledging the lives of Indigenous women and girls goes a long way.

Anyone can help put a  stop to the violence. Williams concluded with these words on how to get involved, “Support rallies, vigils, show up. Everyone has their own gifts, expertise in something and if they can use that to help us, to support us, that is amazing. There are so many people behind the scenes like in advertising, childcare. People have their gifts and expertise and alleys can support that way. To the media, print these stories and interviews.” Visit Butterflies In Spirit to learn more about their work and how you can support.