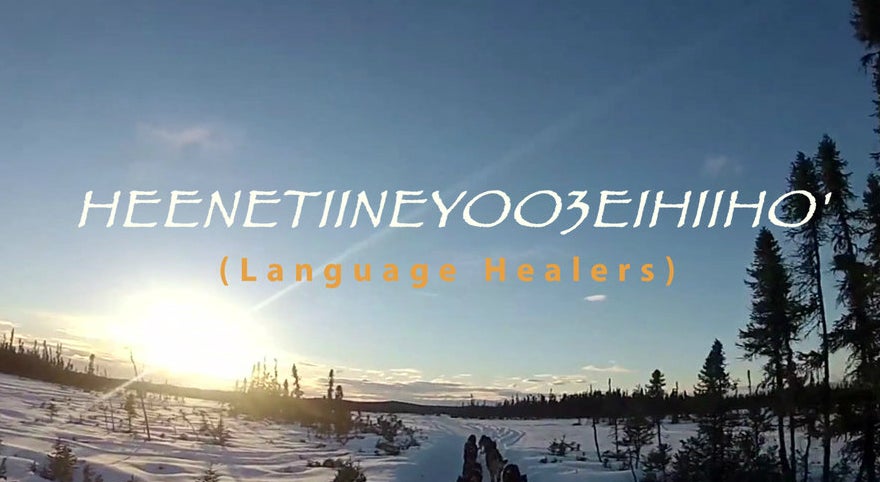 Many Indigenous languages, once prominently spoken across North America, have been threatened as their speakers continue to age and new generations are born into an English-dominant society. For numerous Tribal Nations, the number of native speakers has fallen dangerously low, often into the single digits.

It has been through the efforts of elders, educators, and interested youth that Nations have started to see a movement to re-vitalize endangered languages.

In his documentary film Heenetiineyoo3eihiiho’ (Language Healers), Brian McDermott follows the stories of several native speakers and educators, documenting their trials and tribulations in working towards the re-vitalization of their respective tongues.

“Our generation is the last chance,” said Renée Grounds, Lead Language Instructor of the Yuchi Language Project. ”Because if we don’t do it now, our first language speakers will pass away and our language will go with them.”

McDermott’s film delivers a message that is as powerful as it is important. Focusing on the experiences of those affected by language loss, the significance of language’s cultural role is emphasized. Once lost, the film explains, a beautiful and crucial element of Native cultures will be forever irretrievable.

The film opens with a grim UNESCO statistic, stating: Of the 139 Native American languages still spoken today, more than half of these are at risk of going extinct in the next ten years. It then continues to trace the journeys of several native speakers, including a Yup’ik dog musher, a Tlingit carver, a girl punished for speaking the Menominee language, a teacher at a Yuchi immersion school, and a Montana professor with a method to save endangered languages.

Each of the individuals portrayed in the film have an impactful statement to make regarding the status of endangered languages. Heavily involved in their preservation, they each share how their spoken language is engrained in their understanding of their culture and the history of their people.

Through his directorial lens, McDermott conveys the startling need for urgency in the conservation of linguistic treasures on the cusp of extinction. He provides the audience with a personal portal into the truth behind endangered languages, demonstrating that their loss would greatly diminish our understanding of North America’s first peoples.

“What do you do if somebody you loved becomes deathly ill,” said Dr. Greymorning, Southern Arapaho and Professor at The University of Montana in regards to the preservation of endangered languages. “Do you do everything possible to heal them, to try and find a way to get that person’s health back in balance?”

Language Healers is EmpathyWorks Films Company production. It was recently selected to be screened at the 10th Al Jazeera International Documentary Film Festival. It will be shown here between the 23rd and 26th of October.