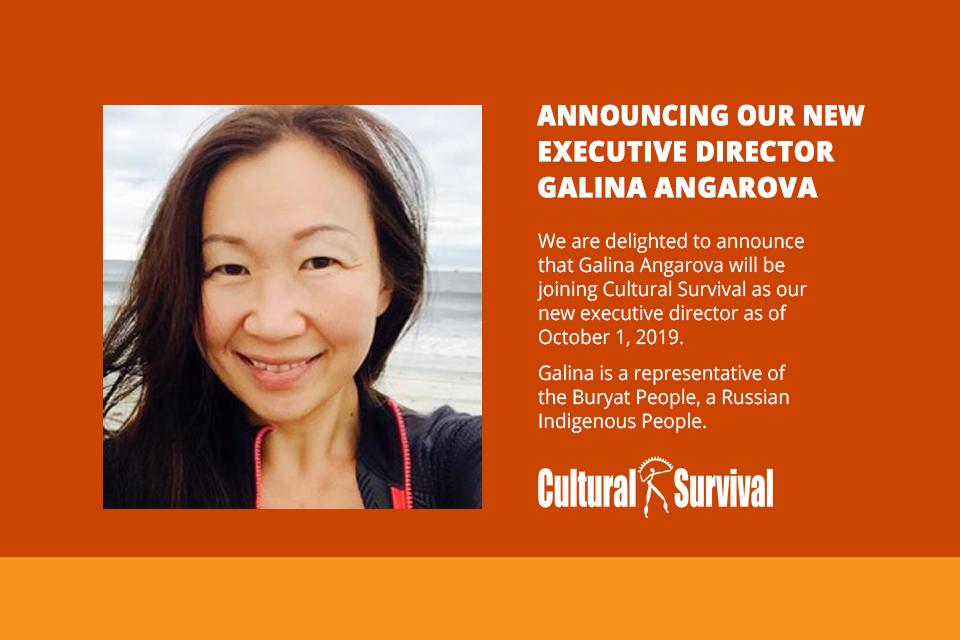 On behalf of the board of directors, I am delighted to announce that Galina Angarova will be joining Cultural Survival as our new executive director. She will be based out of the San Francisco Bay Area.

Galina is a representative of the Buryat People, a Russian Indigenous People. She comes to Cultural Survival after serving as program officer at the Swift Foundation. Before, Galina worked as policy and communications advisor for Tebtebba. She has represented the Indigenous Peoples’ Major Group at the United Nations on issues such as the Sustainable Development Goals and the Post 2015 Development Agenda and has led Indigenous experts to review safeguards for Indigenous Peoples for the UN Framework Convention on Climate Change’s Green Climate Fund. Prior, Galina was the Russia program director at Pacific Environment and organized direct actions to block pipeline construction in the Altai region of Siberia, to close a toxic paper mill on Lake Baikal, and to stop a hydro-dam from flooding Evenk Peoples’ lands. Galina holds a Master’s Degree in Public Administration from the University of New Mexico and a Bachelor of Arts in Linguistics and Teaching Methodology from the Buryat State University, in Ulan-Ude, Russian Federation. She served on the board of International Funders for Indigenous Peoples for seven years.

Galina’s expert knowledge and experience working on Indigenous rights, human rights, racial and social justice, land rights, and gender inequality is complementary to Cultural Survival’s mission to advance Indigenous Peoples' rights and support Indigenous communities’ self-determination, cultures, and political resilience. Her extensive experience in program management and work in regions of North, Central, and Latin Americas, Russian Far East and Siberia, and Africa will expand Cultural Survival’s global reach. We look forward to Galina’s leadership in implementing our vision of a future that respects and honors Indigenous Peoples' inherent rights and dynamic cultures, deeply and richly interwoven in lands, languages, spiritual traditions, and artistic expression, rooted in self-determination and self-governance. Please join us in welcoming Galina. She will commence her role on October 1.

As Cultural Survival nears its 50th anniversary, I also remind you that Cultural Survival relies on individuals like you to do our work. We are launching the New Leadership Transition Fund to support Cultural Survival and the new Executive Director to go through the transition period, build on our successes, guide the organization to new work to address the realities of the ever changing world, and come up with an updated strategic direction. When you give to Cultural Survival, you are helping to build something. You are investing in the defense of Indigenous Peoples’ rights, lands, and cultures. And you are investing in Indigenous women and youth. We hope we can count on you as we embark on a new era with a new leader.