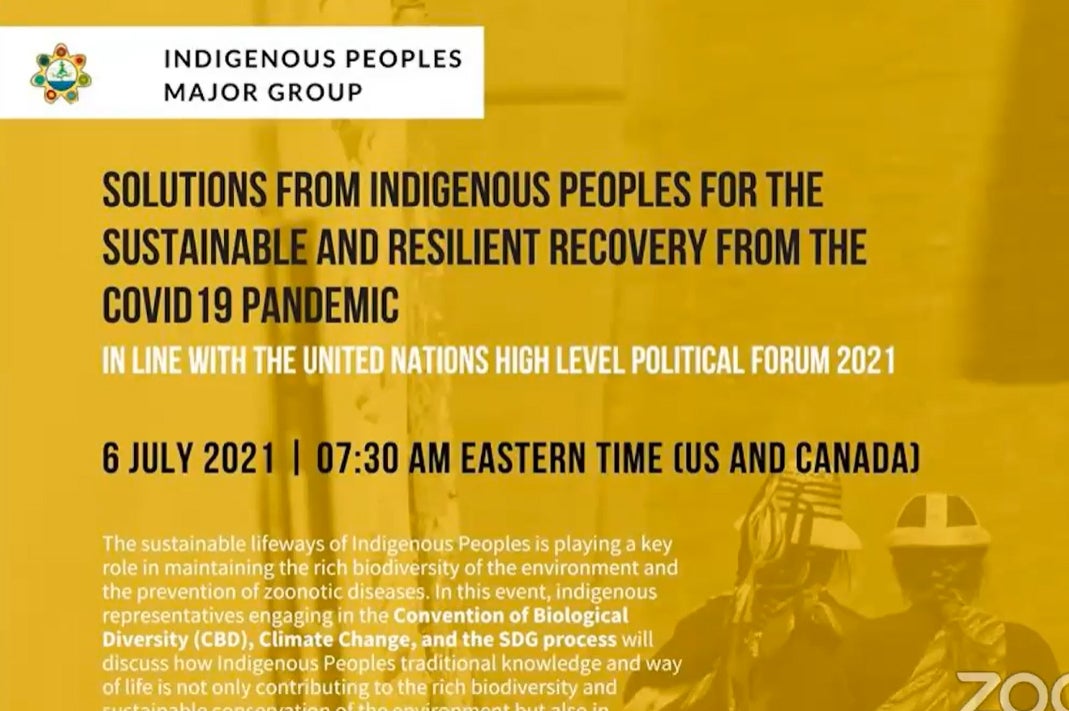 The Intergovernmental Panel on Climate Change projects that we have less than 12 years to avoid a definite future of catastrophic consequences. The High Level Political Forum (HLPF) is the core United Nations platform to discuss these repercussions. There, representatives review the global sustainable development goals set for 2030 and follow-up with nations about their commitments to combat climate change.

On July 6, 2021, Indigenous representatives gathered at a side event in line with the 2021 High Level Political Forum to discuss their initiatives towards fostering biodiversity and sustainability. The webinar, Live: Solutions from Indigenous Peoples for the Sustainable and Resilient Recovery from the COVID-19 Pandemic, hosted four speakers, each involved with an organization focused on promoting Indigenous and environmental rights. It was co-organized by the The International Indigenous Forum on Biodiversity (IIFB), the International Indigenous Peoples Forum on Climate Change (IIPFCC), and the Indigenous Peoples Major Group for Sustainable Development (IPMG), which coordinates the participation of Indigenous Peoples in global conversations about climate action. Each speaker discussed the 17 United Nations Sustainable Development Goals (SDGs), which urge for clean energy, no poverty or hunger, responsible consumption, and widespread climate action.

Speakers noted that COVID-19 is a prime example of the importance of human-nature relationships. The virus is a zoonotic disease— caused by germs spread between animals and humans— demonstrating the interconnectedness of all beings. The health of nature directly influences the health of humans. We, after all, are nature as well. Speaker Joan Carling (Kankanaey) highlighted that Indigenous values prioritize this interconnectedness and harmony. There are 476.6 million Indigenous Peoples across 93 countries, making up 6.2 percent of the global population. Indigenous communities protect 80 percent of the world’s biodiversity, manage or hold tenure over 25 percent of the world’s land surface, and care for at least 24 percent of the total carbon stored above ground in the world’s tropical forests, yet only 10 percent of Indigenous land is legally recognized.

Joan Carling, an Indigenous activist from the Cordillera, Philippines, highlighted that the United Nations’ acknowledgment of Indigenous ecological practices is essential for achieving the Sustainable Development Goals. Carling is currently the co-convenor of the Indigenous Peoples’ Major Group (IPMG) for Sustainable Development and works directly with Indigenous organizations and networks across the globe. She began the webinar with an introduction to Indigenous Peoples, including worldwide commonalities, challenges, and sustainable solutions that are incorporated into Indigenous values. She also talked about new challenges that are a direct result of the pandemic.

Two of the biggest challenges that Carling noted were due to COVID-19 and the nature of the Sustainable Development Goals. Because the pandemic has shifted many events to occur virtually— including this event— many people cannot participate if they do not have access to technology. Indigenous participation is limited because of a lack of facilities and infrastructure in some rural areas. Carling stressed that the United Nations must find a way to ensure that Indigenous Peoples can still effectively participate in all meetings. Another worry arises from the innate qualities of the Sustainable Development Goals. Participation in these goals is voluntary for nations. States are not required to implement climate change actions, nor are they held accountable if they do not fulfill the goals as promised.

Yet, in order to achieve success in implementing the Sustainable Development Goals globally, Indigenous Peoples must be recognized as protagonists in each step of the implementation process across all of the goals. Indigenous Peoples’ key contributions to environmental protection and sustainable development include innovations such as non-timber forest products, worldviews of interconnectedness and responsibility, and the use of flora and fauna for good health. Carling stated that governments must recognize these contributions and fight bias in order to respectfully include Indigenous Peoples in their decision making.

Joji Carino (Ibaloi-Igarot), the webinar’s second speaker, agreed. She presented the Convention on Biodiversity (CBD) vision: “By 2050, biodiversity is valued, conserved, restored, and wisely used, maintaining ecosystems services, sustaining a healthy planet and delivering benefits essential for all people.” Indigenous Peoples already have this vision, Carino noted, but the mainstream economic systems need to be transformed to move towards the 2050 vision.

Joji Carino is Ibaloi from the Cordilleras Highlands of the Philippines. She is the Senior Policy Adviser of the Forest Peoples Programme, and has helped to organize networks of Indigenous Peoples to create their own Community Based Monitoring and Information Systems. Carino noted that the Convention of Biodiversity has further created milestones to be reached by 2030. Carino discussed a few of the most important milestones regarding the rights of Indigenous Peoples.

One notable target, known as the ‘30x30 Initiative’ is to protect and conserve, by the year 2030, at least 30 percent of the planet (land and water) with a special focus on areas particularly important for biodiversity. Because Indigenous Peoples protect 80 percent of the world’s biodiversity, these regions are most often customary lands of Indigenous communities. This milestone must be accompanied by very strong human rights frameworks and recognition of customary lands to protect Indigenous Peoples from outside land-grabbing, says Carino.

She also drew attention to a milestone seeking to ensure that quality information, including traditional knowledge, is available to decision makers and the public for the effective management of biodiversity. “This target is actually giving equal attention to science as well as Indigenous knowledge,” she said. “However, it does not make clear the safeguards to use and access traditional knowledge to make this a reciprocal and respectful relationship.”

When asked how audience members could participate, Carino suggested doing grassroots advocacy to address governmental challenges, which in turn influence UN negotiations. She further noted that it is quite easy for organizations to register as observers for the UN High Level Political Forum and the UN Biodiversity Conference if you would like to participate further.

The third speaker, Graeme Reed, discussed advancing Indigenous-led solutions to address the climate crisis. Reed is from Canada, of mixed Anishinaabe and European descent. He is a Senior Advisor at the Assembly of First Nations, focusing especially on climate action, environmental assessment, and energy. In Indigenous worldviews, Reed expressed, climate action encompasses a wide variety of topics. Not only does it include food security and sovereignty, but also Indigenous knowledge systems and the revitalization of language and culture. All of these are connected and must be addressed. Language, for example, is a manifestation of worldview. If a community has a word for an idea that is indescribable in other languages, it demonstrates what is important to that community. It means that this concept will be prioritized and protected. In this way, Indigenous sovereignty and climate action are directly linked. Systems must be transformed to not only accommodate Indigenous worldviews, but to empower and responsibly use Indigenous knowledge and practices.

Basiru Isa, an Indigenous youth activist from Cameroon, expanded on this point by recognizing how Indigenous Peoples contribute to sustainable development by consciously not over-exploiting landscapes and by mitigating carbon emissions through forest protection. He further provided recommendations for achieving the 17 Sustainable Development Goals. Isa suggested that the United Nations implement international human rights frameworks and hold states accountable, recognize and protect Indigenous Peoples’ rights to land, and establish effective ways for Indigenous Peoples to fully participate in all stages of UN negotiations.