First Ever World Indigenous Games To Be Held in Brazil 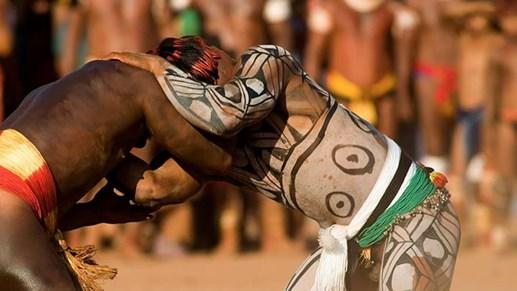 For the first time in history, from October 23 to November 1, 2015 Indigenous people from all over the world will gather in the city of Palmas in the Amazon jungle state of Tocantins, Brazil, to compete in the first World Indigenous Games. Over 2,000 athletes representing nearly 50 different ethnic groups (including 22 groups from Brazil alone) will participate in a variety of events, from a few Western-style games to many Indigenous traditional games. Some events will be competitive, such as canoeing, archery, the spear toss, and the 100m rustic race, while others will be demonstrative events, such as the football-like game of xikunahity, in which players control the ball only with their heads. So far, 40 men’s teams and 40 women’s teams have been confirmed.

During the official announcement of the Games to the United Nations back in April, organizer Marcos Terena explained that the World Games of Indigenous People is a decades-long dream finally being realized that represents a major achievement of Indigenous Peoples, in partnership with the Brazilian Government’s Ministry of Sport and the United Nations Development Program. The Games are run by the Inter Tribal Council, a Brazilian Indigenous peoples NGO that has organized Brazil’s national Indigenous Games since 1996. At the 14th session of the UN Permanent Forum on Indigenous Issues, Brazil’s Minister of Sport George Hilton addressed over 100 Indigenous men and women, UN officials, journalists, and government representatives at the UN headquarters in New York, saying, “These games celebrate the lifestyle, the harmony with nature, and the diversity of Indigenous people of all ethnicities.”

Cree Canadian lawyer, former member of Parliament and Honourary Chief Willie Littlechild will be attending the games with his family. Chief Littlechild credits sports for helping him survive the trauma of the infamous residential schools, and he started Canada’s first all-aboriginal hockey team in Alberta, encouraging his players to focus on their education. He was also a founder of the North American Indigenous Games. Of this year’s World Indigenous Games, he said “We wanted to be there for this historic event. It was 38 years in the making.” A relatively new, rapidly developing city in close proximity to Indigenous communities, host city Palmas hopes to show Brazil and the rest of the world “a civilization firmly rooted in sustainability, cultural diversity, quality of life, and prosperity.”

For the first three days, the delegates will mingle with each other and be shown the touristic hubs of Palmas, with the next 10 days comprising the competitions and sporting demonstrations. An additional aspect of the Games will be comprehensive programs of discourse and celebration of culture, including the latest Indigenous People’s Social Forum, activities for Indigenous women, a lecture series, and various fairs, all forums in which participants can discuss human rights and environmental issues.

Fittingly, the motto of the first World Indigenous Games is “En 2015, somos todos indígenas,” meaning, “In 2015, we are all Indigenous [people].” However, despite such well intentioned branding, the event does not come without controversy. Leaders from two Indigenous groups in Brazil, the Kraho and Apinaje tribes, announced their refusal to take part in the games, citing the Brazilian government’s failure to address concerns about land rights and violence in many Indigenous communities across the country. The Union Association of Apinajé-Pempxà Villages said: “[We] cannot accept and participate in a sensationalised media event which aims to use image of Indigenous peoples to distort the facts and lie abroad; hiding the true reality and suffering of the Indigenous Peoples of Brazil.”