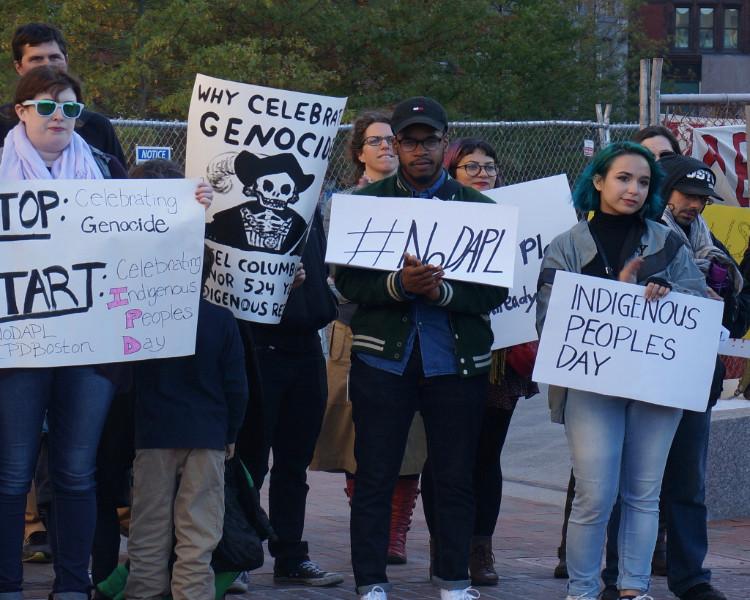 The celebration of Columbus Day for the past century in the US has perpetuated a narrative that glorifies a Eurocentric world view, while allowing us to ignore a history of violence and oppression towards Indigenous individuals throughout Turtle Island/Abya Yala, lands which were mistakenly referred to by Columbus as "The New World."

"We believe it is important to hear the other side of the story-- the Indigenous side-- because there are detrimental implications to learning about the side of history that makes heroes of colonizers, and erases those who were colonized" say Shaldon Ferris and Avexnim Cotji, Indigenous Rights Radio producers.

Together, we can recognize this history of violence and honor Indigenous resistance by starting conversations about ending the commemoration of Columbus Day in our communities.

1. Indigenous Peoples Day
It's time to recognize that celebrating the life of Christopher Columbus is the same as celebrating the erasure of Indigenous existence. IRR Producers Shaldon Ferris and Avexnim Cojti uncover the history of Indigenous resistance to colonization and the "discovery" narrative that perpetuates the celebration of Columbus.

2. "Our sacred objects are not to be hung on walls for decoration."
Indigenous Rights Radio Producer Avexnim Cojtí Ren investigates the movement to repatriate sacred objects, remains, and cultural patrimony taken without consent from Indigenous Peoples by governments, collectors, and individuals. Concepts of ownership, histories of oppression, methods of legal recourse, and recent examples of repatriation attempts all play an important role in the prospects for the return of heritage items to Indigenous Peoples.

Through Cultural Survival's Indigenous Rights Radio program, our Indigenous radio producers bring you the latest information on Indigenous Peoples' rights and how they are being implemented around the world.

Browse our full program library, featuring radio content in over 30 languages, at rights.culturalsurvival.org