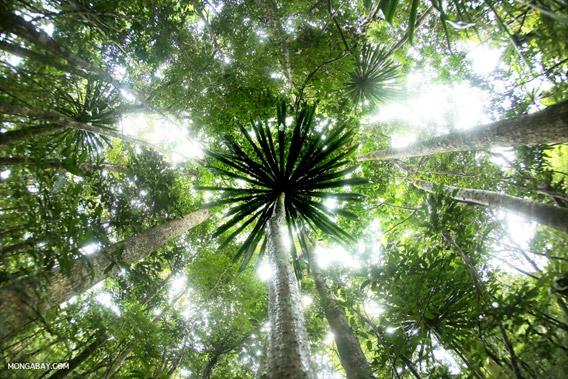 Under REDD+, in return for not allowing extractive industries to destroy forests, countries are granted monetary rewards equivalent to what they would have received from those industries. The UN report on the program, released in February, states that “REDD+ can be a mechanism for achieving sustainable development outcomes that benefit tropical forests and their populations while simultaneously delivering climate change mitigation benefits. For indigenous peoples and other forest-dependent communities concerned with securing rights and enhancing sustainable livelihoods, REDD+ may offer both a promising new policy environment and access to resources that enable those rights and livelihoods to be realized.”

The report lists many potential downsides for indigenous communities stemming from the program, including:

-     Inability to participate effectively due to lack of information

-     Increased tension between indigenous groups and the government

It also admits that “whether the impact of REDD+ policies and activities on indigenous peoples will be positive or negative will depend largely on the recognition of their rights, their level of participation, and the nature and effectiveness of safeguards to be applied at the international and national levels,” though it offers no path to address this ambiguity.

Seeing the list of potential harm to indigenous peoples resulting from REDD+, it is difficult to see how the UN managed to remain upbeat in their report. Nonetheless, they insisted that the possible positive benefits such as recognition in legislation and public policies of indigenous land tenure rights, enhanced respect for and implementation of indigenous knowledge regarding ecosystem protection, increased revenue, new modes of income, and enhanced maintenance of regulatory ecosystems to help manage the effects of climate change far outweigh the negative.

However, the report made an unfortunate misstep in classifying indigenous people who oppose the REDD+ as “radical.” Bruce “Tom” Goldtooth, executive director of the Indigenous Environmental Network, took exception to this and addressed it at a UNPFII meeting:

“Mr. Chairperson, we do not believe it is radical to oppose a market system that allows multinationals to continue to pollute our peoples in the north with the expansion of fossil development with tar sands and its web of pipelines, coal mining, shale gas, hydraulic fracturing, polluting refineries and the like, while threatening the very identities and rights of our brothers and sisters in the South,” he said. “The implementation of [REDD+ program] in California, Mexico, Brazil, Nigeria, and Indonesia are doing just that.”

Many indigenous groups argue that many countries participating in  REDD+ programs do not adhere to Free, Prior, and Informed Consent (FPIC). Of the 16 UN-REDD countries with national REDD programs, 10 of them have violated FPIC. “Vietnam has received 4.38 million USD from REDD+ without even recognizing indigenous peoples, much less their land tenure,” Goldtooth pointed out. Goldtooth’s statement was support by the Seventh Generation Fund, American Indian Law Alliance, and Tonatierra.

Goldtooth argued that the UN report demonstrated “cultural chauvinism” and the “same paternalism that accompanies colonization.” Some indigenous groups, such as the National Coordination of the Indigenous Peoples of Panama (COONAPIP), have withdrawn support for REDD+ entirely and urged other indigenous groups to “proceed with caution and take the necessary measures to avoid being tricked by United Nations bodies and officials.” At another meeting, Joan Carling of the Asia Indigenous Peoples Pact (AIPP) cautioned that just as she could not speak for all indigenous peoples collectively, NGOs also had to be careful not to speak for the indigenous communities: “We notice that a lot of NGOs are working, so called working, closely with indigenous peoples but are imposing their ideological views. And yet at the end of the day, what happens to the forests will affect the lives of indigenous peoples.”