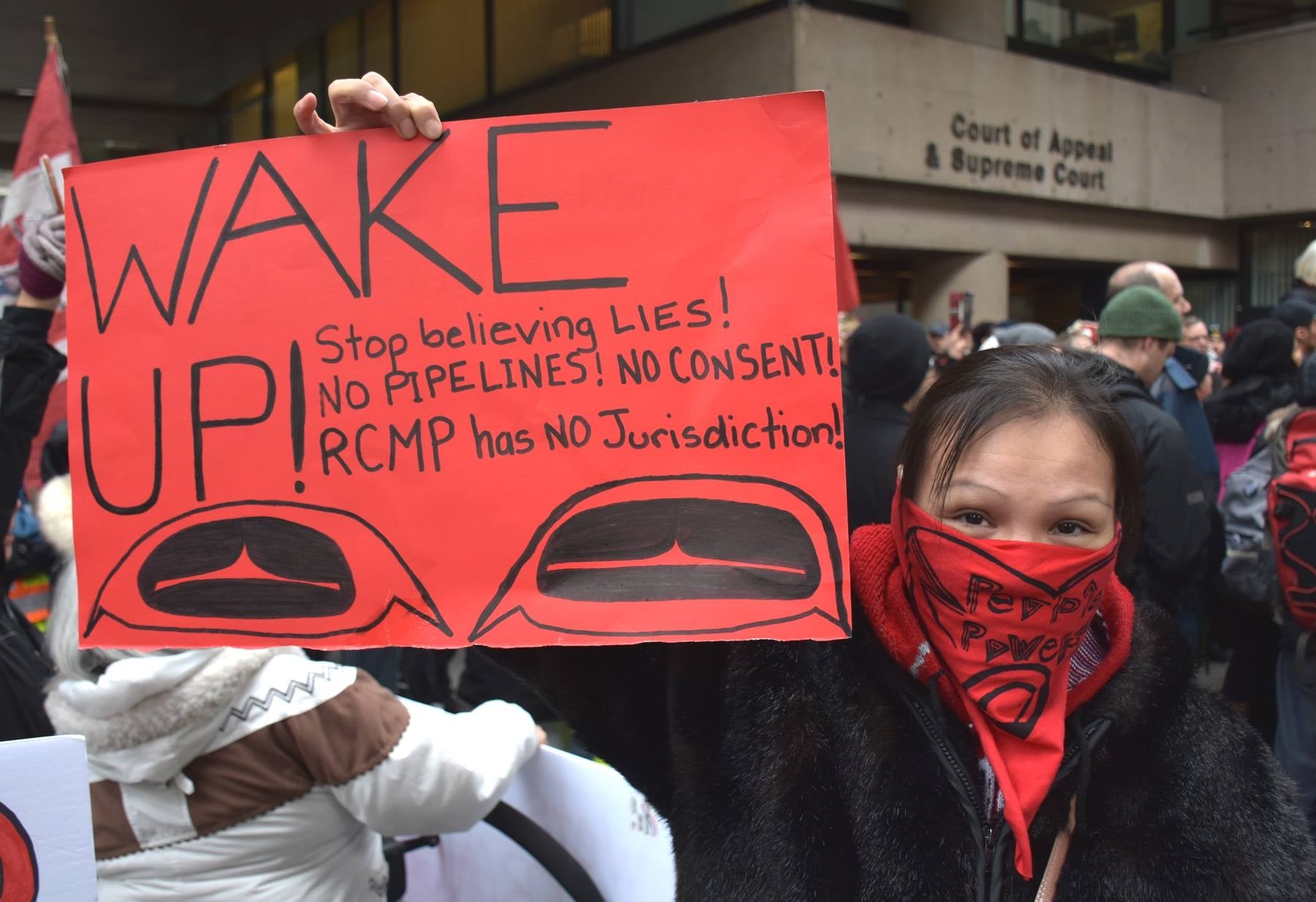 Tse Wedi Elth/Unist’ot’en Camp in British Columbia, Canada is Cultural Survival’s Keepers of the Earth Fund grant partner. The Unist’ot’en Camp was founded in 2010 by Wet’suwet’en hereditary Chiefs. Its mission is to protect Unist’ot’en territory by re-establishing traditional Indigenous governance systems and enacting an FPIC protocol for all activities on Unist’ot’en land. The Unist’ot’en Camp sits in the “energy corridor” for pipelines in Canada and is under threat from oil spills and devastating destruction of the environment. They have been fighting the construction of a 416 mile (670 km) liquified natural gas pipeline, Coastal GasLink, which they have not consented to. The pipeline would cross through Wet’suwet’en territory. As a clan of the larger Wet’suwet’en Nation, the Unist’ot’en are represented by chiefs Knedlebaes, Weli’, Lht'at'en, Maskaboo and Gohawk. Traditional Wet’suwet’en knowledge about the land is used to govern the types of activities that can take place on their territory, as the Indigenous Nation in British Columbia never signed a treaty with the colonial authorities, meaning that federal government operates in a vacuum of authority on their lands.

Despite this, on December 14, 2018, a provincial court in British Columbia granted an injunction to oil and gas company TransCanada, giving them access to the pipeline construction site. The land protectors have been camping out for weeks in bitter winter conditions at  barricaded checkpoints to prevent gas pipeline construction vehicles from entering the territory of the Wet’suwet’en Nation. They have been effortlessly protecting the sacred water flows that provide life to all living beings in the area. The land protectors are peacefully defending the survival of all future generations for all nations.

On January 9, 2019, heavily armed Royal Canadian Mounted Police raided the camp and arrested 14 Indigenous land defenders. As many watched in horror, people pulled together to voice injustice. A call for international action was organized on January 8, where 67 national and international nations marched in solidarity with Wet’suwet’en. All nations across Turtle Island united, standing together for Indigenous Peoples Rights. Cultural Survival condemns this act of violence and reiterates alongside the Wet’suwet’en Nation that their territory in British Columbia was never ceded by treaty and hereditary Chiefs retain authority over their lands. Additionally, in 2010, Canada endorsed the UN Declaration on the Rights of Indigenous Peoples and is obliged to respect, protect, and fulfill the rights of Indigenous communities. As the Unist’ot’en camp says, “This fight is far from over.”

Please take action to support the Unist’ot’en Camp - a list of ways to support can be found here. 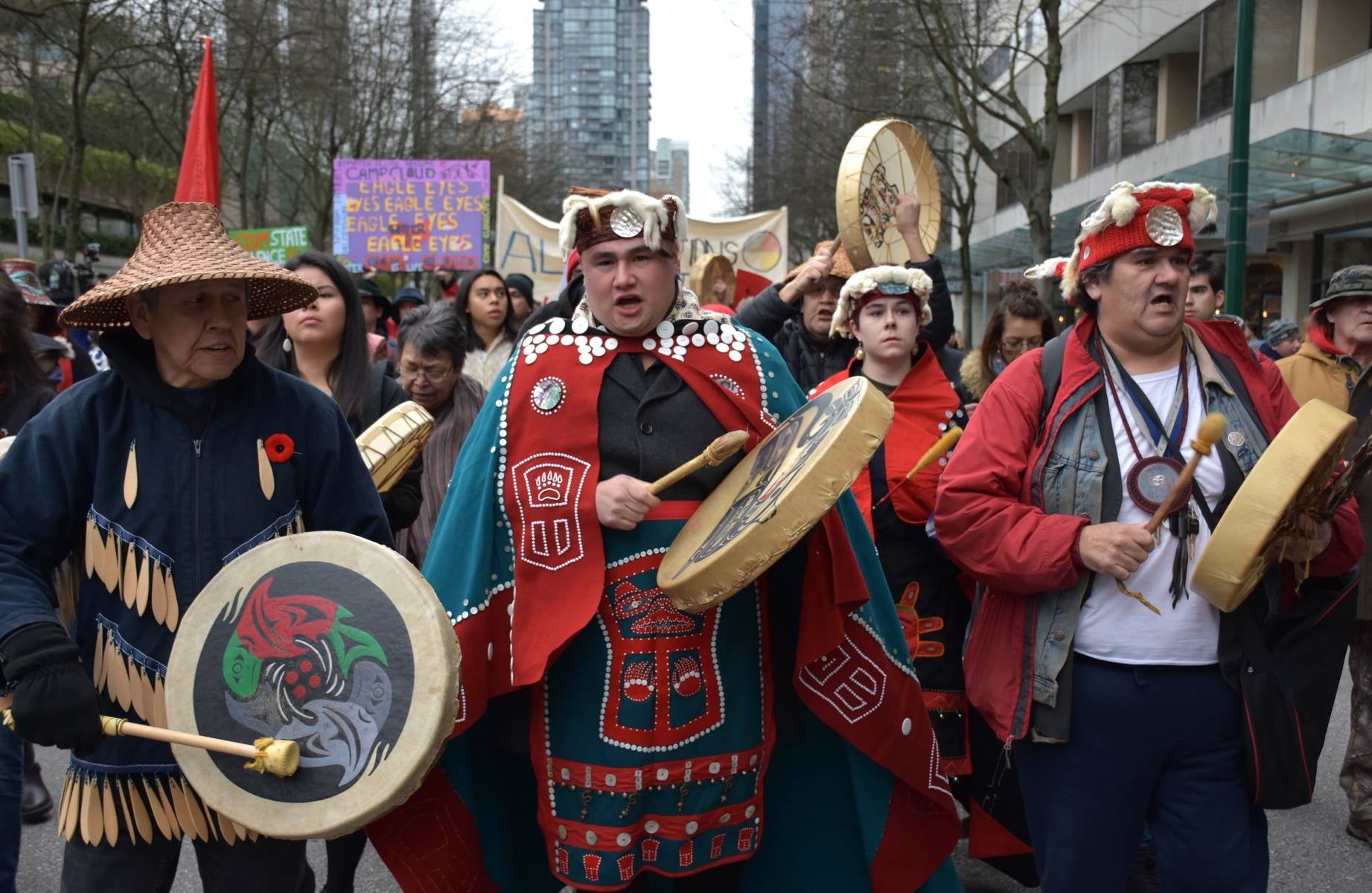 Solidarity With The Wet'suwet'en Rally in Vancouver.

Close to 1,500 people marched through downtown Vancouver on January 8, in support of Wet'suwet'en sovereignty and the Unist'ot'en Camp.