Cultural Survival Stands with the Indigenous Peoples of Bolivia 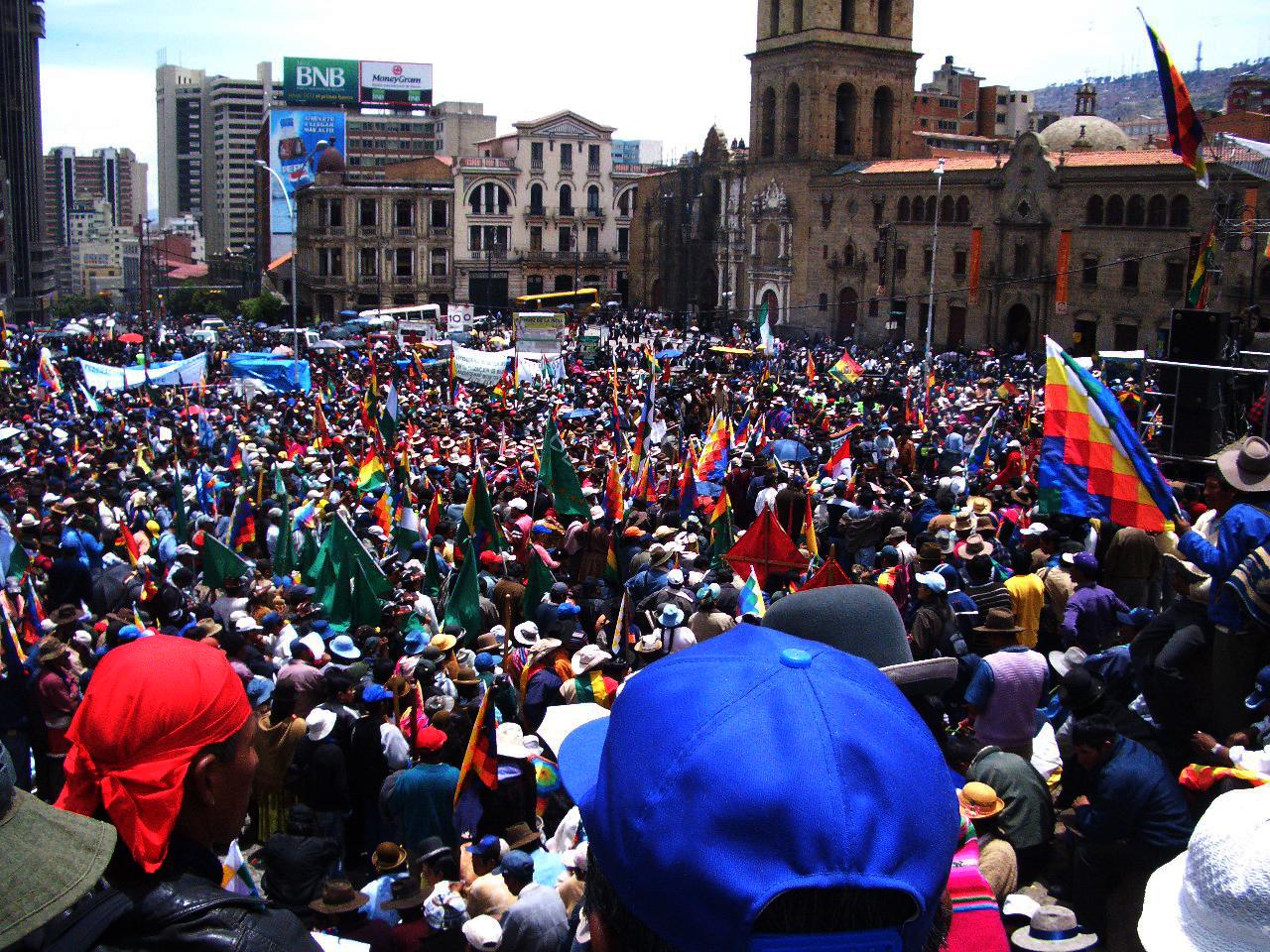 Cultural Survival condemns the use of excessive force and violence in the aftermath of the forced resignation of Bolivian President Evo Morales (Aymara), the country’s first Indigenous president, after 10 days of public protest.

Morales fled to Mexico after allegations of election fraud from the Organization of American States. Subsequent protests have so far left 23 people dead, more than 100 injured and multiple incarcerated in different parts of the country.

Senate minority leader Jeanine Áñez Chávez, a right wing evangelical Christian with a history of racist and anti-Indigenous public statements, declared herself interim president, entering the presidential palace brandishing a Bible over her head. She was adorned by the chief of the armed forces with the presidential sash.


In a since-deleted 2013 tweet, Añez declared Indigenous cultural practices as “satanic.” She established her new cabinet on November 13, 2019, without a single Indigenous member. The following day one cabinet position, the minister of culture and tourism, was awarded to an Indigenous woman, Martha Yujra Apaza.


As Añez stokes anti-Indigenous sentiment, videos spread on social media showing the burning of the Indigenous Wiphala flag and police ripping the flag off their uniforms. In reaction, thousands have taken to the streets to wave the Wiphala, which Evo Morales had declared official alongside the Bolivian state flag. A police chief has issued a public apology for the video of the police defacing their uniforms. Añez has since responded to the outcry from her 2013 tweet by stating "It’s important to preserve our cultural practices of our Bolivian people, because they enrich the national identity.”

Due to fear of reprisal, Indigenous community radio station and Cultural Survival grant partner, Radio Pedro Ignacio Muiba, has decided to close their broadcasting until they feel the risks have passed. "The situation is worrying when it affects our right to freedom of expression, when the voices of the Indigenous and campesino movements are being repressed along with the right to protest and peaceful demonstration, when human rights are violated, when collective rights of Indigenous Nations and Peoples are being threatened by the current transition government... all of this has been happening in the days since the government has been taken over. Since the elections at the end of October through today, a whole chain of disinformation has been set off, and the mainstream media has been complicit. They haven't helped to show the different sides of the story, and have actually helped empower racism and discrimination towards Indigenous peoples by the radical groups of the ultra-right. Supposedly in the name of democracy, they plant seeds of violence, threatening people who do not follow their politics," they stated.

Protests have broken out calling for Morales’ return, and some have been met with violent police repression. On Friday, November 15, when demonstrators tried to cross a military checkpoint in Sacaba, a town near Cochabamba, protesters said police fired at the crowd, killing 8. Many of the protesters were coca leaf growers supportive of Morales.  The day before the massacre, Añez issued a presidential decree “exempting from criminal responsibility” soldiers  who use force against protesters, according to the Inter-American Commission.

Indigenous leader Maria Eugenia Choque Quispe, former President of the Bolivian Supreme Electoral Tribunal, international expert on Indigenous rights and a former Vice-president and expert member of the United Nations Permanent Forum on Indigenous Issues (2014-2016) was arrested on November 10 and detained at the Obrajes’ Prison for women in La Paz, Bolivia as of November 12, 2019. The charges against her are related to the recent electoral process. Choque and family members have received threats of physical harm as reported to the Bolivian Ombudsman’s Office.

The Evo Morales presidency has become a symbol of decolonization for the Indigenous Peoples movement globally. However, his legacy is not black and white. Within Bolivia, he has been lauded by Indigenous Peoples for his commitment to indigenizing the country; renaming the country to the Plurinational State of Bolivia, making 36 Indigenous languages official languages, and for nationalizing oil and gas reserves and investing in social programs that helped lift nearly a fifth of the population out of poverty. Under his leadership, the economy grew by an annual average of 4.6 percent since he took office, more than twice the rate for all of Latin America.

On the other hand, Morales has also been criticized by Bolivians both within the progressive left and conservative right, Indigenous and non-Indigenous, for overstepping boundaries after changing the constitution to revoke term limits allowing him to seek a 3rd and 4th term as president, and for high spending on the construction of a luxury presidential palace at the top of a 29-story glass skyscraper in 2018. Indigenous people of the lowland regions of Bolivia have repeatedly protested against Morales’ plans to construct the Tipnis highway through the Bolivian Amazon rainforest without the Free, Prior and Informed Consent of Indigenous Peoples in that region.

Cultural Survival is calling on Bolivian leaders to ensure respect for human rights amid growing instability in the region; in particular the right to freedom of expression, the right to peaceful assembly, and the rights of Indigenous Peoples, who represent a majority of Bolivian population but have historically experienced economic and social marginalization from the Euro-descendant, urban Christian elite.

We urge Bolivian authorities to ensure Maria Choque Quispe’s personal safety and security as well as that of her family, and ensure that the human rights of all detainees are being upheld, especially the right to due process and a speedy trial.