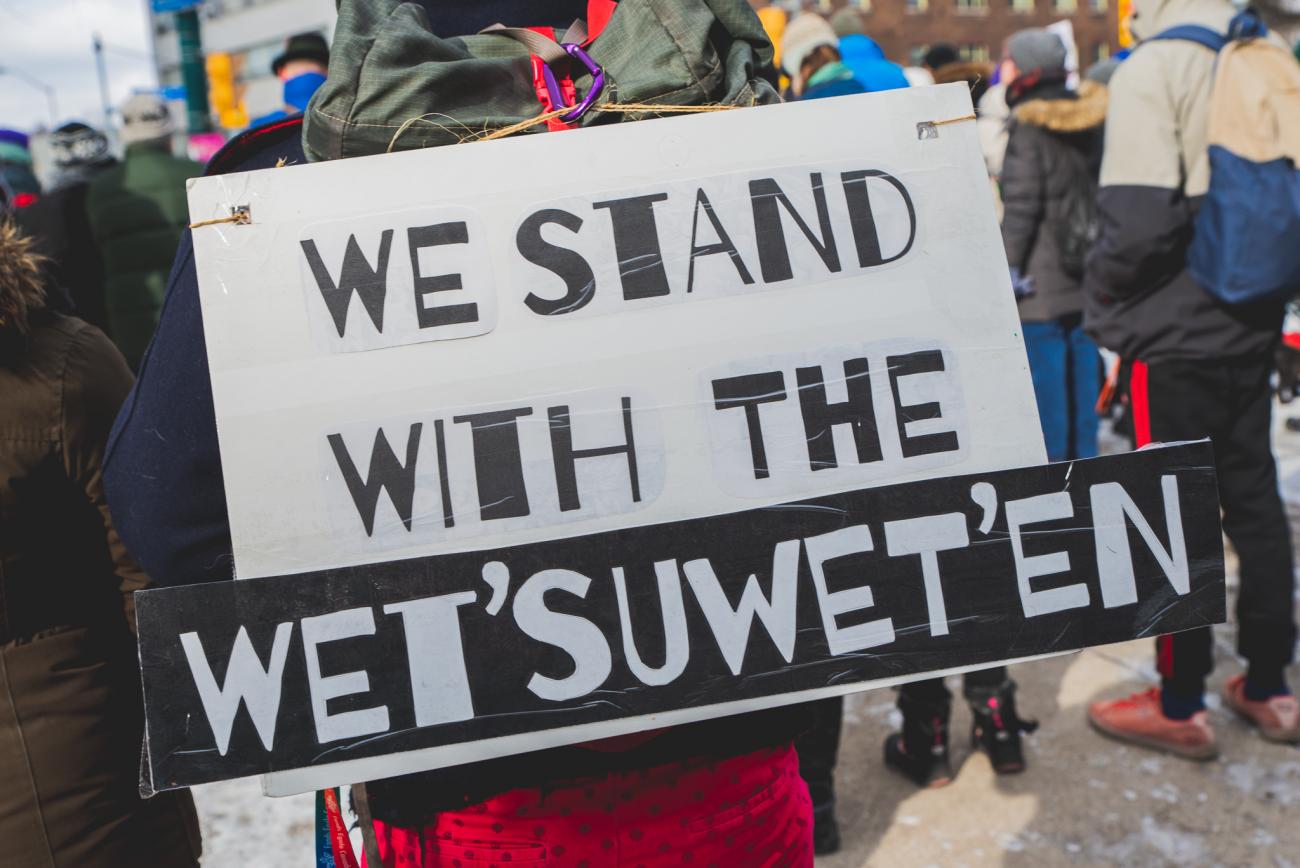 Cultural Survival and Land is Life stand in solidarity with the Wet’suwet’en Hereditary Chiefs in demanding respect for their right to self-determination and to protocols of Free, Prior and Informed Consent as recognized in the United Nations Declaration on the Rights of Indigenous Peoples.

Unist’ot’en Camp leadership explain, “Our clan is occupying and using our traditional territory as it has for centuries. Our free, prior and informed consent protocol is in place at the entrance of our territory as an expression of our jurisdiction and our inherent right to both give and refuse consent.” Today, all Wet’suwet’en territory is unceded. This means the traditional Indigenous legal systems remain intact and still govern the people and the lands.

The Unist’ot’en Camp was founded in 2010 by Wet’suwet’en Hereditary Chiefs to protect their lands. The Camp sits in the “energy corridor” for pipelines in Canada and is under perpetual threat from oil and gas spills resulting in devastating destruction of the environment and Indigenous lifeways.  Most recently, they have been fighting the construction of a 416 mile (670 km) liquified natural gas pipeline, known as Coastal GasLink, which would cross through Wet'suwet'en territory without their consent. On December 14, 2018 the provincial court in BC granted an injunction to oil and gas company TC Energy (formerly TransCanada) - granting access to the land to construct their pipeline. The decision was further enforced by BC Supreme Court injunction on December 31, 2019, allowing construction of the pipeline and unlimited access to Wet'suwet'en lands. However, Wet’suwet’en territory in BC was never ceded by treaty and Hereditary Chiefs retain authority over their lands.

Following the courts’ decisions, land protectors camped out for weeks in bitter winter conditions at barricaded checkpoints to prevent pipeline construction vehicles from entering the territory of the Wet’suwet’en. On January 13, 2019, the Wet’suwet’en Hereditary Chiefs submitted a formal request to the United Nations to monitor the RCMP and Coastal GasLink  actions on their territory. This request follows the recent directive from the UN Committee on Racial Discrimination requiring Canada to halt the CGL pipeline and withdraw RCMP from the territory in order to avoid further violations of Wet’suwet’en, constitutional, and international law.

Instead, on January 19, 2019, heavily armed Royal Canadian Mounted Police raided the camp and arrested 14 Indigenous land defenders. Since then resistance to the pipeline has grown and conflict continued. There have been international calls to action and solidarity actions taken around the world. On January 7, 2020, the Hereditary Chiefs issued an eviction notice to the CGL pipeline company, effective immediately.


Since 2017, Cultural Survival has partnered directly with Unist'ot'en Camp through its Keepers of the Earth Fund, and Land is Life continues to support several grassroots Indigenous organizations across Canada and the Arctic through its Indigenous-Led Grantmaking initiative.

We join together to echo the calls of the Wet'suwet'en Hereditary Chiefs to support their movement in defense of their territory and sovereignty. We call on the Canadian government, RCMP, and TC Energy to halt illegal construction and development, and cease unlawful and violent responses against Indigenous land protectors.