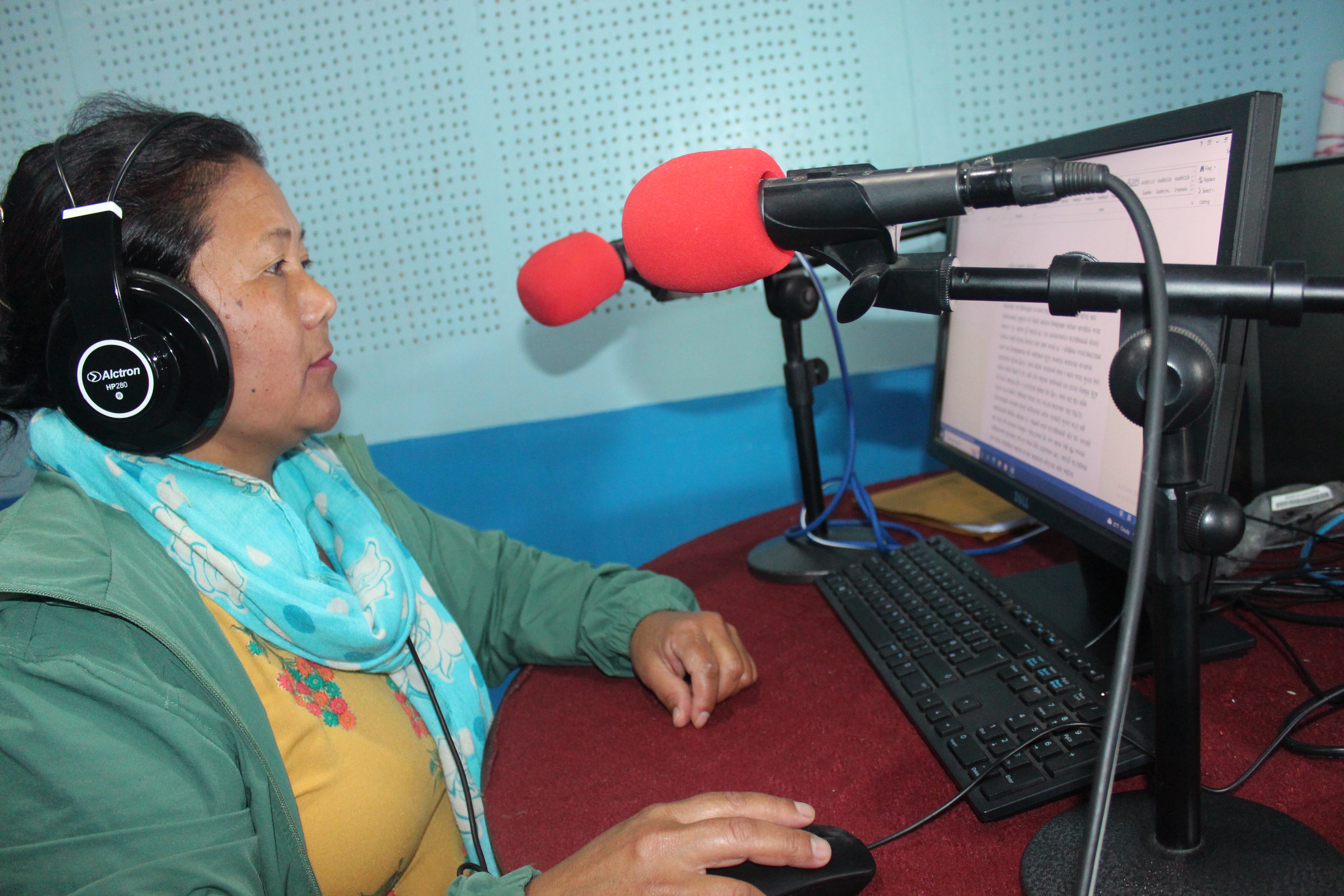 "I am sometimes asked what it’s like living in the 'disaster hit district' and running community radio. People often are surprised by me, being a woman station manager, and their questions are mainly about the role that community radio plays in informing locals living in an area at risk of disaster and the sustainability of radio itself," says Sunita Lama, Station Manager of Radio Jugal, a 2021 Cultural Survival Indigenous Community Media Fund grant partner.

Community radio stations such as Radio Jugal 98.1 FM, which are not affiliated with any political party and dedicated mainly for the welfare of the communities, are not financially strong. "Ten years ago when I was working in radio, there was only one station in the district—Radio Sindhu—but it did not reach every corner of the district. So I had a dream to start a radio station in a remote part of the district. I went to Lisangkhupakhar-5, Sildhunga, in Sindhupalchowk district, close to my village, and established a radio station," says Lama. 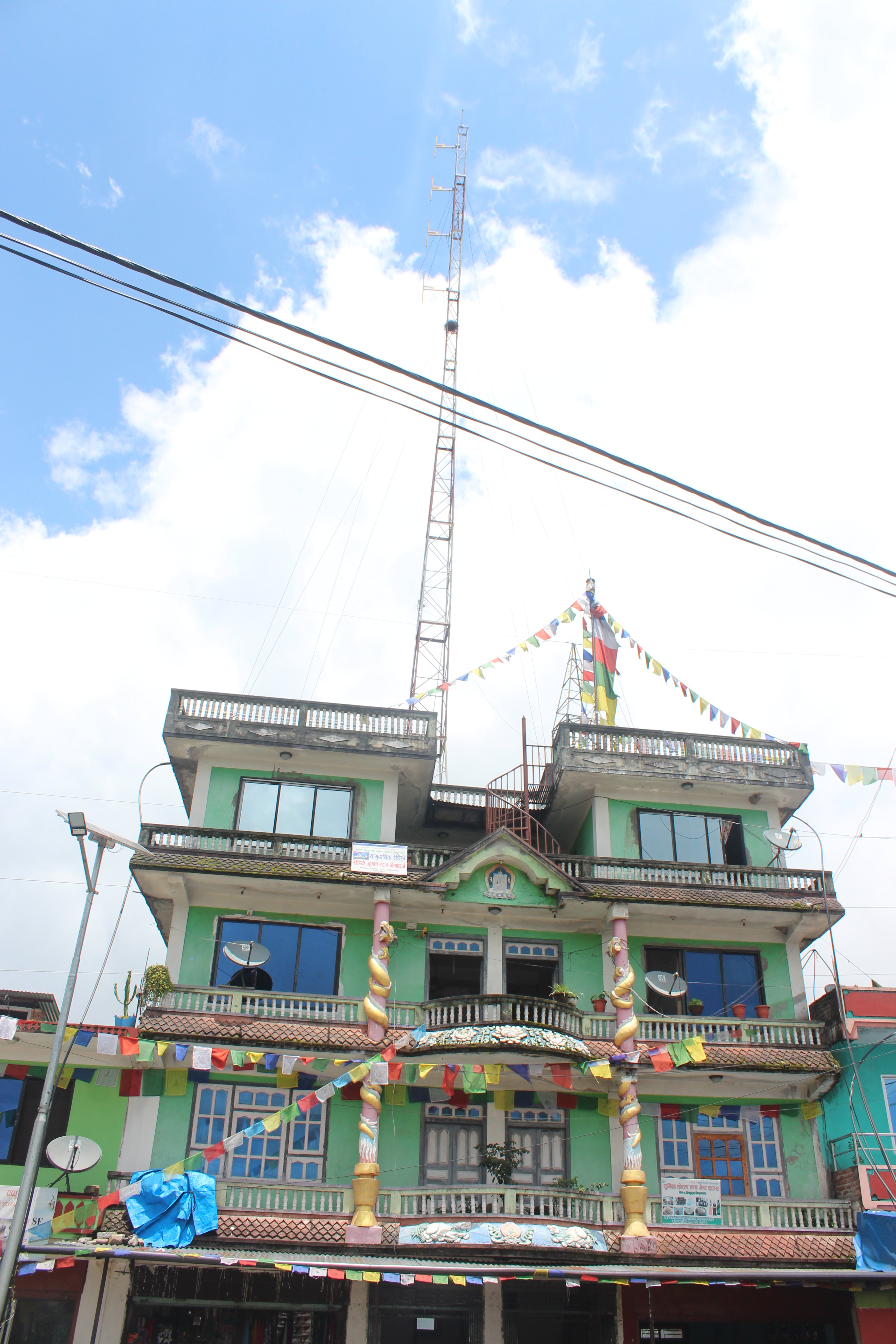 “I believe that although there is increasing use of social media such as Facebook, YouTube, Twitter and other means in the urban areas for people to have information, for the communities living in remote village areas, such as in Sindhupalchowk district, radio is only means to inform a large number of communities at once,” says Lama. “Communities still have huge trust in radio. They have blind faith and huge respect towards radio; therefore, radio has a future.” Lama believes that community radio can be sustainable in the long term as long as communities are happy with the service it delivers. Support from the community is critical to a station’s success.

Radio Jugal is located at Lisankhu Pakhar-5, Sildhunga, Sindhupalchowk district, on the hilltop about 2,200 meters above sea level on the highway leading to Jiri and eventually to Mount Everest. Lisankhu Pakhar is a remote village about three hours away from district headquarters made up of hills and remote villages. Most other stations are located in the district headquaheadquartersthe Melamchi Bazaar (the urban center). Radio Jugal is the only radio station situated on the outskirts of district headquarters and city areas close to Indigenous Peoples’ settlements. It serves the underserved and marginalized Indigenous communities. 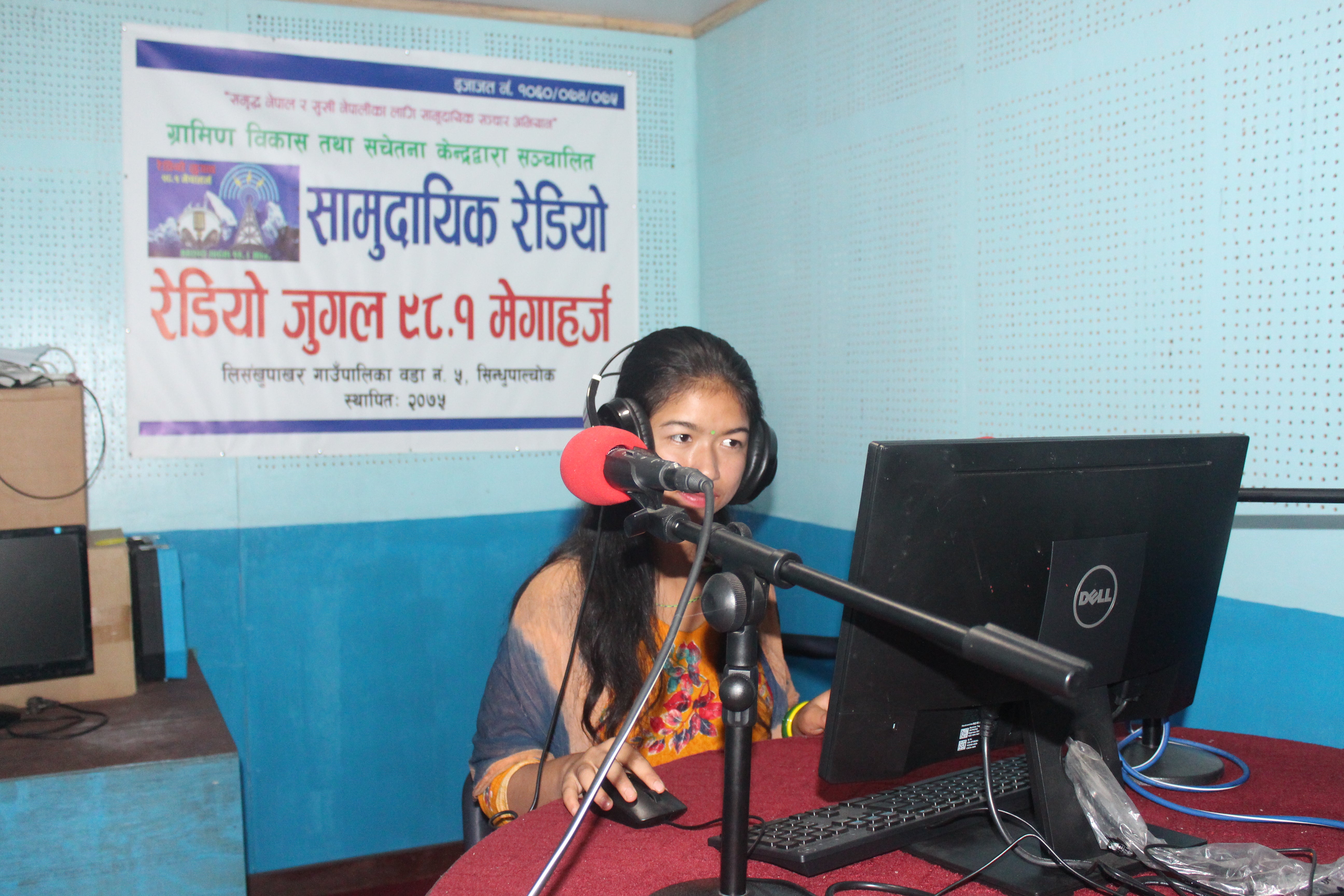 The Sindhupalchowk district is located about 90 kilometers from Kathmandu. It is a mountainous area with densely populated hills and remote villages that do not have access to roads or electricity from the national grid. It has a high vulnerability to natural disasters like landslides, earthquakes, and avalanches due to its uneven geography, high slope, and unsafe settlements. Because of these factors, at a meeting of the Council of Ministers held in July 2021, the government declared Sindhupalchowk and Manang districts as “disaster-hit zones.” Every year there has been significant loss of lives and properties due to monsoon-induced disasters in Sindhupalchowk.

On June 15, 2021, Melamchi Bazaar in Melamchi of Sindhupalchowk was hit by massive flooding. The floods swept away more than 70 houses and several bridges. Several families were displaced and moved to Chautara or Kathmandu after their homes and farmland were turned into ruins. Many families still live in at-risk settlements in Helambu, Panchpokhari, and Melamchi, where there is constant fear of similar flooding. 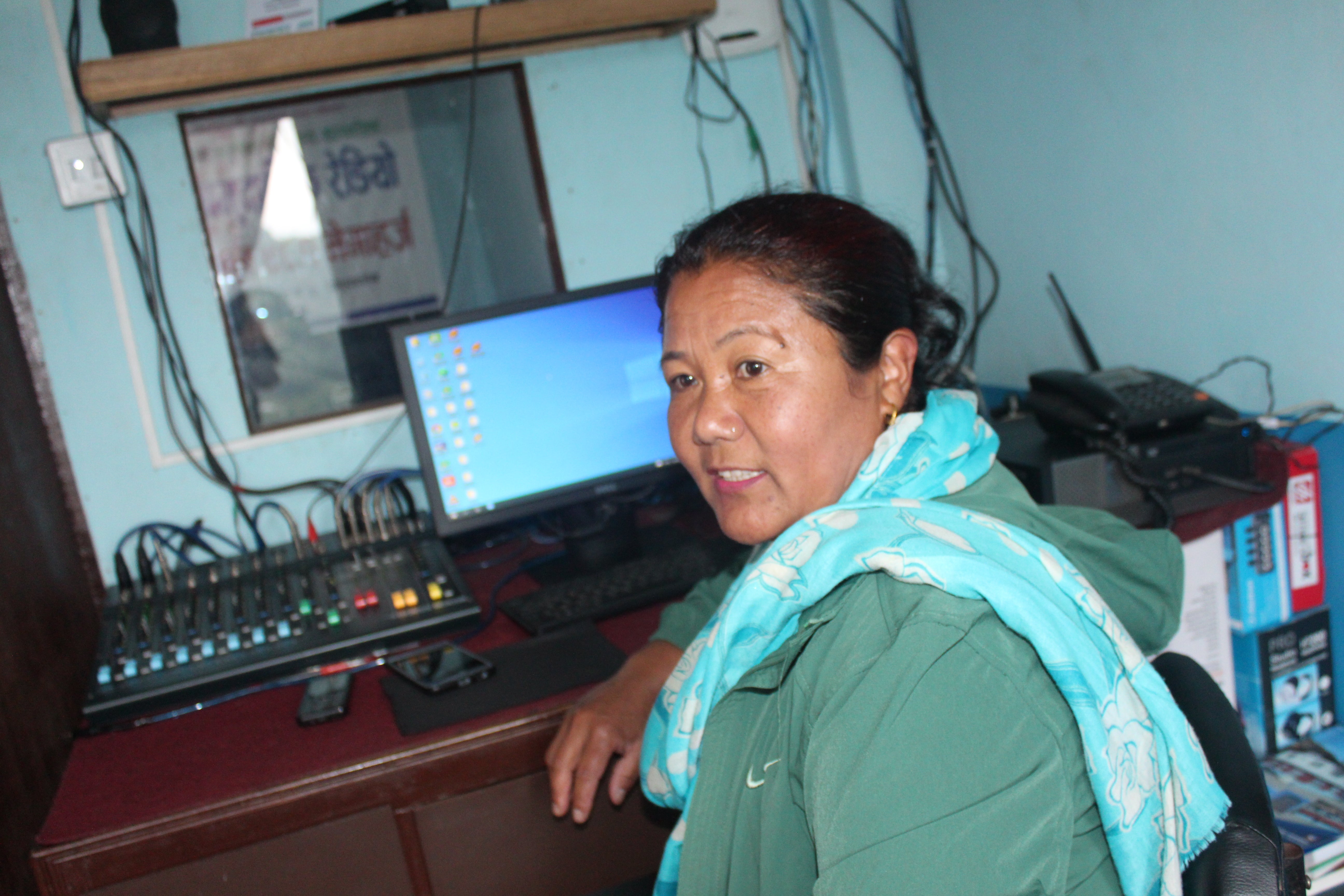 Sindhupalchok district is also one of the worst affected districts by the 2015 earthquake. The first major earthquake, which took place in Nepal, on April 25, 2015, had a magnitude of 7.6. The epicenter was in Gorkha district, about 80 kilometers northwest of Kathmandu. The second major earthquake took place on May 12, 2015, with a magnitude of 6.7 and an epicenter in Sindhupalchowk district. The earthquake resulted in the death of about 9,000 people and badly affected 14 districts. Sindhupalchok district had the highest death toll, with 3,532 people killed.

Radio Jugal is one of the trusted platforms for local citizens for news and entertainment as well as information related to natural disasters. With the support of the Community Media Fund, Radio Jugal served the public with Public Service Announcements about COVID-19, floods, landslides, avalanches, and other potential natural disasters “Radio Jugal has played an immense role in informing people about natural [disasters]. The PSAs mainly aimed at informing communities how to be safe and to keep valuable things in a safe place to be safe from natural disasters,” says Lama. 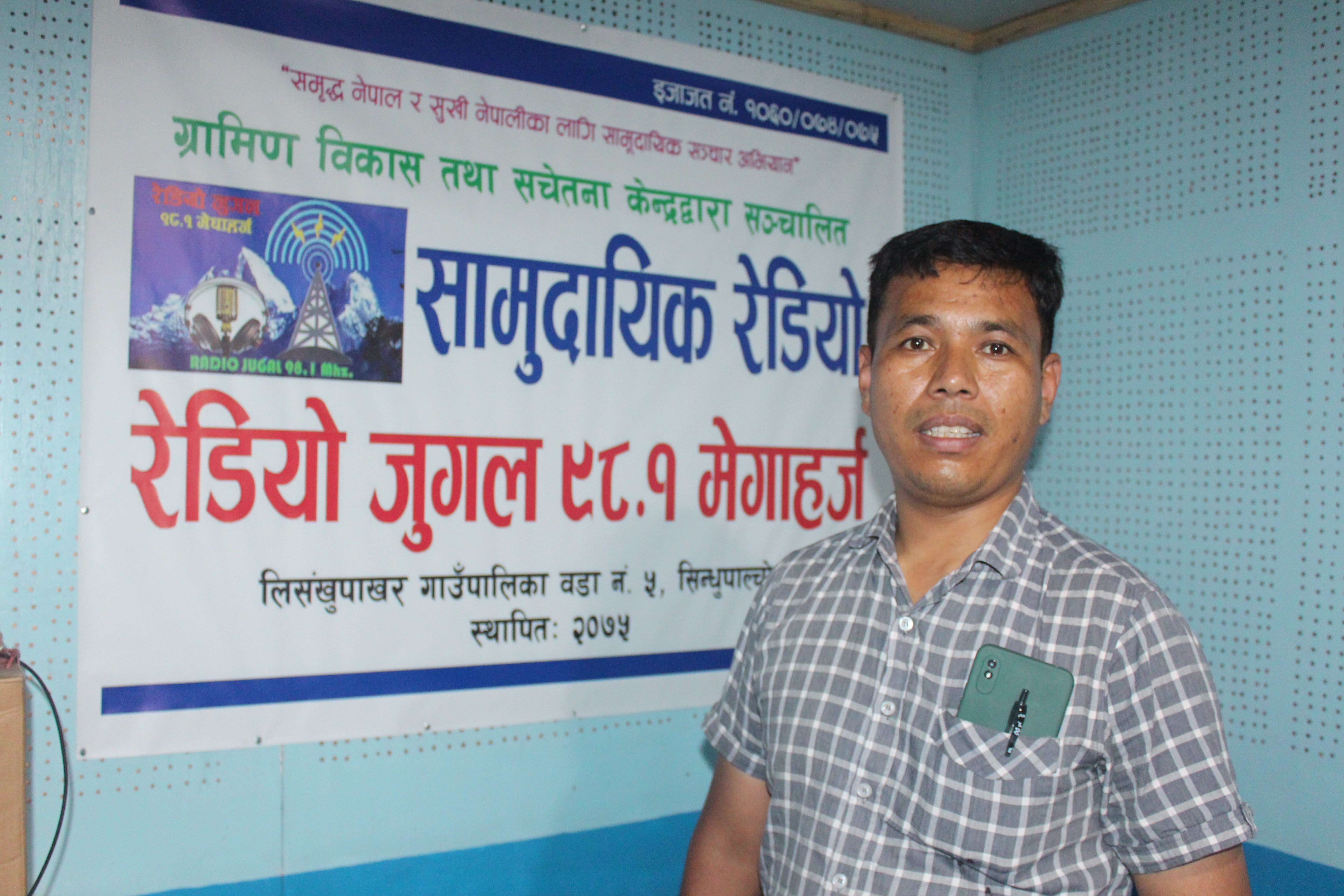 Radio Jugal was established on June 1, 2018, with a 500-watt capacity. It is managed by a group of Indigenous women led by Lama, who started her career at Radio Sindhu, the first and only community radio station situated in Chautara. Currently, there are eight FM stations operating in the district, but Radio Jugal is the only one run by Indigenous communities— mostly Tamang Indigenous women—and dedicated to reaching Indigenous communities in the district. According to Lama, there are currently five women producers and presenters working at the station.

Radio Jugal produces programs in Tamang, Newar, and Thami Indigenous languages. It broadcasts about 10 hours a day, from 5:30-10:00 am and from 4:00-9:30 pm with news bulletins and programs dedicated to Indigenous Peoples’ issues serving the voices of women, youth, and senior citizens. Indigenous Peoples’ rights advocacy is the first priority of the station. “We believe that only well informed people can enjoy their rights. Therefore, we aim to inform, entertain, and empower local Indigenous communities,” Lama says.