‘‘I fear for my future. I fear for my community.” These words were spoken by Ryan Schaefer, a 17-year-old from the Dene Nation in Canada during the first meeting of the Indigenous Peoples Caucus at COP 24. He shared the reality of diminishing traditional food and water sources and disturbing weather changes that are affecting his Peoples. "Indigenous youth of the world stand before you today to affirm that we share his fears for our future,” stated the International Indigenous Peoples Forum on Climate Change Opening Plenary Statement at COP 24, December 1, 2018, presented by Ruth Kaviok, National Inuit Youth Council of Canada.

It was close to midnight December 15, 2018, when the President’s gavel came down for a final time, concluding two weeks of intense debate at the 24th Conference of the Parties of the United Nations Framework Convention on Climate Change (UNFCCC COP 24) in Katowice Poland.

Indigenous Peoples from around the world, including Tribal Nations and organizations whose traditional lands are within the current political boundaries of United States participated. Except for a few Indigenous representatives that were credentialed by States, most were designated as “observers” in this UN process, which is led and controlled by the “State Parties,” the 195 countries that signed on to the Paris Agreement adopted in December 2015 at COP 21. Despite this power imbalance within the UNFCCC (and, by and large, the entire UN system), the over 100 Indigenous delegates representing all regions of the world stood united to insist on formal participation in this process that impacts us so directly and to ensure that our rights and traditional knowledge are respected in national and global efforts to combat climate change.

In Katowice the Indigenous Peoples Caucus at the UNFCCC, known as the International Indigenous Peoples Forum on Climate Change (IIPFCC), met in a weekend preparatory meeting, and met at least once a day during the COP to discuss strategies and reaffirm our collective positions in the face of new developments and State proposals.

Indigenous Peoples began the session by calling on States to meet their commitments to reduce emissions and reverse their fatal addiction to fossil fuel energy development which is the primary source of the greenhouse gas emissions that cause climate change. The IIFPCC opening statement referenced the recent UN study which reported that emissions increased in the last year with a projected 3 degree rise at the current rate, which will mean 2 to 3 times higher in the Arctic. The statement admonished the States for their lack of real action: “Having committed to the Paris Agreement but ignoring the actions it demands is a failure of all States.” 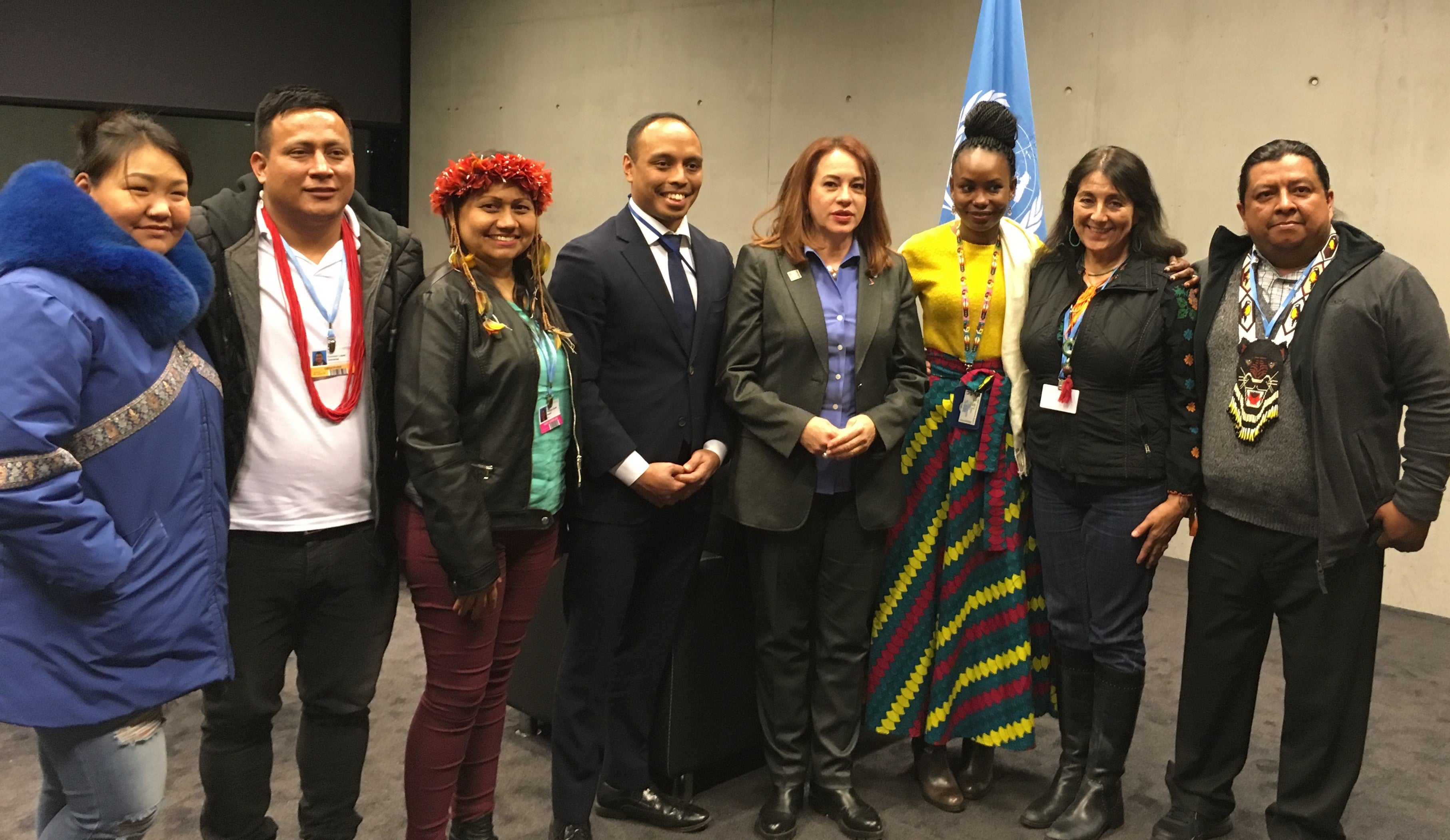 Throughout the negotiations, Indigenous Peoples, accompanied by key States allies, held firm on the core issues of rights protection and equal participation. The final resolution adopted unanimously by the COP 24 Plenary December 8th reflected this unwavering commitment, emphasizing, “in its entirety, the United Nations Declaration on the Rights of Indigenous Peoples in the context of the implementation of the functions of the Local Communities and Indigenous Peoples Platform involving Indigenous Peoples.” It also established the FWG with an equal number of Indigenous and State representatives, seven each. Additional places will be held open for the future participation of “Local Communities” when they are better defined and decide to become engaged.

After the adoption, many State representatives made statements recognizing the historic advance this decision represented. For example, Majid Shafiepour, Vice President of the COP and Co-facilitator of the COP’s SBSTA (Subsidiary Body for Scientific and Technological Advice) from Iran welcomed the adoption and recognized the hard work it took to reach an agreement between the State Parties and Indigenous Peoples.

“You have set an example of partnership through this process, working together in intense negotiations, overcoming many challenges and difficulties over the last three years to find common ground and successful conclusion at this COP,” Shafiepour said.

The FWG will begin its work in 2019. Priorities will include development of a work plan and structure for the Platform, adoption of rights safeguards to protect Traditional Knowledge and practices, and development of a budget to ensure support for the participation of Indigenous traditional knowledge holders and practitioners if they so choose.  At least one activity for the Platform itself is planned for 2019. Possible discussion themes proposed by Indigenous Peoples include Oceans, Land and Water, Food Sovereignty and Forests reflecting key eco- and knowledge systems impacted by Climate Change.

Strategy meetings and side discussions were held with Human Rights organizations, the Office of the High Commissioner on Human Rights, and States during the sessions to discuss how to pressure States to include strong human and Indigenous rights language. But the Rule Book was finally adopted by consensus with seven references using the terms “Indigenous” or “Indigenous Peoples” (including a footnote recognizing the adoption of the new Platform) but making no specific references to Human Rights or the Rights of Indigenous Peoples.

Disappointingly, several references to human rights in the President’s draft going into the COP were removed in the negotiations that took place among the States during the COP. The final adopted text called on States to develop and report on their “Voluntary National Contributions” to reduce climate change with the input of Indigenous Peoples “as appropriate,” far weaker than assurance of full and effective participation as called for by Indigenous Peoples.

Frank Ettawageshik from Little Traverse Bay Band of Odawa Indians in Michigan represented the National Congress of America Indians (NCAI) at COP 24. He expressed the mixed reactions of Indigenous Peoples regarding the outcomes.

“We are gratified that an important milestone was reached in the formation of the Local Communities and Indigenous Peoples Platform and we express our appreciation to Indigenous Peoples and States from all the regions who worked so hard for this achievement,” Ettawageshik said.

“It is especially important that Indigenous Peoples from each region, using their own procedures, will select their representative on the Facilitative Work Group which will draw up the work plan for the Platform. But we are extremely disappointed that the commitment in the Paris Agreement Preamble that in all climate actions, the rights of Indigenous Peoples and human rights generally are to be respected and promoted, got lost in the adoption of the Paris Rulebook in Katowice. The references to rights were consciously removed. This shows that we still have a lot of work to do at the UNPFCC to explain the importance of a rights-based approach for addressing climate change. We will continue to raise these issues at COP 25 in Chile, and beyond.”

Indigenous Peoples, especially those from the US, took note that the United States government delegation was highly engaged in the discussions and decision-making at COP 24, despite the US President’s declaration in 2017 that the US intends to withdraw from the Paris Agreement.

Although the US was supportive during the Platform negotiations, they were one of only four States that took the floor during the final Plenary of the first week to oppose acknowledging the dire warning of the Intergovernmental Panel on Climate Change (IPCC) “Global Warming of 1.5º C” report and its call for immediate, decisive action by States to reduce their Greenhouse gas emissions.

The IPCC was invited by the Paris decision to issue a report on the effects of a 1.5º Centigrade increase in global temperatures over pre-industrial levels. The IPCC released its report in October 2018 confirming the critical need to maintain the strongest commitment to the Paris Agreement’s aims of limiting global warming to well below 2ºC and pursuing efforts towards 1.5º C. The report detailed the devastating effects even a after the adoption increase would have on ecosystems, health, food security and the livelihoods of Indigenous Peoples around the world.

Most States agreed that the COP should adopt language “Welcoming” the report as a basis for global climate action.  However, the United States, Saudi Arabia, Russia, and Kuwait, during the final Plenary of the first week, stated their firm opposition to that language, preferring to merely “take note” of the report. The language finally agreed upon was “expresses its appreciation and gratitude” to the IPCC for providing the report. Many States took the floor to express their outrage at the US and the other States that refused to acknowledge the urgency of taking dramatic action to bring the rate of global warming under control. Indigenous Peoples also restated their firm support for a 1.5º C maximum goal in their closing statement to the Plenary.

In the Indigenous Peoples Caucus closing Plenary Statement, Michael Charles, a youth delegate from the Dine’ Nation in the US, began by introducing himself traditionally in the Dine’ language. “We are deeply disappointed to see the language of human rights missing from the outcome of the Rulebook text,” Charles said, addressing both the advances and shortfalls of COP 24.  “We believe that a rights-based approach is necessary to guide an implementation that protects us. This text is incomplete without human rights, and specifically Indigenous rights. We do appreciate the commitment of the parties, the SBSTA chair, and the UNFCCC Secretariat to the operationalization of the Local Communities and Indigenous Peoples Platform. We will now embark on a process to breathe life into the Platform using our resilience, knowledge, and rights with equal representation between states and Indigenous Peoples.”

--Andrea Carmen (Yaqui) began her work with the International Indian Treaty Council (IITC) as a student intern in the IITC’s San Francisco Office in 1976 and has been a staff member since 1983.  She became IITC’s Executive Director in 1992.  Since 2010, Andrea has been one of two members from the North America region on the Indigenous Peoples Global Steering Committee for the International Indigenous Peoples Forum on Climate Change which coordinates Indigenous Peoples’ work at the UNFCCC.   IITC was founded on the Standing Rock Reservation in South Dakota in 1974 to be an international voice and advocate for the Rights of Indigenous Peoples.  In 1977, IITC was the first Indigenous Peoples organization to receive Consultative Status from the UN Economic and Social Council and in 2011 it was the first to be upgraded to General Consultative Status.  Andrea attended COP 24 as a representative of IITC.  To find out more about this and other areas of IITC’s work, log onto www.iitc.org

With thanks to Kim Gottschalk (Native American Rights Fund) and Frank Ettawageshik (National Congress of American Indians) for their assistance in the development of this article, and to all the members of the Indigenous Peoples Caucus at COP 24 for their dedication, hard work and commitment to their Peoples, future generations and Mother Earth.

Photo 1:  Indigenous Peoples and States negotiators celebrate their agreement on the final text for the Local Communities and Indigenous Peoples Platform at UNFCCC COP 24 in Katowice Poland on December 7, 2018. Photo courtesy of Andrea Carmen.