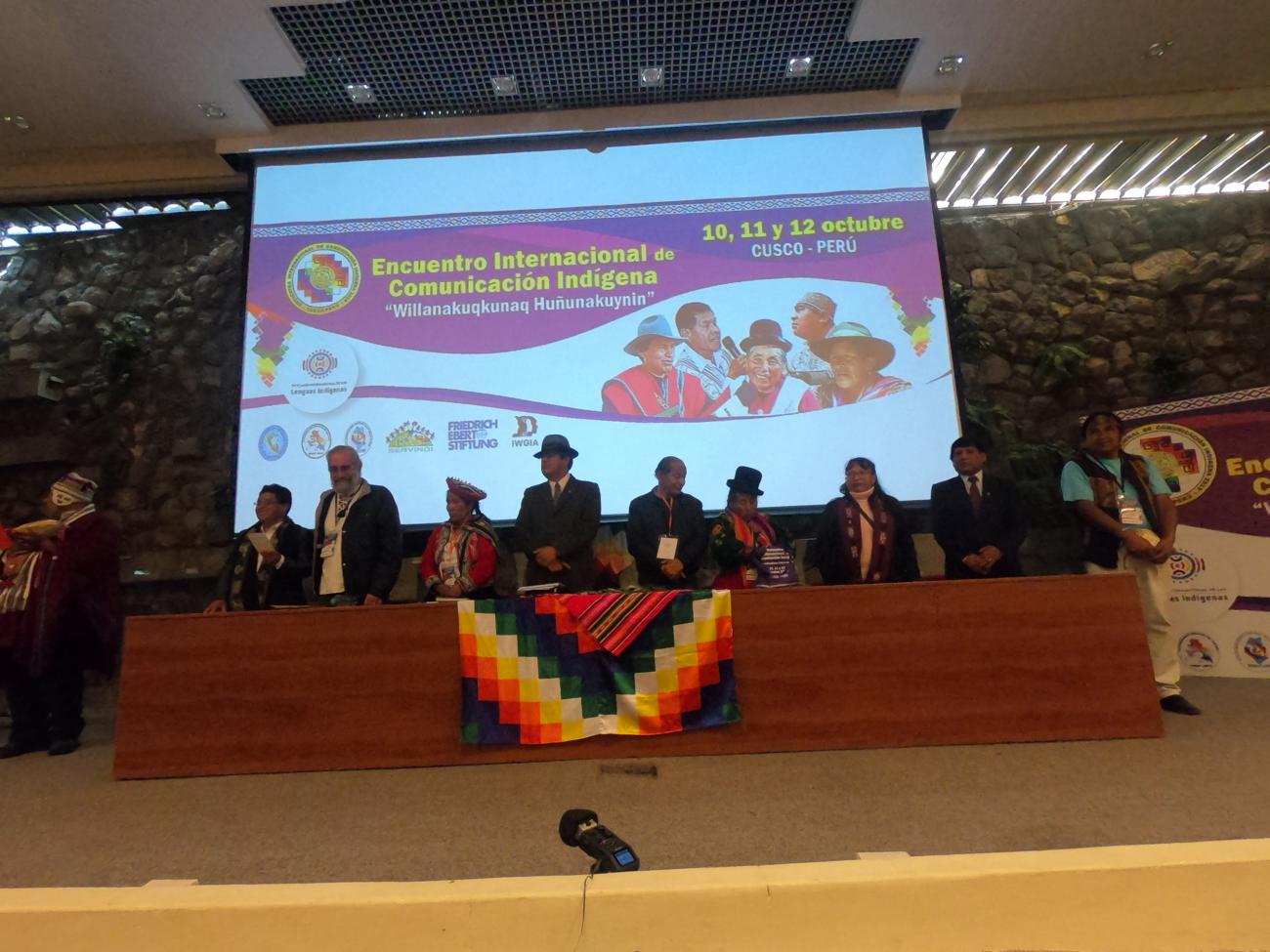 Communication is a human right and is a fundamental element for the exchange of knowledge and information, in the pursuit of sustainable development of the people of Abya Yala. Knowledge makes us free and ignorance makes us slaves by denying our freedom of expression and the free exchange of thought, promulgated in international law. These ideas were promoted during the International Summit of Indigenous Communication, which was held on October 10-12 in Cusco, Peru, within the framework of the UN International Year of Indigenous Languages.

At this international event I had the opportunity to represent Xyaab ’Tzuultaq’a Community Radio, which operates in the Maya Q’eqchi’ territory, in El Estor, Izabal, Guatemala. The government of Guatemala has declared a State of Siege, which is used to criminalize community radio through raids carried out by government authorities, restricting the constitutional rights of the population, mainly the right to freedom of expression. Before the plenary of the event, support was requested for advocacy at the international level, with the purpose of changing Guatemala’s discriminatory laws, mainly the Telecommunications Law, with the approval of Community Media Law Initiative 4087, a proposal that is currently stalled in the Congress of Guatemala.

During the Summit, innovative workshops, panels, forums, conversations, exhibitions, video presentations and documentary films were developed, among other parallel events, which valued the importance of mother tongues as the main vehicle of transmission of traditional knowledge and cultures, which have been maintained and passed on from generation to generation despite the negative impacts of the Spanish language, which is the official language in most countries of Abya Yala.

On a personal level, all the activities carried out allowed me to access resources, tools, instruments and materials that will help me strengthen my knowledge about alternative media, as well as to contribute to the revitalization processes of my ancestral language and culture at Radio Xyaab 'Tzuultaq'a. I was able to learn from the examples of community radio stations that are promoting the human rights of Indigenous Peoples at the continental level. It is important to recognize that the cultural and linguistic diversity of the people of Abya Yala constitute a major asset for the development of alternative media, to help raise awareness about the struggles, problems, needs and priorities of Indigenous communities, who constantly suffer from discrimination, racism, exclusion and violation of their most basic human rights.

The Summit provided a space for the exchange of experiences among the participants. We honored the memory of our ancestors who have always guided us and had the opportunity to improve our work in media by learning about new technologies and techniques. As a result of our participation in the event, together with several entities, we presented a proposal to organize the next International Summit of Indigenous Communication in Guatemala for the year 2022.

Participants shared ideas on how to guide the work of the media at the service of our Peoples, emphasizing the need to make our struggles and the threats to Indigenous territories more visible. José Ignacio López Vigil from Cuba pointed out that “human rights are not begged for, they are exercised.” He also called for the need to "decolonize the ‘word’ and recover the severed languages ​​of our ancestors," referring to the atrocities committed by Spanish conquerors, who destroyed the languages ​​of Indigenous Peoples of Abya Yala.

Lucio Ramos from Peru explained that "human beings are part of nature and that we have life thanks to Mother Earth, then, if we destroy nature, we destroy ourselves." Another aspect that stood out was the importance of “wearing clothes of natural origin like alpaca, because it collects the energies of the cosmos during a ritual; on the other hand, synthetic clothing rejects these energies.”

Dora Estela Muñoz from Colombia said that Indigenous communication is one of the main strategies for the defense of life and land, noting that "we cannot communicate from a desk, from a computer," and emphasizing that "without territory there is no communication."

Dani Vargas from Peru referred to the importance of “recognizing the power of knowledge and strategic communication for the sustainability of ecosystems in ancestral territories.” She also warned about the need to "know the influence of the 12 economies that govern the world, because they decide about all of us, what we eat, what we consume."

Ligia Alencaste from Peru gave a presentation on an ethnographic study on ancestral knowledge and climate predictors, in which different sectors of the population, including children, participated. She explained that "the climatic signs have been used since ancient times, such as the sound of the wind, the songs of the birds, the path of the clouds, the position of the sun and the influence of the moon." One aspect that stood out is "the right to register ancestral knowledge, according to Convention 169, which is a tool that we must use in our favor to maintain the wisdom of our ancestors."

Martin Vidal from Colombia spoke about the use of maps as communication tools, "which, in addition to explaining geographical references, also confuse Indigenous communities." He stressed that "maps impose borders on us, because there is no line that divides the river or the mountain." He recommended Indigenous communities "promote the use of the Galileo satellite positioning system from the European Union, in addition to avoiding the use of the GPS system from the United States imposed by the market."

Martín López from Peru referred to “the difficulties in communicating in contexts of social conflict, mainly in Peru, where the media are influenced by mining companies.” He explained that "the Peruvian State has militarized and criminalized Indigenous communities that are reluctant to accept mining projects."

Elsa Merma from Peru, explained her situation as a media producer in Cusco, “I have suffered discrimination and racism in the media, and have been criminalized for informing about the reality of marginalized Peoples. I have been denounced and imprisoned for the defense of Pachamama."

José Bayardo Chata from Peru spoke about the role of communication in struggles against corporate power, explaining that “in Aymara communities there is resistance to mining projects, but the media, controlled by corporations, does not inform about the struggles of communities.” He also referred to the experiences of other countries, where there are processes of resistance struggles,like the Central American Alliance Against Mining, which has worked hard to make the problems of the population in resistance to mining visible.

--Victor Maquin (Maya Q’eqchi ’) is a radio journalist from Guatemala. Thanks to the generous support of WACC and Cultural Survival, four Indigenous community radio delegates attended this summit.