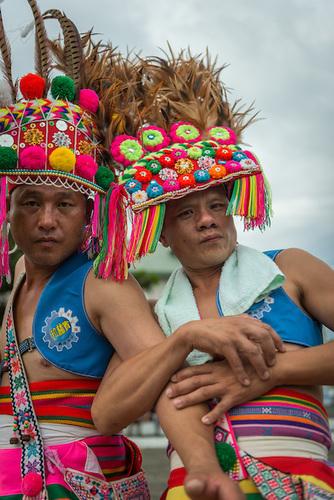 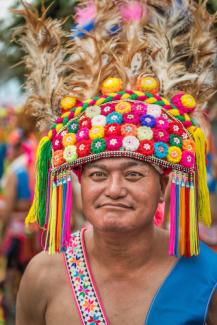 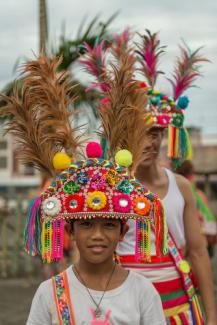 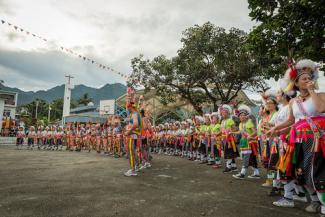 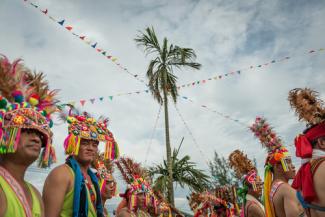 According to many visitors to Taiwan, the magnificent East coast stretching from Hualien to Taitung County is arguably the most beautiful area of Taiwan. It is often compared to the scenic coastlines in Hawai’i, California or New Zealand. The scenery of Taroko Gorge, as well as the towering cliffsides met abruptly by the deep blue Pacific Ocean leave their indelible impressions on visitors. However, the distinctive cultures of the locals are what gives visitors a rich, colorful experience they will always remember.

Imagine the rhythmic waves rolling onto a golden beach, while the green coconut palm trees sway in the gentle breeze. Seagulls glide overhead, searching for mobile meals on the sand. Hermit crabs scuttle past your feet, looking for shelter, and avoiding seagulls, as they are startled by an incredible man-made noise.

This idyllic scene is interrupted by drum beats and a powerful chorus of villagers. Men, women and children of all ages participate, gathering hand-in-hand in large circles. Thousands wearing beautiful tribal costumes dance and sing in the native language of the Amis tribe. Under the hot, July sun, they give thanks to the plentiful harvest of millet. They also bless the abundant catch of the local fishermen. Families offer some of the fattest pigs, to sacrifice for the days of feasting.

The locals enjoy continuous celebration, and it’s celebration with purpose. The village leaders organize festival activities that promote respect, gratitude and unity. This is an opportunity for the children of the village to put away their iPads and smart phones to focus on messages from their elders and their parents. It is a time to immerse themselves in their Indigenous culture experiences, and to express their own modern flavor during their performances. Younger generations learn many of the traditional songs and dances from their elders, and they create their own style of performances based on what they learn from the elders and from their modern pop influences. The result is an energetic mixture of new and old culture that delight the locals and the tourists.

Visitors are allowed to join in these special activities, so this is the best time for tourists to visit the area, if they enjoy hand-on experiences. Outsiders can become emotional as they hold hands with villagers, share millet wine, and experience the rituals, learning about their meanings.

What is the significance of the Amis Harvest Festival? First, visitors can experience authentic Indigenous culture in Taiwan, participating in ceremonies that have been performed for hundreds of years. According to the Council of Indigenous Peoples, the largest aboriginal tribe in Taiwan is the Amis tribe, with over 190,000 members. People of this tribe refer to themselves as, “Pangcah,” in their own language. These tall, graceful people closely resemble the Polynesians of the Pacific islands. They have a traditional culture centered around fishing and the harvesting of millet.

Forty communities hosting the Amis Harvest Festival every year. Traveling from Hualien, in the middle of Taiwan’s East Coast, down to Taitung, in Taiwan’s Southeast corner, one can find Amis Harvest Festivals scheduled in conjunction with when millet is harvested in their area. The celebrations, which can last from three to seven days, typically begin in the middle of July and conclude at the end of August.

Millet is a grain that flourishes in Taiwan, which is similar to rice. It has been a staple crop for all Indigenous groups in Taiwan. Most of Taiwan’s tribes have festivals related to the harvest of millet. The versatile grain is used to make flour, or eaten steamed. It is also brewed into millet wine, which is often used in social rituals.

Without the Harvest Festival, many of the Amis communities would not have the opportunity to pass down many of the important customs to the younger generations. The Amis rely on the event as one of the few times during the year when their entire community can reunite and strengthen their familial bonds. It is a time for the spirits of the ancestors to be honored and old traditions to renewed. Without the Amis Festival, Taiwan would lose a colorful portion of its multi-cultural heritage.

In addition, the festival season bring in tourists, which contribute to the local economies of the villages. Visitors who wish to experience the festival should be sensitive not to disturb the culturally-significant activities. After all, this is an important time for family reunion among Amis people. Some Amis festivals do not allow visitors, unless they are brought in as guests of a local person. Some festivals or some activities forbid females from attending. Rules vary from village to village. But, if one is lucky enough to be invited, one should bring a gift, such as food or beer.

The East Coast Scenic Area Tourism Bureau publishes the Harvest Festival dates for each community 30 days before the events on their Web site: www.eastcoast-nsa.gov.tw

--Tony Coolidge is a Taiwanese-American journalist and entrepreneur who has returned to Taiwan to learn more about Idigenous Peoples on the island. His mother was from the Atayal tribe, and he returned to Taiwan to discover his roots after his mother died. He currently develop programs and projects that reconnects Austronesian tribal peoples with their ancient ancestral home in Taiwan.