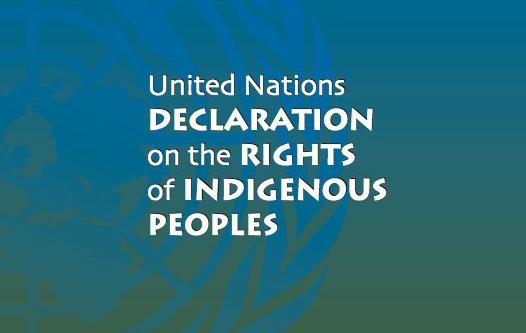 The Declaration is the outcome of 25 years of hard negotiations. The rights spelled out in the document "constitute the minimum standards for the survival, dignity and well-being of the Indigenous Peoples of the world."  The Declaration protects collective rights and individual rights of Indigenous Peoples in relation to self-government, land, education, employment, health and other areas.

The Declaration also requires countries to consult with Indigenous Peoples with the goal of obtaining their consent on matters which concern them. As explained by former UN Special Rapporteur on the Rights of Indigenous Peoples, James Anaya, the right of self-determination is "to be full and equal participants in the creation of the institutions of government under which they live and, further, to live within a governing institutional order in which they are perpetually in control of their own destinies."

While several countries have made steps towards aligning their policies with the standards enshrined in the Declaration, however, an implementation gap remains. 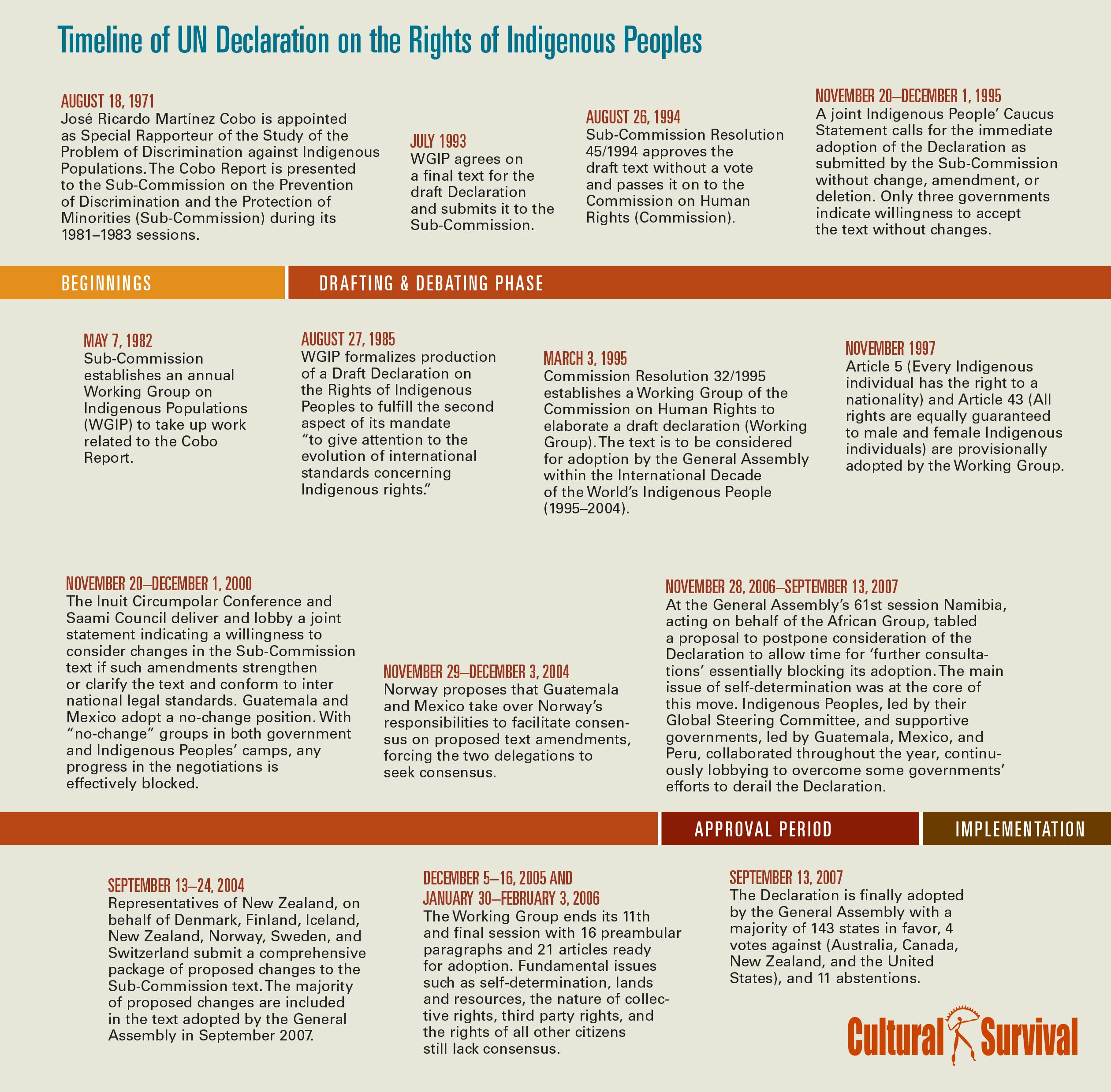 August 18, 1971
José Ricardo Martínez Cobo is appointed as Special Rapporteur of the Study of the Problem of Discrimination against Indigenous Populations. The Cobo Report is presented to the Sub-Commission on the Prevention
of Discrimination and the Protection of Minorities (Sub-Commission) during its 1981–1983 sessions.

May 7, 1982
Sub-Commission establishes an annual Working Group on Indigenous Populations (WGIP) to take up work
related to the Cobo Report.

August 27, 1985
WGIP formalizes production of a Draft Declaration on the Rights of Indigenous Peoples to fulfill the second
aspect of its mandate “to give attention to the evolution of international standards concerning Indigenous rights.”

July 1993
WGIP agrees on a final text for the draft Declaration and submits it to the Sub-Commission.

August 26, 1994
Sub-Commission Resolution 45/1994 approves the draft text without a vote and passes it on to the
Commission on Human Rights (Commission).

March 3, 1995
Commission Resolution 32/1995 establishes a Working Group of the Commission on Human Rights to
elaborate a draft declaration (Working Group). The text is to be considered for adoption by the General Assembly within the International Decade of the World’s Indigenous People (1995–2004).

November 20–December 1, 1995
A joint Indigenous Peoples Caucus Statement calls for the immediate adoption of the Declaration as submitted by the Sub-Commission without change, amendment, or deletion. Only three governments indicate willingness to accept the text without changes.

November 20–December 1, 2000
The Inuit Circumpolar Conference and Saami Council deliver and lobby a joint statement indicating a willingness to consider changes in the Sub-Commission text if such amendments strengthen
or clarify the text and conform to international legal standards. Guatemala and Mexico adopt a no-change position. With “no-change” groups in both government and Indigenous Peoples’ camps, any progress in the negotiations is effectively blocked.


December 5–16, 2005 and January 30–February 3, 2006
The Working Group ends its 11th and final session with 16 preambular paragraphs and 21 articles ready
for adoption. Fundamental issues such as self-determination, lands and resources, the nature of collective rights, third party rights, and the rights of all other citizens still lack consensus.


November 28, 2006–September 13, 2007
At the General Assembly’s 61st session Namibia, acting on behalf of the African Group, tabled a proposal to postpone consideration of the Declaration to allow time for ‘further consultations’ essentially blocking its adoption. The main issue of self-determination was at the core of this move. Indigenous Peoples, led by their Global Steering Committee, and supportive governments, led by Guatemala, Mexico, and Peru, collaborated throughout the year, continuously lobbying to overcome some governments’ efforts to derail the Declaration.


September 13, 2007
The Declaration is finally adopted by the General Assembly with a majority of 143 states in favor, 4
votes against (Australia, Canada, New Zealand, and the United States), and 11 abstentions.

October 18, 2007:  Aurelio Cal v. Attorney General of Belize
The Supreme Court of Belize ruled that the national government must recognize Indigenous Mayans' customary tenure to land and refrain from any act that might prejudice their use or enjoyment of this land, referencing the Declaration. The Supreme Court of Belize held that the government of Belize is obligated, under the constitutional rights to property, non-discrimination, life, liberty, security of the person, and protection of the law, to respect and protect Maya land rights in the Toledo District of southern Belize.10 In its decision, the Supreme Court of Belize became the first national high court to cite the United Nations Declaration on the Rights of Indigenous Peoples (“UNDRIP”). The court acknowledged that the UNDRIP was a nonbinding instrument, but that “where these resolutions or Declarations contain principles of general international law . . . states are not expected to disregard them.”

November 28, 2007: Saramaka People v. Suriname
A judgment of the Inter-American Court of Human Rights found the State of Suriname committed violations of the American Convention against the members of the Saramaka Peoples, a Tribal community living in the Upper Suriname River region, by failing to adopt effective measures to recognize the Saramaka people's right to the use and enjoyment of the territory they traditionally occupy. The judgement references Article 32 of the Declaration.

April 3, 2009
Following a change of government, Australia shifted its position in support of the Declaration.

February, 2, 2010: Endorois Community v. The Republic of Kenya
In a landmark decision adopted by the African Union the African Commission declared the expulsion of Endorois from their ancestral lands illegal. The African Commission found that the Kenyan government had failed to recognize and protect Endorois’ ancestral land rights and failed to provide sufficient compensation or alternative grazing land following their eviction, or to grant restitution of their land, and similarly failed to include the community within the relevant development processes.The Endorois also argued that the Declaration gives Indigenous Peoples the right “to maintain, protect and have access in privacy to their religious and cultural sites ....” (UNDRIP Art. 12)

April 20, 2010
Minister of Māori Affairs, the Hon Dr Pita Sharples, appeared before the United Nations Permanent Forum on Indigenous Issues and announced New Zealand’s support for the Declaration on the Rights of Indigenous Peoples.

November 12, 2010
Canada endorses the Declaration reversing its initial opposition to the document.

December  15, 2010
At the White House Tribal Nations Conference, U.S. President Barack Obama announced that the United States would "lend its support" to the UN Declaration on the Rights of Indigenous Peoples. "The aspirations it affirms," he said, "including the respect for the institutions and rich cultures of Native Peoples, are one we must always seek to fulfill. . . I want to be clear: what matters far more than words, what matters far more than any resolution or declaration, are actions to match those words.  And that’s what this conference is about. . . That’s the standard I expect my administration to be held to."

June 27, 2012: Sarayaku v. Ecuador
The Inter-American Court of Human Rights ruled in favor of the Sarayaku Peoples, affirming and upholding the right of free, prior and informed consent (FPIC) of Indigenous Peoples along with the standards for its application.

May 26, 2017: Ogiek v. Kenya
Following the adoption of the Declaration, one of the major milestones of Indigenous Peoples’ rights in Africa was the African Commission's decision upholding the land-related rights of the Ogiek people and finding violations of each of the rights claimed except for the right to life. The specific Declaration articles this case relied on were 8, 23, 26.

2017: Te Awa Tupua (Whanganui River Claims Settlement) Act
Te Awa Tupua Act became the first piece of legislation in the world to declare a river a legal person. Through this grant of legal personality the Whanganui River acquires the rights, duties, powers and liabilities of an entity with legal standing including the ability to sue those who harm it. This legislation is aimed at reconciling the relationship between the government of Aotearoa/New Zealand and  the Māori Peoples in light of the principles of the Treaty of Waitangi. While this Act does not include language or direct reference to the Declaration it embodies many of the underlying principles of the Declaration.
This demonstrates that UNDRIP has influenced Indigenous Peoples legal arguments.

November 28, 2019
British Columbia became the first jurisdiction in Canada to incorporate the United Nations Declaration on the Rights of Indigenous Peoples, making the Declaration part of B.C. law. 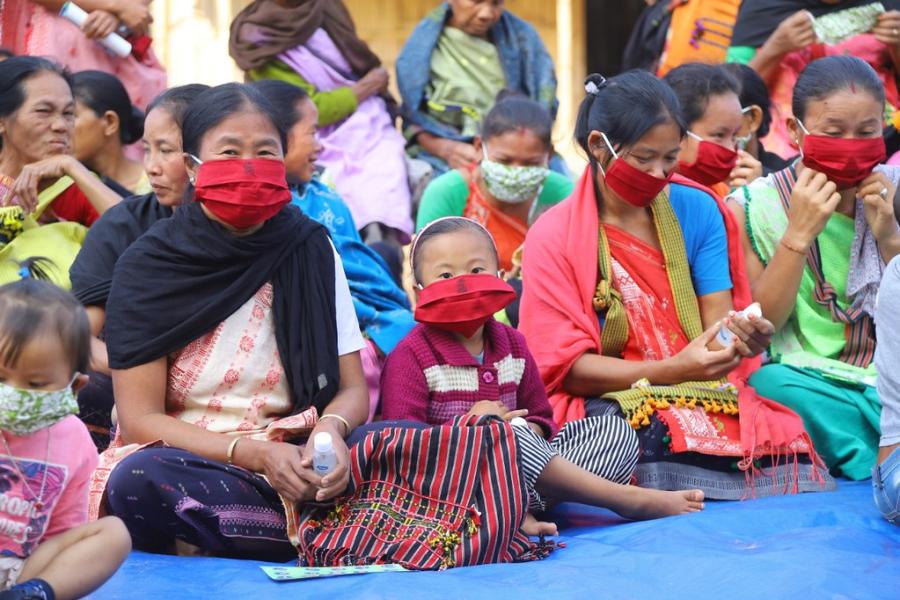 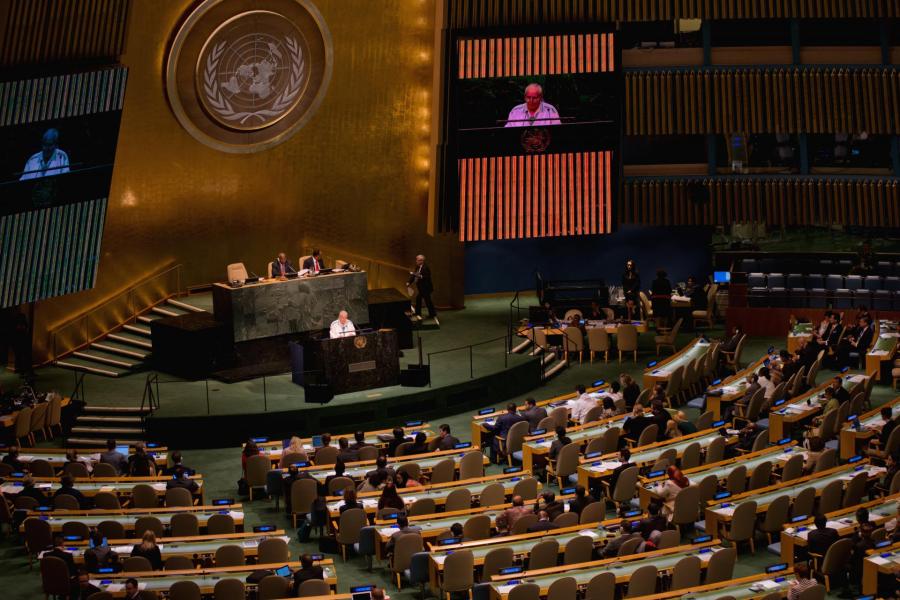 The UN Declaration on the Rights of Indigenous Peoples Turns 15 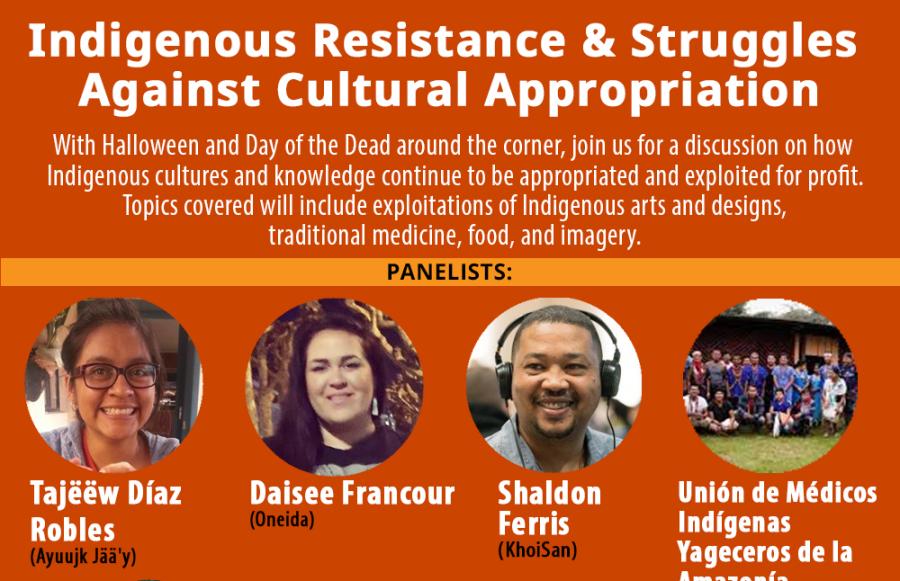