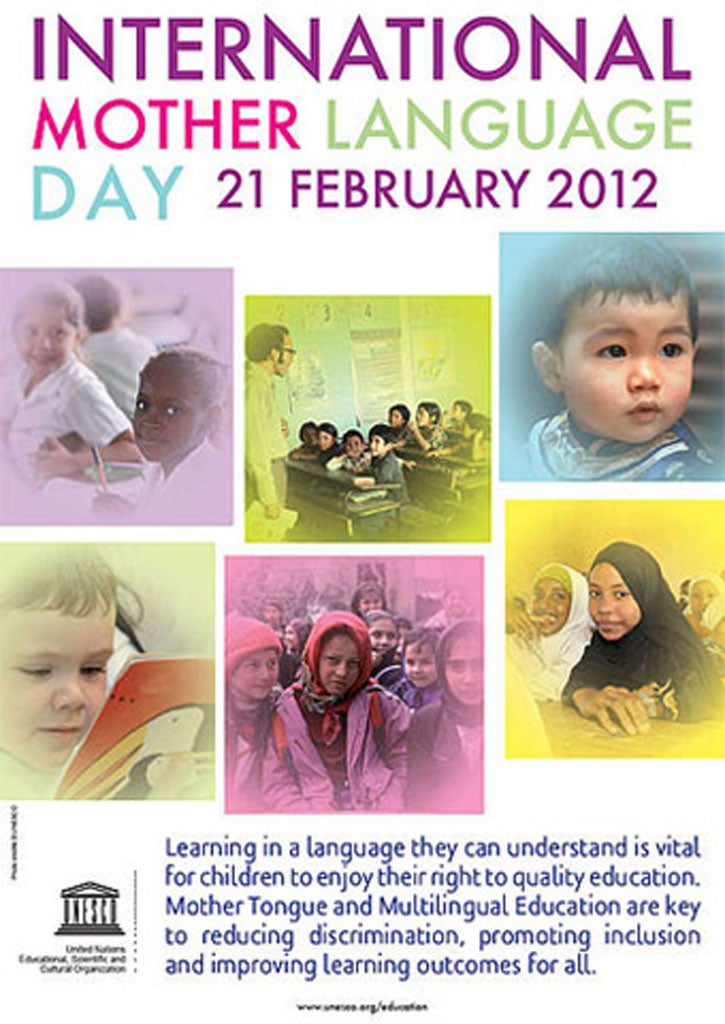 In 2012, in keeping with the United Nations Declaration on the Rights of Indigenous Peoples, UNESCO is highlighting mother tongues as part of the right to education and encourages its member states to promote instruction and education in the mother tongue.

5 Things You Can Do to Observe Mother Language Day:

1.        Send an audio postcard in five Native American languages at www.OurMotherTongues.org to introduce others to America’s first languages via email or Facebook.   Speakers and learners at the Alutiiq, Crow, Eastern Cherokee, Lakota, Navajo (Diné)and Yuchi (Euchee) language programs offer beautiful images of cultural events and practices dependent on future generations speaking today’s endangered tribal languages.  Show your support, thank your speaker mentor, or just help spread the word about Native language endangerment in the Americas by sending friends and family audio messages like  “Together We Can Do Great Things!” in Euchee; “Be Happy Every Day” in Lakota; “Hello… All is Harmony ‘round Us” in Navajo; “Have a Good Heart” in Cherokee, “How are Things?” in Crow, and “I’m Thinking of You All” in Alutiiq.

2.       Help language advocates in Wisconsin reach their goal of 20,000 signatures!  Sign the petition in support of a 7th grade student from the Menominee Nation in Wisconsin who was punished by teachers and coaches at her parochial school for “attitude problems” after teaching a fellow Menominee students how to say “hello “ and “I love you” in the Menominee language, an endangered tongue spoken in North America for thousands of years. The local diocese is bringing in Native American trainers to conduct cultural sensitivity training, but local language advocates say it’s not enough—that in a school where 60 percent of the students are from the nearby Menonminee Indian Reservation, the local Indigenous language should be offered so teachers and students alike will know common terms, greetings, and other phrases in this important mother tongue.

3.       Watch scenes from WE STILL LIVE HERE (Âs Nutayuneân), celebrate the power of dreams, “leaving children possibilities,” and meet the nearly twenty year-old Wopanaak Language Reclamation Project, which is “bringing language home” to the Wampanoag Nation of southeastern Massachusetts after many generations passed without fluent speakers.  The ancestors of today’s Wampanoag welcomed the Pilgrims to “New England” in 1620, and soon established a robust tradition of writing and reading in the Wampanoag language in concert with English missionaries like John Eliot who collaborated with multiple tribal communities to publish the first New Testament the printed in the western hemisphere in 1663, followed by full and revised editions of the Wampanoag language version of the King James Bible in 1680 and 1685.  Order copies of the film for personal, institutional, or activist use at Makepeace Productions, with a portion of the proceeds benefiting WLRP.

5.       Connect the dots. Value all languages and participate in language learning.  “I think people are passionate about language because it’s about sovereignty and nationhood,” says Ojibwe scholar and historian, Jean O’Brien, author of Dispossession by Degrees: Indian Land and Identity in Natick, Massachusetts, 1650-1790.  “A language is not just words,” says scholar Noam Chomsky, professor of linguistics at the Massachusetts Institute of Technology in Cambridge.  “It’s a culture, a tradition, a unification of community all rolled into one.”  Visit Cultural Survival’s and Makepeace Productions’ companion website to WE STILL LIVE HERE (Âs Nutayuneân), OurMotherTongues.org, to hear more from Drs. Chomsky and O’Brien, and to hear community leader Earl Mills, Sr., in Why Learn Your Mother Tongue?  video clips. Also look for additional Found in Translation video clips about the precision of the Navajo language in describing positions of the moon, and meet a young family intent on restoring the chain of language transmission, connecting a grandmother and grandson through the educational opportunities available at the Tséhootsooí Diné Bi'ólta' Immersion School in Fort Defiance, Arizona.