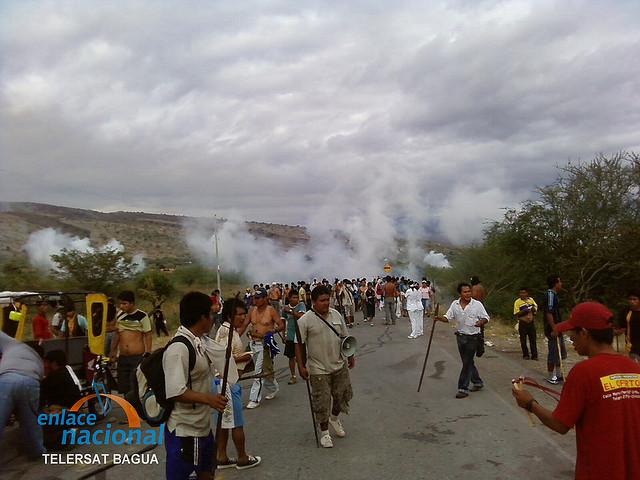 Indigenous protesters are under threat by the Peruvian government after a law was passed that effectively gives the police the “license to kill” according to the Lima-based Instituto Libertad y Democracia.  The law grants: “members of the armed forces and the national police exemption from criminal responsibility if they cause injury or death, including through the use of guns or other weapons, while on duty. Human rights groups, both nationally and internationally, the Human Rights Ombudsman (Defensoria del Pueblo) as well as the UN High Commissioner for Human Rights all expressed deep concern about the law.”

The law, number 30151, modifies previous legislation to allow for police officers or soldiers to injure or kill civilians without being bound by “regulations” as long as they are in the excesize of their duties.  “We continue considering this law as one that grants the armed forces as well as the national police a licence to kill,” Juan José Quispe of the ILD told The Guardian. “It permits a high degree of impunity. During the repression of social protests, police officers and soldiers who cause injuries or deaths will now be exempt from criminal responsibility…It’s a dangerous law and constitutes a threat to everyone,” he says. “It permits the use of weapons by contravening existing law and international parameters such as the United Nations’ Principles. It gives soldiers and police officers a carte blanche to commit crimes with impunity.”

The controversial law was highlighted in a report published this month by Front Line Defenders, titled “Environmental Rights Defenders at Risk in Peru.”

The perspective of the largely Indigenous environmental protestors is provided in an accompanying  video. In various interviews with grassroots leaders who have been targeted by police, they explain their peaceful demands of the state regarding responsible resource extraction, whether it is mining, dams, or petroleum.

Luciano Ataucuri, President of the Committee for the Defense of Natural Resources in  llusco, Chumbivilcas, explained, “If the Peruvian state wants to promote [resource extraction] that is responsible, great, we have welcomed that. But what we ask is that there is responsibility in two aspects. First, environmental responsibility, which must look at the impact of contamination, and the participation of local people in environmental monitoring. And the other aspect is social responsibility.  They say that mining brings development, but development for whom?”

Jamie Borda Pari, Human Rights without Borders, Cuzco was also interviewed. “In Peru the discourse the government uses is that, there are those who are in favor of development, and there are those who are against development, and they radical, anti-mining people.  Framed that way, there is not even a possibility for an open debate on how mining should be developed in Peru, beyond the model that has been imposed up to now.”

Over 50 people are currently on trial for a fatal massacre that occurred in the Peruvian Amazon five years ago. Almost all of the people on trial were Indigenous people present at the protests that turned into a bloodbath leaving 200 injured and 32 dead.

On June 5, 2009, Peruvian security forces attacked several thousand indigenous Awajun and Wambis protestors, including many women and children, who were blocking the “Devil’s Curve,” a jungle highway near Bagua, 600 miles north of Lima. The protestors were demanding revocation of decrees providing new access to exploit their Amazonian lands for oil, gas and logging that had been enacted to conform Peruvian law to Free-Trade agreements with the United States.

“So far only protesters have been brought to trial,” said Amnesty International in a statement.  Human rights lawyers have said there is no serious evidence linking the accused to the crimes they are being prosecuted for, which include homicide and rebellion. “Little progress has been made to determine the responsibility of the security forces. Likewise, no progress has been made to investigate the political authorities who gave the orders to launch the police operation.”

A wikileaks cable recently revealed U.S. role in the massacre.  U.S. officials argued that the Peruvian government was being too lenient by allowing the indigenous roadblocks to continue. “The government’s reluctance to use force to clear roads and blockades is contributing to the impression that the communities have broader support than they actually do,” the cable read. This mirrored public comment by Peruvian government officials who argued that acceding to indigenous demands to annul controversial new laws would doom the entire FTA.

This law will affect the safety of Indigneous protestrs across Peru, including Cultural Survival's partners at FEDIQUEP, the Federation of the Indigneous Quechua People of the Upper Pastaza River, who are activly protesting for the Peruvian government to clean up oil contamination after 40 years of extraction by Pluspetrol, an Argentian company.  The government wants to extend the company's current concession which expires this year, but the communities of the Amazon basin have said they will not participate in any discussion of extention while their lands continue to be poisoned by oil pollution from the previous years.

Read more and take action in solidarity with Indigenous protestors in the Peruvian Amazon here: Peru: Force Oil Company to Clean Up Spills