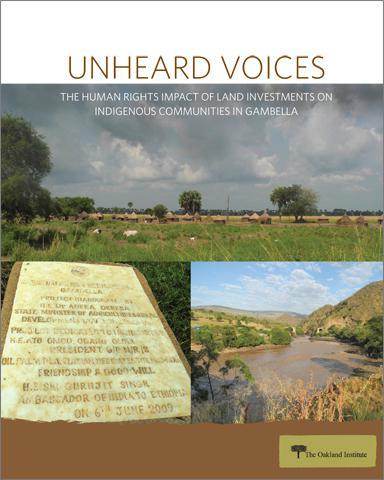 Re-posted from Oakland Institute
The Ethiopian government has committed egregious human rights abuses to make way for agricultural land investments, in direct violation of international law, said the Oakland Institute in a new briefing paper released in New Delhi today. The briefing paper, entitled "Unheard Voices: The Human Rights Impact of Land Investments on Indigenous Communities in Gambella,” calls on Ethiopia to put an end to the illegal forced evictions of indigenous peoples in areas targeted for land investment.
“Unheard Voices,” which builds on the Oakland Institute’s extensive in-country research on land investments in Ethiopia, also features testimony of two indigenous human rights defenders who have traveled to New Delhi to call on Indian investors to ensure that their investments respect human rights. Indian investors make up the majority of private investors in Ethiopian agricultural land.
Obang Metho of the Solidarity Movement for a New Ethiopia and Nyikaw Ochalla of the Anywaa Survival Organization testified to the human rights abuses against Anuak community members in the Gambella region of Ethiopia, one of several regions targeted for land investment.
“When the Ethiopian government met with [the investors], the local people were never consulted and were never compensated. The decision was made without involving the people,” said Obang Metho. “For the indigenous people, [their land,] their one identity and existence as a people for their survival has been taken away by the very government that is supposed to protect them.”
Since 2010, the Ethiopian government has displaced hundreds of thousands of indigenous communities from their ancestral lands and has made these lands available to investors. This relocation process, which the Ethiopian government calls “villagization,” has destroyed livelihoods, rendering small-scale farmers and pastoralist communities dependent on food aid and fearful for their own survival. Ethiopian officials have also beaten, arrested, and intimidated individuals who have refused to comply with relocation policies. These actions are in direct contravention of Ethiopia’s obligations under international human rights law. The Ethiopian government has systematically failed to answer for these abuses, and continues to tout the infrastructure and service-related benefits of villagization—benefits that, by and large, have failed to materialize.
“The [Ethiopian] government is depriving the Anuak people of their memories, homeland, and traditional farming system. And the Anuak are leaving behind homes [they have lived in] for generations,” said Nyikaw Ochalla. “The Anuak are now mov[ed] to a land that cannot be inhabited, with no water, and no access to education. This has created so much impact on their livelihoods.”
“The rights of indigenous communities are not expendable; they are enshrined in international law,” said Anuradha Mittal, Executive Director of the Oakland Institute. “Foreign investors can no longer hide behind the policies of the Ethiopian government, especially when these policies violate fundamental human rights.”
The Oakland Institute called on the Ethiopian government to ensure that its agricultural investment policies are carried out in accordance with international human rights law. Specifically, it called on the government to:

The Oakland Institute also called on foreign investors to:

“Unheard Voices” was released ahead of an unprecedented gathering of Indian civil society groups  who are coming together to share information on their own land-related struggles and address the prominent role of Indian investors inagricultural land investments in Ethiopia.
Read the full statements by Obang Metho  and Nyikaw Ochalla
Country
Ethiopia
Issues
Lands, Resources, and Environments