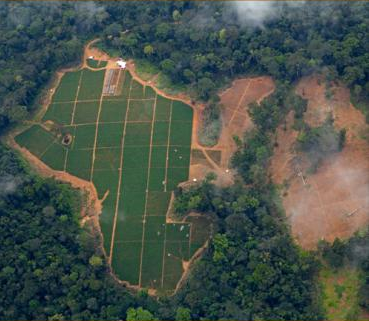 Herakles Farms, a US company, has been chopping down miles of dense forest without the full authority to do so -- and in the face of desperate pleas and resistance from local communities.

The palm oil project will also destroy precious chimpanzee and forest elephant habitat if it goes ahead.

In February, Herakles began clear-cutting trees with an illegal permit in hand. The permit also allows the illicit timber to be sold on international markets. And this is all happening with the complicity of the Cameroonian Ministry of Forests and the full knowledge of the European Union (EU).

We must act fast. The illegal timber is now in port, leaving for markets in China any day now -- our window to stop the trade is closing.

Act Now.
Tell Cameroonian authorities to seize the timber before it leaves the country.

We ask that you send the following email via Greenpeace International.

To : His Excellency the Cameroon Minister of Forest and Wildlife, Her Excellency, the Ambassador of the European Union in Cameroon.

A US company, Herakles Farms is engaged in the development of a controversial 20,000 ha oil palm plantation in the South-West Region of Cameroon that faces strong opposition from affected communities.

The company has been accused of bribing officials to advance their project, taken land without the consent of local communities, been suspended by the Cameroonian Ministry of Forestry for illegal forest clearing, and attacked local activists that are defending community rights.

This permit is now being used by Herakles Farms to “launder” its illegal wood onto the international market. All this happening with the complicity of the Cameroonian Ministry of Forests and the full knowledge of the European Union (EU).

Cameroon signed a Voluntary Partnership Agreement with the EU for its timber sector in October 2010, which entered into force on December 1, 2011. It is a legally binding trade agreement to halt illegal logging. Through this agreement Cameroon commits to ensuring that all its timber production is legal—no matter where the timber is to be sold.

Given the serious nature of the infringements related to the Herakles project, we call on the Cameroonian authorities to cancel immediately the Herakles’ logging permit and seize the wood.

We urge the Cameroonian and European authorities to deepen their cooperation to ensure that the FLEGT Partnership Agreement between Cameroon and the EU is upheld in letter and spirit.