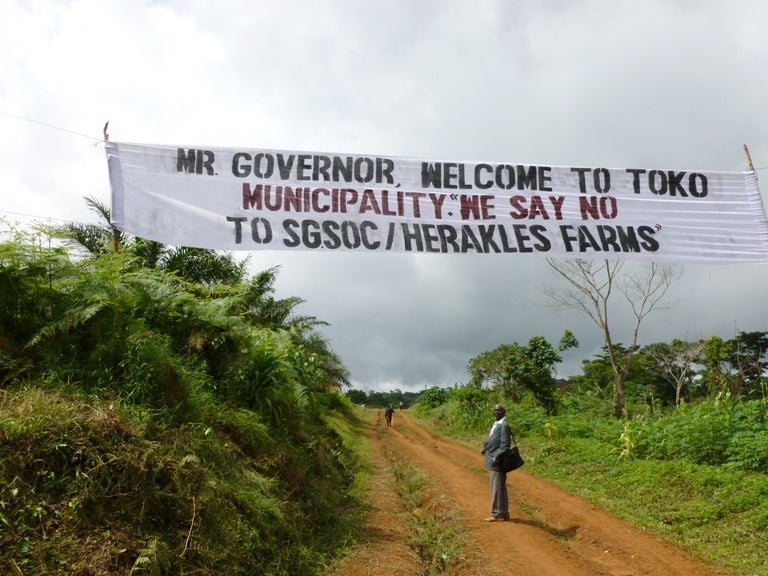 Two local protests broke out in the Southwest region of Cameroon this summer in opposition to the New York based company Herakles’ Farms, who have already planted nurseries for their proposed palm oil plantation.

In the village of Fabe, one of the communities hosting a nursery, a revolt was staged against the company.  Protestors blocked the entrance to the nursery, telling workers that they had put a curse on the seedlings, scaring off all the workers.

In an in-depth report, Reuters interviewed the local chief from Fabe who has been accused of corruption for his cooperation with Herakles.

Although the village chief Wangoe Philip Ekole says he believes the project will bring jobs and wealth, Many of his 200 or so subjects accused him of seeking to enrich himself through the project. Some even disowned him as their leader.

In another event, a community in the Ndian Division held peaceful demonstrations against the project, during the visit of the Governor of the Southwest Region.  Despite peacefully organizing, local administrators made arrests for not having advised of the protest in advance.  Local activists Nasako Besingi said protests held in June in Fabe and other villages in the concession suggest many locals do not want the plantation. He reported that over 10 police summons have been served against opponents since late May.

Reuters interviewed another local leader, deputy mayor of Mundemba, Peter Okpo wa Namolongo, who said the last thing he wants is more palm, in a country that is already crowded with palm oil plantations. "We don't lack palm oil. Shall we not also have space for our family? We have children to feed," said Namolongo…We are tired of palms, palms, palms."

Herakles conducted a survey of village attitudes to the project in late 2010, along with armed guards due to their security concerns.  The company later acknowledged that "may have influenced some of the participants in their responses." Subsequent meetings to allow locals to comment on Herakles' environmental assessment for the project were held at the height of the rainy season last year, when it is extremely difficult to travel. "It was improper to organize public hearings during that period when you know people will find it difficult to get to Mundemba," said Malle Adolf, a lawyer who has filed suit against the company.

For Herakles, the ambiguity of their free, prior, and informed consent from the community and shoddy environmental impact study casts shadows on their claims to sustainability and respect for the Indigenous peoples whose land they occupy.  It also puts their project at risk for being denied approval from the Roundtable on Sustainable Palm Oil, a certification they need.

Express your concern to Herakles Farms, New York senators, and members of the Roundtable on Sustainable Palm Oil, here.