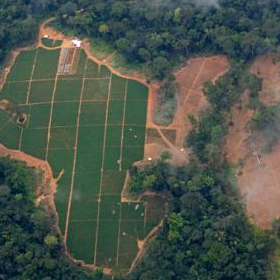 Amsterdam, 27 May 2014 - Illegal and corrupt behaviour by foreign-owned companies engaged in establishing large palm oil plantations not only threatens local communities and forested areas throughout west and central Africa, but will seriously undermine legislation being set up between African countries and the European Union to prevent just that says Greenpeace International.

In a new report published today, Greenpeace reveals how one company in Cameroon, has colluded with government officials to illegally obtain a permit to export timber that itself was illegally felled in order to establish a palm oil plantation in the South West region of the country.

Licence to Launder also shows how Herakles Farms, nominally a US company, is attempting to rescue its dire financial situation by using its illegally obtained licence to export timber to China.

"Herakles Farms has been able to operate with impunity in Cameroon for several years now despite lacking all the required legal documentation/approval to do so," says Irène Wabiwa, head of forests campaign for Greenpeace Africa.

"The company claims that profits from any of its timber would go to the Cameroonian people, but its current attempts to commercialise illegal wood demonstrates that its true agenda is simply to rescue a financially stricken project."

Cameroon is one of several countries in the Congo basin that has signed a Voluntary Partnership Agreement (VPA) with the European Union, part of the bloc’s FLEGT plan aimed at better forest governance and combating illegal timber trade.

Recent research indicates an important part of the tropical timber on the international market comes from "illegal forest conversion operations". For VPAs to be effective, this reality will need to be taken into account during further implementation of these agreements.

"Herakles Farms is a test case for the credibility of forest governance in the VPA era. The EU will have to show it is able to get its partner, Cameroon, to honour the partnership agreement," says Irène Wabiwa.

"Considering the inaction of the Cameroon government, Greenpeace has brought the case to the attention of the national prosecutor, asking for the timber to be seized and that Herakles Farms and any government officials involved in the illegal allocation of the permit are held accountable."

The Herakles Farms project has been beset by controversy from the time it was announced in 2009. It has provoked fierce opposition from local communities and conservation scientists as well as local and international civil society over its activities which will destroy a densely forested area.

Hundreds of thousands of hectares of land in central and West Africa have been leased to foreign-owned organisations seeking to develop large-scale industrial palm oil plantations. Those deals are opaque in nature and should be seen in the wider context of land grabbing on the continent.

Africa is seen as a next frontier by some of the world’s largest palm oil producers who hail from South East Asia where large-scale production is a key driver of deforestation. Several of these new projects are being developed in the Congo Basin, home to the second-largest rain-forested area in the world.