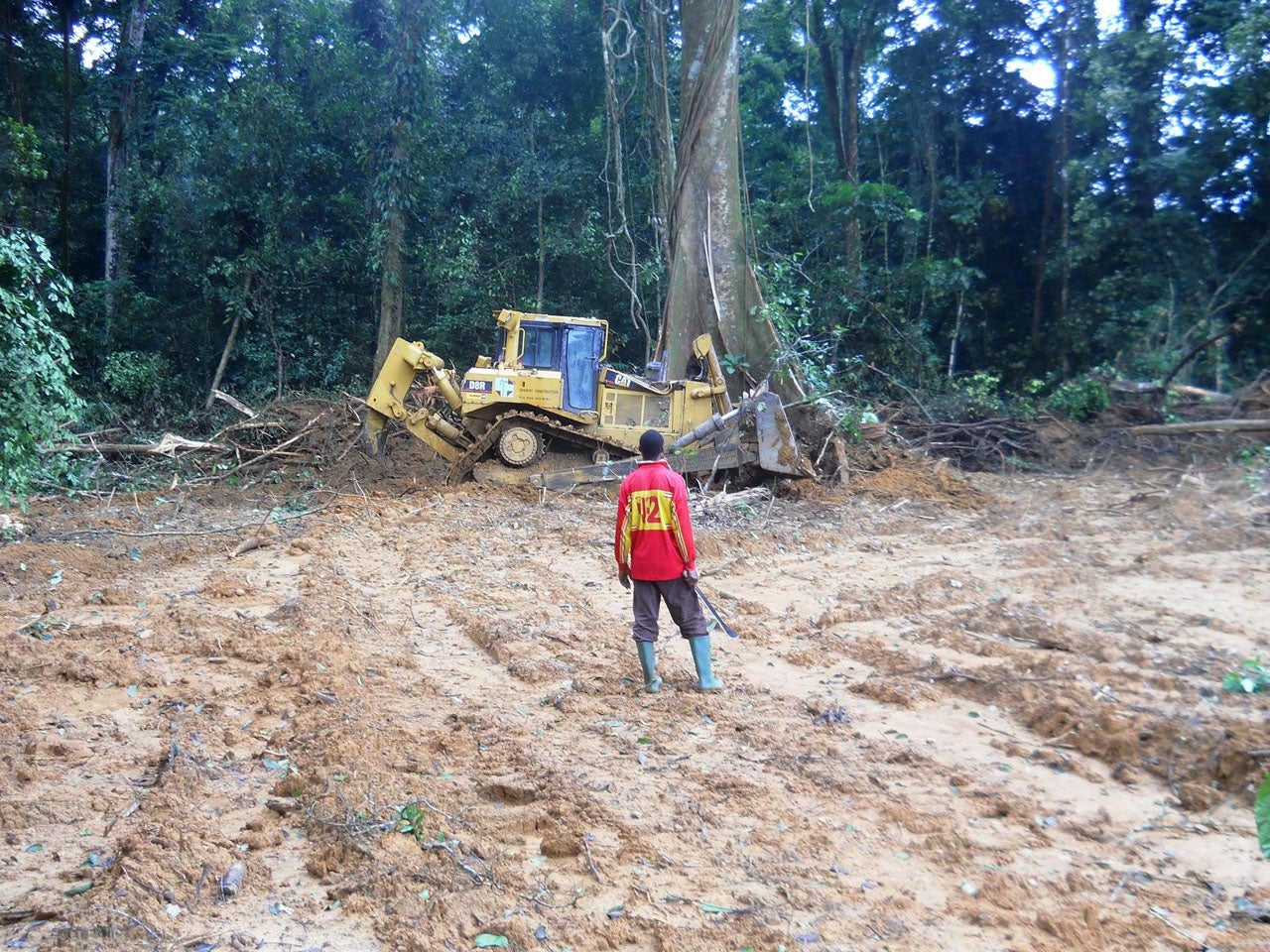 The lead up to this summer’s World Cup is already dominating international news with every manager’s squad selection being scrutinized while analysts attempt to predict the tournament’s winner.

Greenpeace has been closely monitoring another world-wide phenomenon: illegal deforestation.

Herakles Farms laid solid team foundations by signing an illegal contract with the Cameroon Government in 2009. In 2010, the company unlawfully established oil palm nurseries prior to conducting an environmental impact assessment and with no right to the densely forested land it occupied. In 2011, the firm raised its game violating a Cameroonian court moratorium on its activities.
Known as SGSOC (the name of its local subsidiary) in Cameroon, the company sustained a key injury as it was busted for illegal logging by the Cameroonian Ministry of Forestry and EU-funded independent forest observer in 2012. Their form hit an all-time low in 2013 when its right to clear the forest was suspended by the Ministry of Forestry.

As investors fled and employees were furloughed, the few remaining supporters called for new management. New men were called in to stabilise Herakles and they acquired Presidential Decrees to finally officialise their presence in Cameroon (while violating law’s on community right to consultation) – although ambitions were tempered when they received the right to only 20,000 hectares of land, way below the 70,000 they were originally after. The comeback was so impressive Herakles Farms was even named to Global Exchange’s prestigious top 10 corporate criminals list.
Great suspense surrounds the company’s performance and preparations in the lead up to the 2014 World Cup…and Herakles has not disappointed.

Newly published Greenpeace research has revealed that Herakles Farms, using a front company, colluded with Cameroon’s Minister of Forests to unlawfully obtain a logging permit allowing it to clearcut 2,500ha of forest and export valuable species of timber, while paying 17 times fewer royalties to local communities than average.

Herakles had previously declared in an open letter it would leave the timber for the Cameroonian Government to make “many millions of dollars.” In exchange, the company argued, it should be entitled to pay a very low land rental fee for its palm oil plantation. “Say one thing and do the opposite” has come to define Herakles’ tactics and style of play, but they are not alone:
Cameroon and the European Union signed a trade agreement (known as VPA) to eradicate illegal logging and part of worldwide efforts to reduce tropical deforestation.

The VPA, which entered into force in 2011, requires Cameroon to “verify the legality of the timber and derived products” sold not only to the EU, but all other markets.

The implementation of the VPA in Cameroon has been seriously delayed. Now the Minister of Forest’s decision to illegally grant a logging permit to a company posing as a front for Herakles – without an auction (as required by law) – casts serious doubt on Cameroon’s intention to respect its obligations under the VPA.

Equally worrisome has been the EU’s refusal to take a strong stance on the Herakles’ case. Despite requesting clarification on the legal status of Herakles’ timber from the Cameroon Government no less than three times, the European Union has cited a delay in VPA implementation to explain why they have not used their influence to push Cameroon to enforce legality.

The VPA’s credibility is floundering, but it didn’t stop the EU-Cameroon joint progress report published this month to make the claim that “considerable progress” is being made.

Greenpeace has filed a complaint with Cameroon’s public prosecutor to have the illegal timber seized, logging permit cancelled, and wrongdoers prosecuted.

The question remains, will anyone blow the whistle on this out of control team and set an example that this sort of foul play should not be allowed to threaten Africa’s forests and communities?
Or will the EU let Herakles and Cameroon continue to play the great game of illegal deforestation, without a referee?

You can help, demand the EU and Cameroon give Herakles Farms a red card!

Brendan Schwartz is a forests campaigner at Greenpeace Africa.