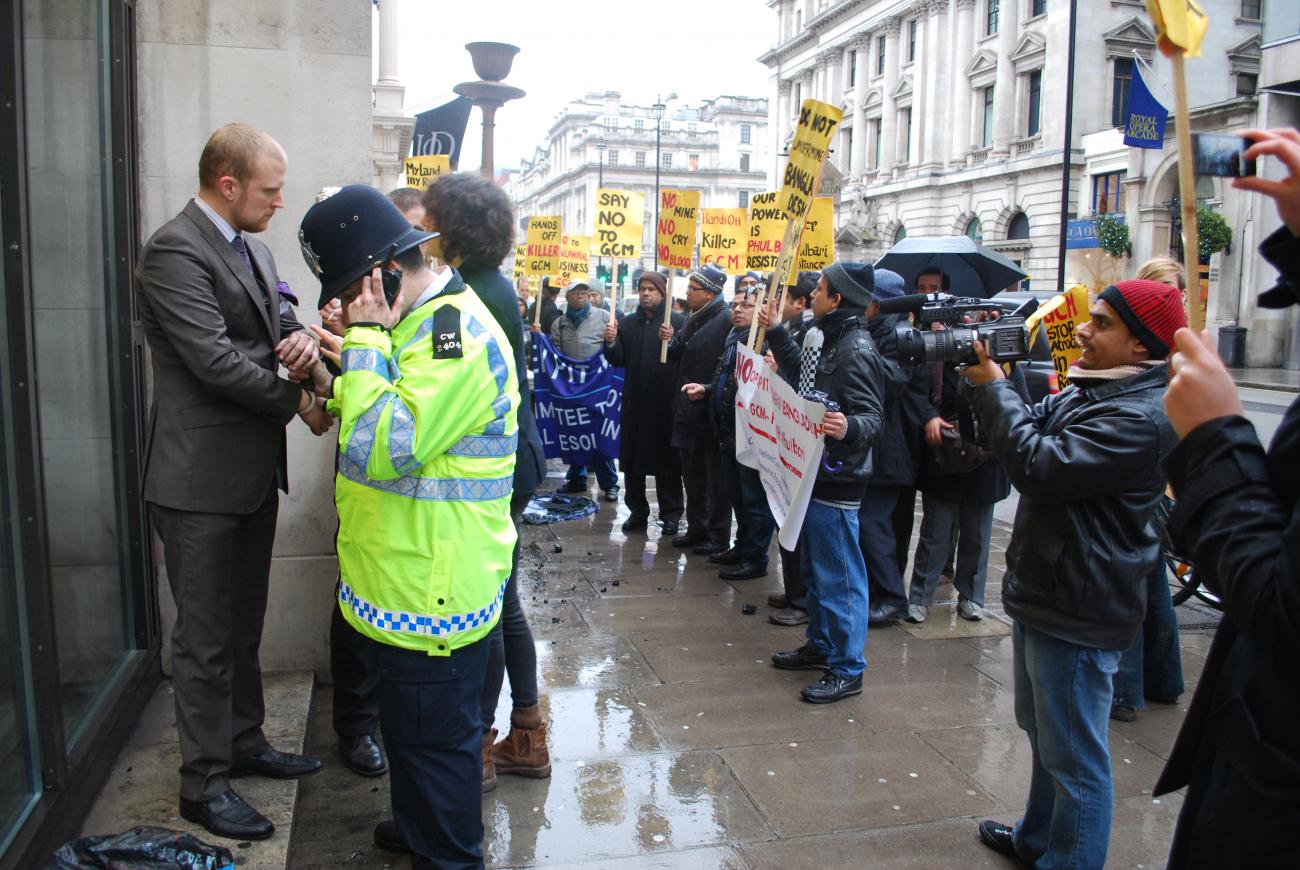 On December 20th, activists protesting an open-pit coal mine in Phulbari, Bangladesh dumped coal at the entrance to mining company GCM Resources in London.

The company was holding their Annual General Meeting. One activist dressed as Santa Claus gave company chairman Gerard Howell a present of a stocking full of coal. Two activists dressed as GCM Resources executives kicked over a makeshift hut and covered a woman in coal as part of a street theatre outside the door. Police arrested them for breach of the peace but released them shortly after the demonstration.

At the same time, inside the meeting, an activist dressed as Santa from Climate Justice Collective gave a stocking full of coal to the company chairman saying, "Ho, ho, ho, have you been naughty or nice this year? This year you threatened to evict 220,000 people so you could profit from polluting the climate. St Nick always knows - your stocking's full of coal!” The meeting was quickly broken up following the intervention from Santa. Meanwhile, activists from the Bangladeshi community and other organisations including World Development Movement and London Mining Network asking numerous questions about the highly contentious Phulbari project and its massive human rights impacts.

Stock prices had already been affected by the time the meeting took place, on word of the protest published a day earlier by the UK's Daily Mail.

In 2006 three people were killed and over 200 injured when paramilitary troops fired on a protest of some 80,000 demonstrators in Phulbari. If completed, it has been estimated that the project would destroy the homes, lands, and water sources of as many as 220,000 people, and forcibly evict an estimated 130,000 people.

Seven Special Rapporteurs of the United Nations issued a joint UN press release on 28 February, 2012, calling for an immediate halt to the project on the grounds that it threatens the fundamental human rights of hundreds of thousands of people, including entire villages of indigenous people, and poses "an immediate threat to safety and standards of living."

GCM Resources, a UK-based multinational company, is moving to implement the project despite the human rights and environmental concerns that have been raised.

The situation in Phulbari has been volatile since 22 Nov, 2012 when a 48 hour general strike halted trains, blockaded highways, and closed all shops, educational institutions etc. National press in Bangladesh reported that security forces including about 500 police, Rapid Action Battalion forces (denounced as "a death squad" by Human Rights Watch), and members of the Bangladeshi border guard have been deployed to Phulbari.

On January 1st, protests in Phulbari called for Asia Energy, GCM's local subsidiary, to remove local offices before March 30th, threatening to destroy the offices if they are not removed by that date.

See our campaign to stop the open pit coal mine and take action, here:
Bangladesh: Ban Coal Mine, Save Forests and Farms