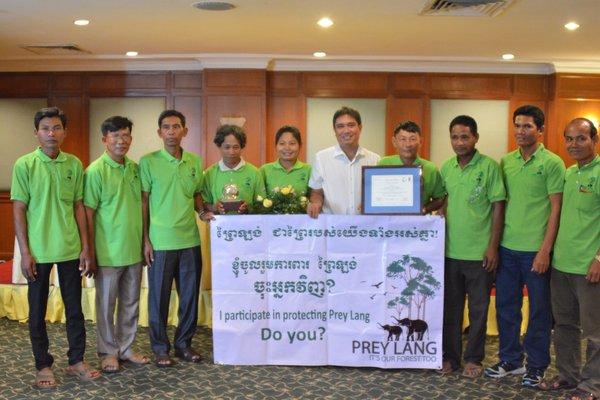 The Cambodian Government recently delivered a set of ambitious goals that outline how the country plans to take part in achieving the carbon reductions set forth in the UN climate meeting in Paris – the COP21.

The Cambodian Intended Nationally Determined Contribution, or INDC, focuses among other things, on preserving Cambodia’s forest cover, recorded at 57% in 2010, and to further increase it to reach 60% by 2030.

The Prey Lang Community Network, a group of Indigenous Kuy communities who inhabit and protect the largest, intact lowland forest in the region, said they “welcome the government’s focus on Cambodia’s forest resources, and it hope that its members, together with members of others networks and civil society organizations can take this opportunity to create an even stronger relationship between the different parties – national and sub-national authorities, private companies and civil organizations – in a common collaboration to protect the important forests of Cambodia.’’

The Prey Lang Network were awarded the 2015 Equator Prize for their dedication to the protection of forests. In December, Sopheap Hoeun and Sopheak Phon, two representatives of the Prey Lang Community Network, traveled to Paris to the prize, which was awarded to the network by the United Nations Development Program, which comes with recognition from world leaders like Jane Goodall as well as celebrities like Edward Norton and Alec Baldwin. The prize includes US $10,000.

In response to the government’s statements at the COP 21, Mr. Sopheap Hoeun encouraged strong collaboration:  “Prey Lang and all other forests in Cambodia play an important role in achieving Cambodia´s climate goals. PLCN has a long tradition of conducting forest patrols to stop illegal logging and it is our experience that this is a very important tool to prevent further deforestation. We would like to continue offering our voluntary work and assistance to the Cambodian government in order to help them protect the forests and reach our common climate goals. The 10,000 USD prize money will be spent on continuing and enhancing this work. I believe that our assistance can be key in achieving the climate goals and especially reaching the goal of 60% forest cover.”

However, while the government has committed to the goals of increasing forest cover, there are ongoing reports of intimidation and violence against members of the Prey Lang Network. Rather than encouraging activists to protect the forests, government officials threaten and arrest them and use the courts to cause them trouble,  the members have appealed to the government to prevent all forms of intimidation against its members by courts, police and soldiers as well as local officials involved in the timber business.

Mr. Sopheap Hoeun said officials had been unwilling to end illegal logging because high-ranking members of the government are involved in the crime. “The government should investigate all officials and local authorities involved in the timber business and illegal logging,” Mr. Sopheap said. The network has conducted monthly patrols of the forest, which spans four provinces north of the Tonle Sap Lake. It will double this to twice a month," he stated.

Bun Leang, a member of the network, said activists working in the four provinces Prey Lang extends into faced a backlash from companies that had land concessions in the forest because these companies were cutting down trees. He said the network was only able to slow down the forest’s destruction. “If we don’t try to protect it the forest will disappear very quickly,” Mr. Leang said. Prey Lang extends into northern Kampong Thom province as well as southern sections of Preah Vihear, Stung Treng and Kratie provinces. It covers an estimated 3,600 square kilometers and is home to about 200,000 people, primarily Kuy and other Indigenous minorities.

The Khymer Times reported that Cambodian Prime Minister Hun Sen said forestry crimes are "a major problem'' and lamented the inability of authorities to effectively prevent them.