On the Border of India and China, the Adi Face a Confluence of Issues 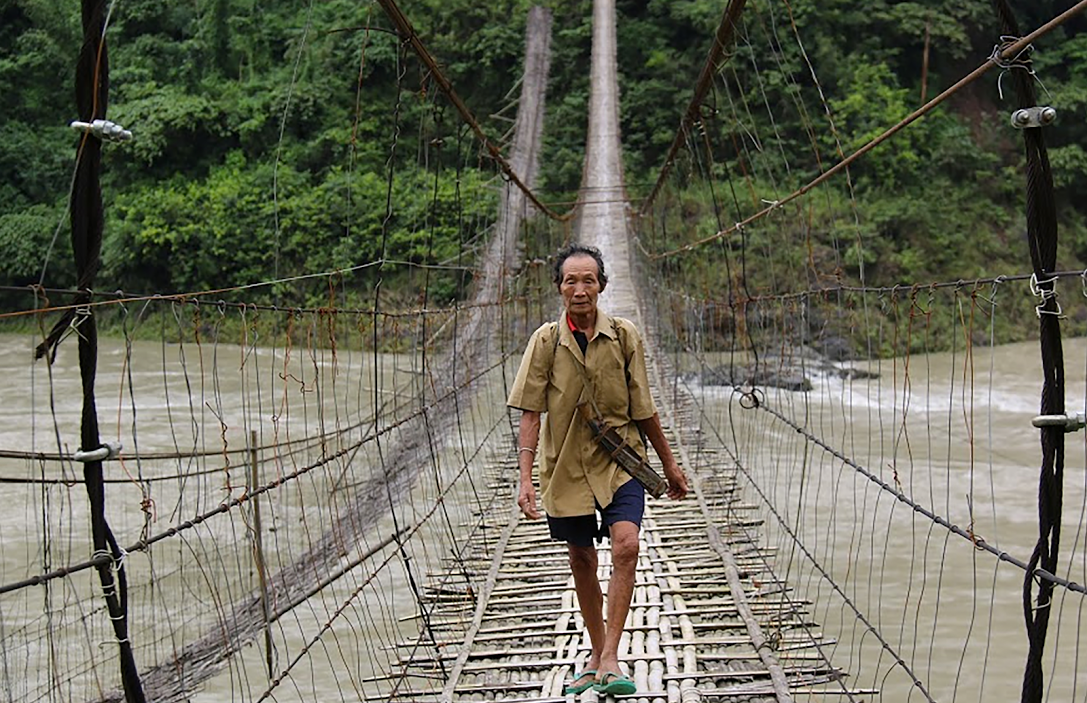 “It is never about resolving differences and working together. Never! It is always about India and China,” mourns an elder from Siskin village as he crosses a bridge close to the border of India and China. The Adi community collectively weaves these bamboo bridges every year across the pristine Siang River.

The Siang River originates in Tibet, elegantly flows through the Himalayas, enters the northeast Indian state of Arunachal Pradesh, and like a sacred thread connects the Tribes of the region, especially the Adi villages around the old town of Pasighat. The Adi lifeways are beautiful with shamanic chants of their mythologies of origin, animistic rituals around nature, and amicable resolution of disputes in their traditional courts.

The people here have always faced conflicts. In 1962, soon after the Tibetan Uprising of 1959 when India granted asylum to The Dalai Lama, the Chinese army invaded this area of Arunachal Pradesh (also known as the land of the dawn lit mountains), on the pretext of a disputed Himalayan border.  Beyond being subjected to territorial interest, these Indigenous people of the hills were struggling to build bridges with the people of the valley. “The Assamese in the valley used to call us Abhors, meaning uncontrolled savages. The British also continued calling us savages. We revolted; we wanted to be called Adi. In 1972 this area, the NorthEast Frontier Agency (NEFA) became a Union Territory of India and in 1987 a state. From then on we are Adi. Adi means hills. People of the hills,” explains Oshang Ering, a respected Adi elder, the first matriculate of the Tribe.

With the memories of 1962 Sino-Indian War still fresh, China continues to reassert its territorial claim. “We are a part of India. Though there is a strong history of neglect and alienation, Arunachal Pradesh and this Northeastern region is a part of India. Why will we part? If by chance China invades us again. I will be the first to run ahead and fight,” says the leader of the vegetable sellers in the women-driven Pasighat market. It is apparent that the Adi people want to be left alone. “We are generally cooperative people but during wars, we can be fierce warriors. However, we don’t fight unless it is decided in our Kebang (traditional court),” says Ering calmly. “Our Kebang is the perfect form of democracy. Perhaps, democracy was born here,” says Kalim Borang, cultural analyst and writer, with beaming pride. However, it is unfortunate that the Kebang is not seriously consulted for decisions regarding Adi land and now water.

On the Chinese side of the border, where the Siang River is called Tsangpo, multiple mega dams have been built. On the Indian side, there are plans to build even more. Flowing through the land of the Adi, the Siang meets the Lohit and Dibang Rivers downstream to form the mighty Brahmaputra River that touches the lives of millions of people as it flows through the Assam valley. The Siang is now a site for a Great Dam War. There seem to be no dialogue between India and China. “Well strategized run-of-the-river can help. But if the dams on Brahmaputra and its tributaries are not planned well, the flora and fauna of the entire region is it risk. There can be a Tsunami every night,” says environmentalist Pradip Bhuyan, whose activism and petition has resulted in the Green Tribunal ordering a detailed assessment of the dams. “These dams are dangerous. We have our usual catastrophic floods in June and July. During that time if China opens the dams, then even without missiles, the Assamese people will be destroyed,” says Roti Pegu, a boatman ferrying people across the Brahmaputra, between Assam and Arunachal.

In a few years, the 3.07-mile (4.94 km) Bogibeel Bridge connecting Assam and Arunachal will be complete and Roti along with many other boatmen will loose their livelihood. Perhaps the bridge was an influencer for the current government of India to include Pasighat as a potential smart city in its development agenda. The unending line of posts being constructed for the bridge seems to represent the vanishing point of Indigeneity.

There is already an ongoing migration to this tribal land – both legal and illegal. And as a microcosm of the over two hundred ethnic and tribal communities of northeast India, the Indigenous identity of the Adis, is under threat. The Adi culture and way of life is fast changing. The animistic Donyi Polo (sun and moon God) rituals are being forgotten and the Miri (priests) who can chant the Abang (mythological chanting/oral history) are becoming rare.

“Adi does not have a script. It is an oral language. Young people today do not know how to speak Adi. The children of the rich people do not study here. They study far away. When they visit, they speak English and Hindi, though they are Adis. If we speak in Adi, we are stupid. If they can speak in English and Hindi we are stupid. That is what is happening. They forget their own language,” say the elders of Yagrun village over a Solung (Adi planting festival) dinner.

With the Adi youth moving to bigger cities in pursuit of an urban life, the famers have to employ migrant workers. “Apart from the challenge of paying wages, another problem is that some of these workers from the neighboring states are insurgents in disguise - United Liberation Front Of Assam (ULFA), National Democratic Front of Bodoland (NDFB) from Assam and National Socialist Council Of Nagaland (NSCN) especially in the Tirap/Changlang districts of the state,” says Jamo Tani, an Adi farmer and activist from the Pasighat area. Though Arunachal does not have a homegrown insurgency, various factors including insurgency in the interstate border have resulted in the imposition of the unpopular Armed Forces Special Powers Act (AFSPA), which provides special powers to the Indian army resulting in massive human rights violations. With Chinese and Indian army modernizing their warfare, AFSPA providing impunity to the Indian army and insurgency in the state borders, conflict has become a way of life.

With the recent developments in 2016 - political unrest in the Arunachal Pradesh government, ruthless floods in the Assam valley, increase of Indian and Chinese armed forces to guard or expand territorial interests and the ongoing great dam war – it has become both important as well as urgent that India gives Arunachal Pradesh and the northeast the attention it deserves and the powers in New Delhi and Beijing engage in a serious constructive diplomacy and dialogue.

Adi | At The Confluence: is an award winning documentary film that portrays the resilience and dives deep into this confluence of issues faced by the Adi people on the border of India and China. See www.theaditribe.com. The opinions included in the article are excerpts from interviews filmed for the documentary.

--Joor Baruah is an audiovisual artist interested in using documentary, photography, music and new media for social change. His creative work, mostly revolving around borderland spaces and people, include: Glimpses of the Misty East (docu-series, assistant to Dr. Bhupen Hazarika), Vanastree: Women of The Forest  (documentary, co-editor/ music), Resilience (idoc, interactive designer) and Brothers (musical album, singer/music design). He is currently working on the feature-length and interactive versions of Adi | At The Confluence and American Justice On Trial, about the sensational trial of Black Panther leader Huey Newton. His work is inspired by the folk songs of his mother Rose Baruah and his uncle - singer/filmmaker and revolutionary Bhupen Hazarika. Joor Baruah has an M.A. in Social Documentation (Documentary Filmmaking) from the Films & Digital Media, History of Art & Visual Culture and Art departments, University of Santa Cruz, California and an M.B.A from Central University, India.