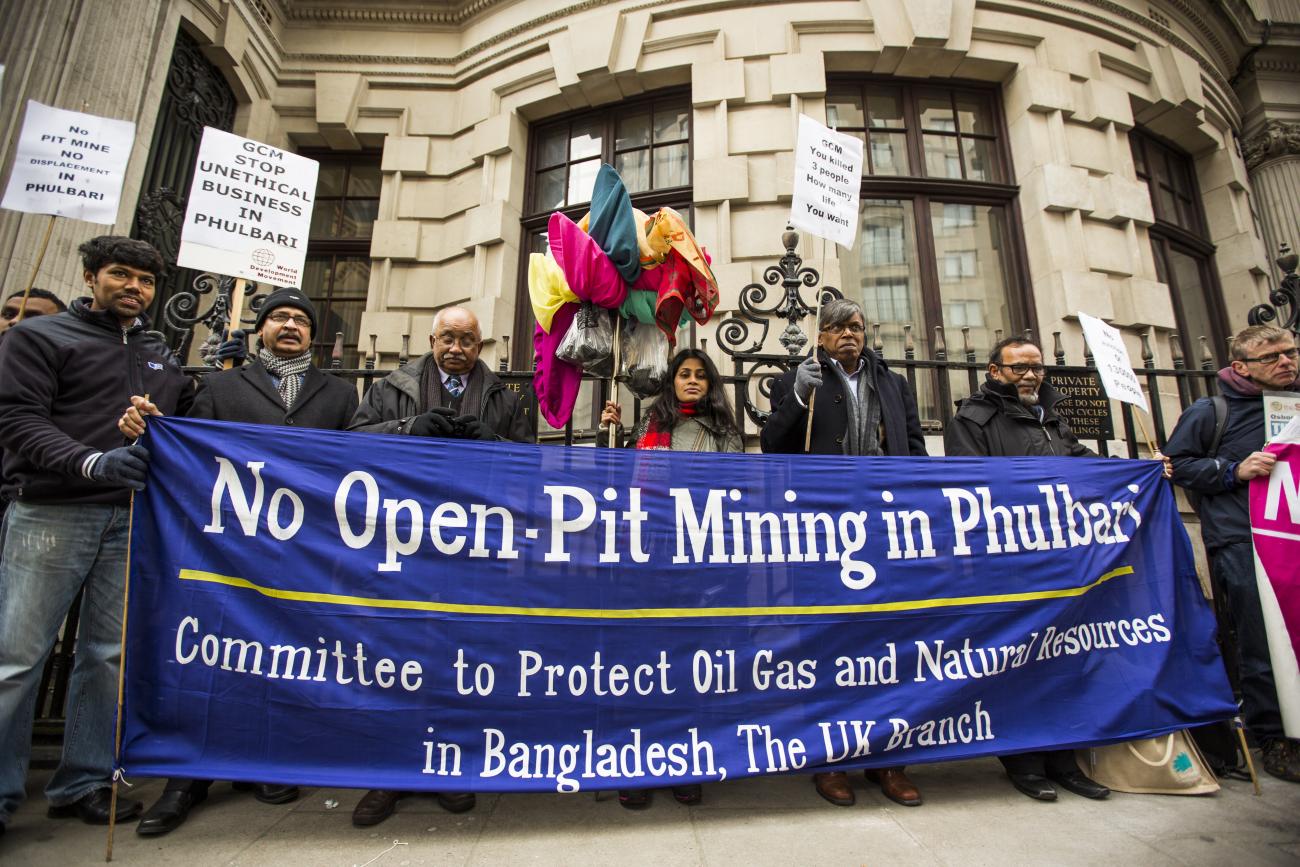 On Tuesday, December 9th, 2014, Bangladeshi activists, in conjunction with a diverse group of environmental and left political activists in London, heckled the investors of Global Coal Management Resources by their noise demo and coal play. Activists blocked the entrance to the Aeronautical Society by dumping coal in the doorway. They surrounded GCMs’ CEO Gary Lye and his fellows who are aggressively moving ahead to implement a massive open-pit mine in Phulbari, the northwest region of Bangladesh. At the same time a delegation of protesters disrupted the AGM of GCM by questioning the investors inside the AGM about their fraudulent business in London’s Alternative Share Market (AIM).

The event kicked off with the launch of artist Stephen Vince’s beautiful sculpture, symbolising the protest against the miners and the livelihood, culture, struggle, and resistance of Phulbari people. The sculpture, wearing a Tangali Sari, held three sacks of coals to symbolise the significance of the number three and a tribute to the three people who were killed in the dirty coal game of GCM in Phulbari.

Bangladeshi activists, carrying the sculpture and holding a banner saying – GCM hands off Phulbari, No open pit mine in Bangladesh- started to chant slogans and sing ‘tomar bari amar bari, Phulbari Phulbari’. Some protesters played drums while others entered the block calling the investors to come down and to apologise for their misdeeds in Bangladesh. Loud protesters were repeatedly warned about potential arrest by the authorities of Aeronautical Society (AS) who did not call police.

Angry protesters dumped coal on the door steps of AS, as they were prevented from taking out Gary Lye. Protesters said that they would not leave the venue before the interrogation of Gary Lye and his fellows was over. Meanwhile, a group of protesters went to check the investors’ vehicles and took over the car park as part of the blockade against Gary Lye, the company’s manipulative CEO, who was expelled from Phulnari for a 3rd time this year, on 26 November, but still continues to abuse Bangladesh government and Phulbari people.

When protesters outside the AGM were checking investor’s vehicles, a delegation of the climate activists attending the AGM interrogated Gary Lye and the board inside the AGM about GCM’s unethical business in London and abusive activities in Bangladesh. Bangladeshi activists rattled the investors to an extent that the Chair was fade up and it was Gary Lye who ended up facing the interrogation about the paperless contract and propaganda of GCM. Phulbari activists challenged that GCM does not have valid contract with Bangladesh.

Climate activists of World Development Movement and London Mining Network supported Phulbari activists, and asked numerous questions about the highly contentious Phulbari project, its huge human rights impacts and the OECD Guidelines as GCM has breached 2011 Guidelines, which do apply to the planned conduct of an enterprise in terms of prospective impacts on human rights. Activists said that the company was illegitimate, the project illegitimate and the annual general meeting of GCM was illegitimate. The meeting broke up unceremoniously and the shareholders broken up into two groups.

The delegation of climate activists came out of the AGM and joined the protesters where Golam Mostofa, Richard Solly, Jahanara Ali and Sam Sender updated the demonstrators that Gary Lye and his fellows have failed to answer the questions of Bangladeshi activists. They are even lying about national media and the government in Bangladesh. Protesters chanted slogans ‘Gary Lye is a Lier, Shame on Gary Lye’, GCM and Asia Energy, hushiar sabdhan [be aware of people power]’. One angry protester walked into the building with a sack of coal to dump on Gary Lye’s face, but was prevented by the AS’s equally racist authority who received the coal on behalf of the investors and threatened the protesters to call police.

The demo ended with a manifesto calling for an end of GCM’s Phulbari project, and by criticising the UK NCP’s controversial recommendations to the company. The founder and coordinator of Phulbari Solidarity Group, Dr Rumana Hashem, read out the manifesto of the demo and called the London’s AIM to delist GCM. The manifesto concludes by expressing full solidarity with the Phulbari people’s struggle, and condemned the UK government for failing to hold the UK-based company to account.

Miners GCM Resources is the subject of a complaint to the Organisation for Co-operation and Development over the controversial coal mine. They have only one active project, the Phulbari coal project, which awaits permission from the Government of Bangladesh to go ahead. But the people in Phulbari want to put the company out of Bangladesh, ban the Phulbari project and to take the company and its investors to public court for their abusive and fraudulent activities.

Phulbari, the town in upheaval in northwest Bangladesh where three people were shot dead during the protest against immense open pit mine in 2006, has become volatile again since, the Chief Executive Officer (CEO) of the AIM-listed British company, Gary N Lye, and attempted to conduct consultation with locals in the town centre. There were two days long blockade in Dinajpur-Dhaka highway, and over a thousand people braved cold to raise their protest at Gary Lye’s visit last month. On 26 November, locals in Phulbari surrounded Lye GCM’s Bangladesh subsidiary Asia Energy's local office, when the CEO had to leave Phulbari and Dinajpur under police protection. Violent protests erupted where 2 were injured, and protesters have demanded Gary Lye’s immediate arrest and expulsion from Bangladesh. A month-long programme including nation-wide protests have followed. Protesters will not go back home until their demands are full-filled.