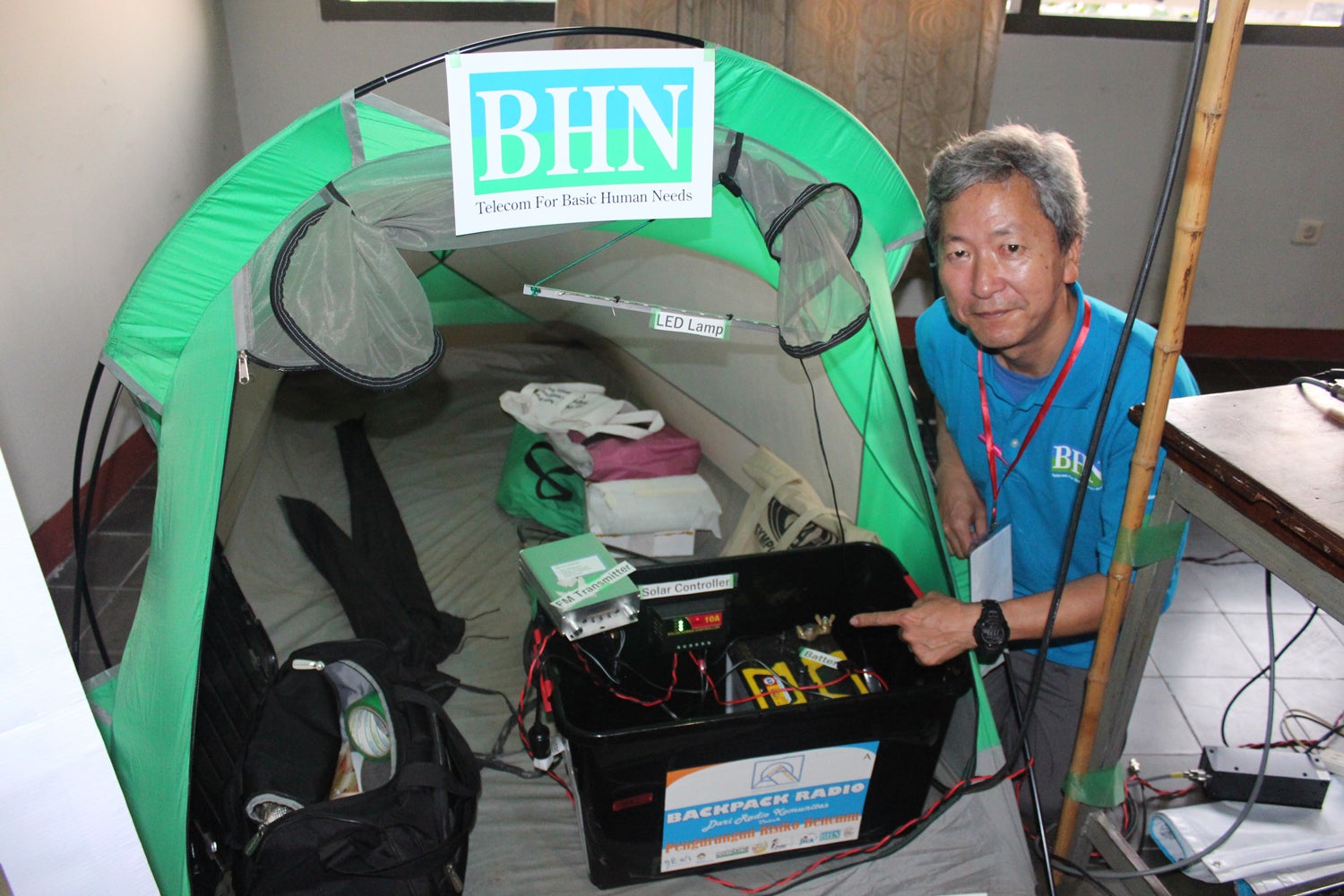 In March 2011, a 9.1 magnitude earthquake, the most powerful earthquake ever recorded in Japan, hit and caused the loss of thousands of human lives, and destroyed infrastructure including communication facilities. The chaos affected not only for victims, but also relief workers by interrupting communication channels among them.

In response, a group of engineers, associated with Basic Human Needs (BHN), a NGO based in Japan, came up with the idea to design a prototype for a portable mobile radio station which would to cater communication needs during a disaster.

“The idea to design a mobile radio station mainly originated from the disaster reduction efforts around the world,” says Naoshige Shimura, Engineer at BHN, further adding, "and the need for timely and reliable information about food and shelter and basic human needs for survival and also for preventing and/or mitigating loss of lives." Shimura is one of the Engineers who was involved in developing a backpack radio at BHN.

When a disaster occurs, one of the most useful media is radio, but it may not be possible to start broadcasting in a damaged situation. If a radio station is destroyed, it cannot resume broadcasting about what is happening in real time, where and how rescue supplies can be accessed, and how to return to normal life. Broadcasting of such information, including daily conversations, can deliver hope to victims. A mobile radio station in such situations can be the best tool for carrying out evacuation efforts and relief efforts informing people how to access food and other emergency supplies. Like Japan, many countries are particularly vulnerable to natural disasters such as earthquakes, typhoons, volcanic eruptions, and tsunamis due to climate and topography of the location.

"A backpack radio portable radio station, a Japanese tool, now has been massively used in many disaster-prone countries such as in Nepal, India, Indonesia and so forth," says Shimura. "If the infrastructure of the community radio is destroyed by natural disaster, it takes time to restore it. In such situations, the mobile backpack radio can be important and easy to start, especially to deliver information to a small community or city."

As there were frequent disasters in Indonesia, BHN held a workshop about the backpack radio system and process of assembly in March 2018. Following the workshop, some seven radio stations have been equipped with and are ready to start the emergency radio system.

Sharing an experience, Sumara further said, "The backpack radio is used to support disaster areas in Indonesia. At the time of the central Java earthquake that occurred in April 2018, we operated a temporary disaster broadcasting system for two months from the office of Bajarnegara. Also, in October 2018 in Bali, Agung Mountain, where eruption is reoccurring, the disaster countermeasures headquarters used it for information dissemination.”

The backpack radio consists of small-sized transmitter with the capacity of 15 Watts, an omni-directional antenna, a wireless transmitting and receiving antenna that radiates or intercepts radio-frequency in all directions, a solar panel, and battery with microphone to supply electricity. It is easy to assemble, can be put up in any place, and is compatible with mp3 players or smartphones. The whole system costs less than $500 US and it can broadcast even during power outages.

“This system of radio easily can be put in a backpack and can be transported by riding on bicycle or walking a certain safe distance to then set them up and operates easily like any other radio station,” emphasizes Shimura. "Of course the functionality is limited, because of its low output power. The antenna can be placed in height, but depending on the geographic conditions, the backpack radio can cover 2 to 3 kilometers."

Though this mobile radio may not be the best tools for all times, it can serve as the best tool especially during emergency situations.