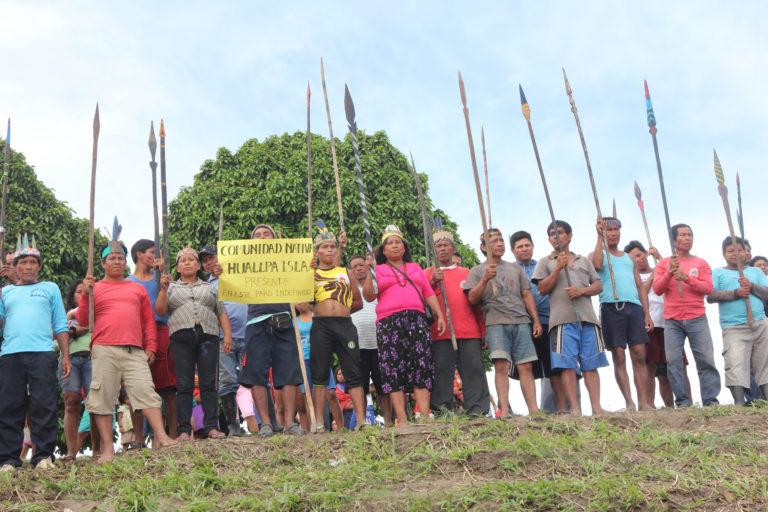 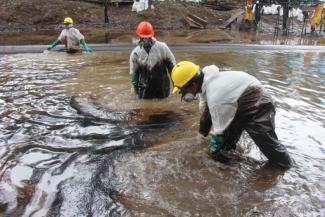 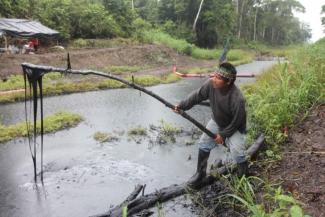 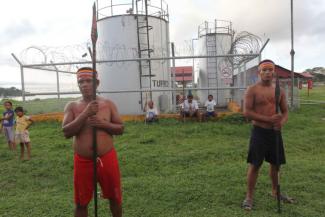 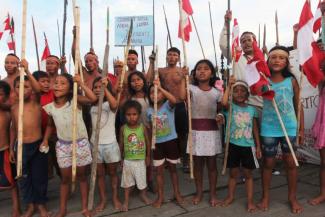 By Barbara Fraser for Mongabay. Published under Creative Commons BY-NC-ND

Saramurillo, Peru — As a protest by Peruvian Amazonian Indigenous communities against oil pollution on their lands entered its eighth week, tensions rose on October 23 after a new pipeline oil spill and a shooting incident in which at least one protester was wounded.

Hundreds of people gathered since September 1 in Saramurillo, an Indigenous community on the bank of the Marañón River in Peru’s northeastern Loreto region, have blocked transportation on the river to press for their demands. The protesters are calling for a state of emergency to be declared in two districts of the lower Marañón Valley where a series of oil spills has affected five Indigenous communities.

They also seek an independent inspection of the network of pipelines serving the oil fields and replacement of corroded sections; remediation of polluted sites and ecosystem restoration; compensation for damages; an environmental monitoring law; and a “truth commission” to conduct an in-depth study of oil operations and their impact on communities and the environment.

Underlying the protest, however, is a call for a national debate on whether oil drilling should continue in the Peruvian Amazon.

“We want a discussion about the viability of oil production in the Amazon, because the way it’s done now is not viable,” said José Fachín, 35, a Kichwa law student and adviser to the leaders of the Indigenous organizations supporting the protest.

The protesters lifted the river blockade — allowing passenger and cargo vessels to pass, but not oil and fuel barges — for about a week before and a week after a two-day meeting with government negotiators in Saramurillo on October 11 and 12.

They resumed the blockade on October 20, saying the government’s initial response to their demands, on October 18, was inadequate. Officials sent a more complete response on October 21. Two days later, people on a passenger boat attempting to pass the blockade fired at protesters, injuring a man in the hand.

The protesters stopped the vessel and posted photographs on social media showing three men whom they identified as employees of the transportation company being held in a community building in Saramurillo until legal investigators arrived.

Also on October 23, Petroperú, the state-owned company that operates the pipeline that carries crude from Amazonian oil fields across the Andes Mountains to the coast, reported that vandals had cut the pipeline in Nueva Alianza, spilling oil into a stream that flows into the Marañón River.

Nueva Alianza was the site of two spills reported on August 21 that dumped about 4,000 barrels of oil into a canal built to contain the pipeline. Cleanup of that oil was under way when the new breach was reported. The August spills helped trigger the protest in Saramurillo.

The newest spill is the ninth this year from the pipeline. Petroperú has attributed the last six to vandalism, although Osinergmin, the government agency responsible for overseeing energy infrastructure, has not ruled on them.

Some observers have suggested that contractors hoping to snag cleanup work could be vandalizing the pipeline, while Fachín said the cuts could be an effort to discredit the protest. Two spills — reported in the communities of Monterrico on September 25 and the community of 6 de Julio on October 14 — occurred after the protest began. Both communities are just upstream from Nueva Alianza.

Nueva Alianza, Monterrico, and 6 de Julio were not among the almost 47 communities that Fachín said had sent villagers to participate in the protest.

Saramurillo, where the protest is centered, is a cluster of wood-frame, thatch-roofed buildings on the bank of the Marañón River beside the pumping station that marks the beginning of the 845-kilometer Northern Peruvian Pipeline, which was built in the 1970s.

The capuccino-colored river is fouled by mine tailings, sewage, and solid waste as it flows down the eastern slope of the Andes Mountains and joins the Ucayali River in Peru’s Loreto region to form the Amazon River.

It also receives pollution from Peru’s oldest Amazonian oil fields, now known as Block 192 and Block 8, which began operating in the 1970s. The fields straddle the Corrientes, Pastaza, Tigre, and Chambira rivers, are crisscrossed by aging pipelines, and are inhabited mainly by Achuar, Kichwa, Awajún, Urarina, and Kukama-Kukamiria people.

Except for a few dozen communities that now have temporary water treatment plants, villages lack potable water and sanitation systems. Villagers must rely on river water or rainwater for drinking, cooking, bathing, and washing.

Government agencies have a list of at least 1,000 polluted sites in the two oil fields that require remediation, but Indigenous organizations in the region say there could be more than twice that number.

Protests over pollution have led to various agreements between Indigenous federations and the government in recent years, including one, the “Dorissa Act,” which was signed 10 years ago this month.

That agreement forced Pluspetrol, the Argentina-based company that was operating Blocks 192 and 8 at the time, to re-inject wastewater from pumping back underground, reducing pollution.

Except for the re-injection agreement, however, those pacts have gone largely unfulfilled, leaders of the current protest say. They also complain about the sluggish pace of most negotiations with the government.

Rolando Luque, the chief government negotiator at the meeting in Saramurillo, promised “rapid and timely” action on the protesters’ demands. He said the National Office of Dialogue and Sustainability, which he heads, will also follow up on agreements to ensure compliance.

As part of an agreement on immediate humanitarian aid, the government delivered drinking water and food to Saramurillo, Nueva Alianza, and Monterrico on October 21 and 22. Zapata said the deliveries were to be one-time assistance.

He also said Petroperú plans to hire an outside auditor to evaluate the pipeline and determine what additional repairs are needed in order to resume operation, which was suspended in February after two spills. The company expects that process to take about four months, while an overhaul of the pipeline could take four years, he said.

Luque said possible future meetings between the protest leaders and government negotiators will be mapped out once the Indigenous leaders respond to the government’s most recent letter.

Leaders of the protest say the negotiating team lacks the power to make decisions on the spot and are insisting that government ministers travel to Saramurillo to meet with them.

Officials set a precedent in a different case on October 22, when Martín Vizcarra, Peruvian vice president and minister of transportation and communications, and Justice Minister Marisol Pérez Tello traveled to the southern Andean region of Apurímac to meet with people protesting a new copper mine’s use of roads on their lands. A local man had been shot to death in that protest.

Besides facing off against the government, the leaders in the Saramurillo protest are also challenging Indigenous organizations in the oil-affected watersheds that have been involved in negotiations with the government over the past two decades.

Four organizations — one each in the Corrientes, Pastaza, Tigre, and Marañón watersheds — have taken the lead in those talks in the past, but have stayed away from Saramurillo.

Fachín and other leaders of the protest in Saramurillo say there are at least 15 organizations that represent communities in the watersheds affected by oil operations, as well as some unaffiliated communities, and all should have a seat at the negotiating table.

He said the four federations that have long been considered the main representatives of the watersheds, as well as other organizations that have taken a wait-and-see stance, have been invited to join the protesters’ cause.