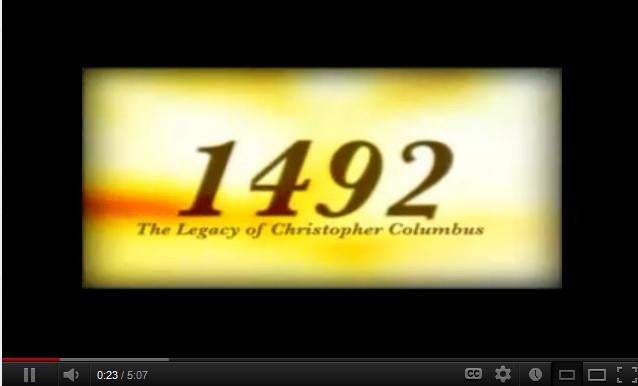 Christopher Columbus arrived as an immigrant to "the New World."

He did not "discover" America. Today, let's remember and celebrate the People who were here first!

1.  Learn about the American Precolonial Roots of Democracy. American democracy was founded on the principles of The Great Law of Peace founded by The Haudenosaunne People (Iroquois) in the Northeast. Read more.

2.  Watch 1492 set the record straight about Columbus and the Doctrine of Discovery.

3.   Learn about Native America's endangered languages and what is being done to revitalize them. Send an E-postcard in Euchee! Visit ourmothertounges.org
Engage your friends and family and raise awareness about endangered languages by sending an e-postcard with a Native language audio greeting.

Support the community of Santa Cruz Barillas, Guatemala in their opposition to a hydroelectric dam being built on their sacred river. Send an email today!

5.  Support our Guatemala-Belize exchange between Indigenous radio producers on the right to Free, Prior and Informed Consent.
Make a gift today. Our work is only possible because of people like you, who believe in and support our mission to partner with Indigenous Peoples to defend their lands, languages, and cultures.

6. Spread the Word! One of the easiest and most effective things you can do is raise awareness about Indigenous Peoples. Forward, post this message on facebook, or tweet it!