SAVING OUR WAY OF LIFE IN ALASKA 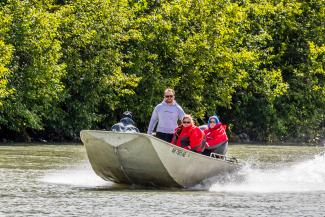 My earliest memory is of my father taking us all out in his fishing boat to a nearby beach to dig for cockles and clams while I wore my black leather jacket. These family outings would provide food throughout the year. We also gathered berries, beach asparagus, and seaweed. Medicinal herbs were made into salves and lotions to cure cuts, skin problems, and sickness. My family lives in Wrangell, Alaska, at the mouth of the mighty Stikine River: the fastest navigable river in North America, fed by the sacred headwaters in British Columbia. Moose, deer, and waterfowl are plentiful for hunting. Five different species of salmon (chinook, sockeye, coho, pink, and chum) return here to spawn every year. Growing up in Southeast Alaska with seven siblings meant living off the land. It’s our way of life.

My father, a Tlingit man, worked as a commercial fisherman in the summer and drove a pile driver in the winter. Money was scarce, but we never knew we were poor until we were much older, as the land and water gave us an abundance of food. We learned at an early age how to net herring, pluck ducks, and smoke fish, and all of our food was jarred or canned for the long winters. We were taught to take care of the land, and that it would take care of us.

My mother, Mae Dailey, was the granddaughter of Chief Shakes VII and was a full-blooded Tlingit. She was of the  Raven moiety and a member of the Kaach.adi clan. We are a matrilineal society, which means we follow our mother’s lineage. All Tlingits are of either Raven or Eagle moiety; traditionally, if you were of one moiety you would marry the other. My father, Marc Dailey, was an Eagle from the   Kik.sadi clan. They were married for 56 years until he passed in 1996 at the age of 77. My mother lived until 2002 and passed when she was 79.

Mother taught us the value of treasuring our Native foods and cooked the crab, salmon, and shrimp to perfection. She made jams and delicious desserts with the berries. Each spring, there would be the return of small candlefish, named hooligan, on the Stikine. These were caught in nets and distributed throughout the community.  Some were smoked, others fried, and yet others were rendered down for their fat content. This hooligan grease was used on a variety of foods such as potatoes and rice. Before we had electricity, the grease was used as fuel in hanging containers with wicks for light. Sharing food with the elders is prominent in our culture; when my father brought fish home, I would be the one to pack it up the hill to an elderly gentleman who would pay me a quarter for my effort.

There is an old saying in this part of the country: “When the tide is out, the table is set.” Now, our Stikine and other rivers flowing from British Columbia into Alaska face threats from large-scale mining in the headwaters and tributaries of these rivers. The cultural systems and knowledge of sustainability and respect are also at risk. Many of the communities are remote and rely on protection of these waters for our food security. These headwaters, which are sacred to us, have fed and nourished us since time immemorial. But others see them as “the Golden Triangle.” They see the land not as life-supporting, but as a source of gold and wealth to be exported elsewhere. Mining in the Canadian headwaters of the Stikine is on a collision course with our traditional values and sustenance, as one mine has recently become operational and several others are waiting in the wings. The short term gain of these mines is at odds with our long term survival. Mines and clean water are not compatible.

Our rivers feed our forest and our people. The Province of British Columbia has built infrastructure to support massive mining projects threatening the headwaters of our rivers.  Many of the Lakes of Poison (a.k.a. tailings storage facilities) left behind by these projects will need our careful consideration for centuries to come. For our way of life to have a future, big mining will need new ways for resource extraction. Business as usual cannot continue.

Living my entire life in Alaska has led me to work with the Southeast Alaska Indigenous Transboundary Commission (SEITC), a consortium of 15 Tribes in Southeast Alaska formed at a mining symposium on Prince of Wales Island in 2014, whose mission is to protect Tribal lands and waterways for future generations. The Commission is a network of sovereign Tribal Nations in southeast Alaska united in the struggle against the mining industry, which is damaging the environment of their homelands and polluting rivers that are vital to the communities.

Working with the support of a Keepers of the Earth Fund grant, we seek to unite First Nations and Indigenous communities on both sides of the border to establish transboundary watershed governance that will incorporate international water laws and conventions. The safeguarding of these watersheds is of the utmost importance for the communities’ health and economies, and the unification of sovereign Tribes is bringing a powerful voice to educate people on both sides of the border about the mining threats in these remote areas.

The conflict in the Alaska/British Columbia boundary waters region arose from the investment of billions of dollars by Province of British Columbia to build infrastructure to support a dozen open pit mines in the headwaters of the rivers that feed our forest and our people.  Two recently became operational, and several more have completed the permitting process, including what would be one of the largest open-pit mines in the world. British Columbia has a very poor record of environmental compliance and enforcement.  A 2016 audit of its environmental agency by the Auditor General found the permitting system incapable of any assurances of safety. The 2014 catastrophic failure of the so-called state of the art tailings dam at Mount Polley is a startling example. In addition, acid mine drainage has flowed into the Taku River watershed from the Tulsequah Chief mine and across the border unabated for over 50 years without redress. We rely on these rivers not only for food, but also for the survival of our cultures. These rivers, the Alsek, Taku, Stikine, and Unuk, are home to a vast diversity of wildlife and all 5 species of pacific salmon. Our people have thrived in this region for thousands of years.

The fishery and tourism resources dependent on the Transboundary Rivers provide economic stability to the entire Southeast Alaska panhandle. This region supplies a significant percentage of the world’s wild salmon to seafood markets. The Taku, Stikine, and Unuk River Watersheds account for $48 million in economic activity annually, along with 400 jobs for the Southeast region. With appropriate management, Southeast Alaska’s transboundary watersheds can generate economic benefits in perpetuity. One measure of that perpetual benefit, the present value of the 3 watersheds combined when considering benefits over the next 50 years, is over $1.2 billion.

This year we met with First Nations members and agreed on a unity statement with representation of over 100 Indigenous Tribes from both sides of the border. We seek to establish transboundary diplomacy with federal, state, provincial, industry, and other stakeholders. Through mutual agreements we will establish ecosystem-wide protections and equitable benefits in the form of ‘soft laws’ to govern action in the shared watersheds. The only way we are going to win the fight against this threat to our way of life is to stand together.

—Elizabeth (Tis) Peterman was born and raised in Wrangell, Alaska and is a direct descendant of Chief Shakes VII. She is currently the coordinator for the Southeast Alaska Indigenous Transboundary Commission.

“Indigenous leaders met to discuss mutual interests concerning adverse impacts and potential harms of extractive industries incompatible with sustainable development in rivers/watersheds in Alaska, Canada, and transboundary ecosystems. These discussions uphold the importance of traditional ecological knowledge necessary to effectively and meaningfully develop environmental plans and programs that promote stewardship and protect lands and waters that sustain life. These sessions affirm ancestral relationships among Indigenous governments in the U.S.A.  and Canada. We commit to exercising government-to-government relationships between Indigenous governments and organizations essential to protect our respective communities and citizens.  We agree to work together in the future on our common interests incorporating Free, Prior and Informed Consent principles under the United Nations Declaration on the Rights of Indigenous Peoples.”