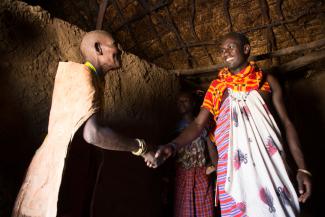 On April 16, 2013, Isaya Lukumay (Maasai), president and founder of The Warriors Organization (TWO), was one of the thousands of runners participating in the Boston Marathon. A corporate sponsor pledged funds necessary to build a two-room schoolhouse in his home village of Eluai, Tanzania, but since then has failed to deliver on the promise. Several weeks after the marathon, Lukumay spoke with TWO board member Michele Christle about the tragic events.

The night before the marathon I was very excited. We eat a lot of food in Maasailand, but not as much as I ate that night. I had a big pasta dinner with roasted spaghetti and a Tanzanian sauce with tomato and onions. The next morning I woke up early. I felt powerful and confident. My wife dropped me off. I talked with the faster runners. I was talking to Lelisa Desisa Benti, the guy who won. I asked him about his experience running marathons. “It’s my work,” he said, “It’s what I get paid for. I have to win. If I don’t, I don’t make money.”

The gun went off and the race began. I was in the third wave of runners. It was great to see everybody running together. [After] I had already run a half marathon, I felt miserable. I didn’t stop though, because I knew if I stopped I might not keep going. I was telling myself, You have to be strong, finish, make your goal. I thought of my siblings and knew I couldn’t stop.

When I was in back in Tanzania in January, I saw my younger sisters trying to get to school. They don’t know how to read or write, we don’t have a real teacher there. The teachers they bring to the schools on Maasailand are from the city. They don’t speak Maa, only Swahili. They are teaching five year olds who can’t even speak Swahili. In Tanzania, every year of school counts. If you fail the exam at the end of primary school, you are never allowed another opportunity to pass into secondary school. These kids have never seen a book or a conventional classroom. They can’t
understand the teacher. After three years of school, they can only say “jambo” and “safari.”

Thinking about how many would benefit from the money we were raising motivated me. I had a picture in my head of the children in Eluai, happy, studying, empowered. This was a big opportunity for me to support these kids. I wasn’t thinking about running, I was thinking about opportunity.

I finished Heartbreak Hill and around Copley Square, I was three miles from the finish line. I said to one guy who was slowing down, “Keep going, don’t stop. You’re almost there!” I kept going and I crossed the finish line. I couldn’t stop thinking about how great it was, just seeing what I had done and how it would affect my community back in Tanzania. I walked around for about 15 minutes, trying to get my stuff and find my wife.

I was about 100 feet from the finish line when I saw these two big clouds of smoke and heard a big sound. It looked like something had collapsed. Five seconds later, there was another boom. I thought, holy crap, what am I seeing? I thought it was the trains underground, that the land was collapsing. The whole area was becoming a mess. Everything was mixed up. My wife was supposed to be at the finish line, in the family area. She’s there waiting for me, I’m thinking. I’m freaking out. The place is full of people. Is this real or am I going crazy? I have seen bombs explode on TV, but not in real life. I was shocked. I couldn’t think. For five minutes, I couldn’t move.

Everything was black with smoke. I was so scared that something had happened to my wife. Finally, out of the crowd, she came running to me, crying. I was trying not to go crazy. It took us 45 minutes to get out of there. It was a hell of a day. It was a good day until the bomb. After that, everything changed. Everything. Later, I was sitting on the sofa, watching the coverage. I saw the guy I had told to keep going when we were still three miles from the finish line. When the explosions went off, he fell two feet from the finish line. I’m looking at him, thinking, I talked to him! I was shocked, shaking. He must have stopped and walked. My mind was exhausted from trying to calm down.

It took a long time be able to think about this on a personal level. And now what I’m thinking about is the impact these events have had on my community. When something bad happens, you just have to start moving again. You don’t look back. When you face challenges like this, you need to keep moving. If I didn’t have something to believe in, I wouldn’t have moved for a long time.
When I found out that my corporate sponsor didn’t follow through on their promises, it was very disappointing. People here don’t know much about the situation in Tanzania. It takes a long time to fully understand when you haven’t been there yourself. If you eat with us, if you see the brown water we have to drink, you know us and this helps people to follow through with funds. If people know what’s really going on, they take it seriously.

At first I wanted to go back to Tanzania, but I didn’t because I don’t believe in quitting. I believe in confidence. I was running to accomplish something, thinking that there would be money raised. All of the time I was training for the marathon, and when I was running it, I had dreams of what this would mean for my community. To have survived that day and not to have anything to give the children in my village is difficult. I wouldn’t have run the marathon if I had known that I was risking my life and that no money was raised.

My mom used to tell me a story about a strong warrior. He and his fellow warriors were in conflict with another tribe over cattle. He took 105 warriors with him to take back their cattle. They didn’t expect any trouble but the other tribe attacked them. They were all fighting and they lost 50 people. The warrior was going crazy because all they were supposed to care about was the cattle and everyone had gotten consumed with fighting. Then he got shot too, and fell down. All the warriors huddled around him. “We came here for the cows, we did not come here to fight. We have the cows. Now we just need to get back home together,” he said. And they went back with the cows. I always think about that story.

I ran the marathon to raise money for the school in my village. I didn’t know that the bomb was going to happen or that we would not get the funding. But I know that great warriors never give up; they move on past whatever bad things come to them. I will keep fighting.

For more information about The Warriors Organization, visit: www.facebook.com/TheWarriorsOrganization or www.warriorsorganization.org.