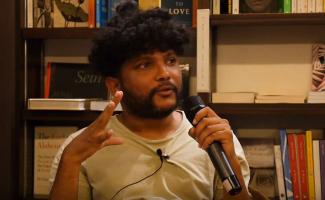 I’m a Khoe language and cultural activist based in ‘||Hui !Gais’, which is the original name of Cape Town, South Africa. Language is critical to how a community sees themselves and the world they inhabit. Their understanding of the world is formed by the thousands of words and what remains when those words are taken. This is the case with our Khoe people in South Africa, a people robbed of our Khoe languages with no restorative attempts made post-1994 to acknowledge our violent language loss. As Khoe people, we cannot be passive about this evil of being ignored.

From December 1–8, 2018, we held the first ever Khoi languages week. The purpose of the week was to create awareness about Khoe languages, which, in 2019, are still not recognized as official languages. Despite 25 years into democracy in South Africa, we are still a people without a recognized language, culture, or identity. Our children are still not able to be taught our Khoe languages. This is really sad in a country that speaks to having the most liberal constitutions and that is regarded as one that many countries model themselves on, yet our Khoe people are still invisible. We are not seen in public discourse, we are not spoken about; they pretend that we do not exist. Part of finding ourselves and our heritage is to reclaim the languages spoken here.

Doing this work as an openly gay man, I have at times been met with homophobic prejudice and outright hostility. To my shock, considering that we come from a community of Khoekhoe, or people who respected humanity, the individual, and diversity, and in a space where I thought I would find acceptance, I have met some ignorant minds. Acknowledging that 366 years of colonization and Christian missionaries have disrupted and destroyed the fabric of our existence and who we are today is but a product of this. I have heard of gay men, Khoe and settlers, who were drowned during colonial times at the Cape. This is something that still needs research, exploring, and acknowledgement.

I hear that certain groups have chosen to not support my work. But this work matters to me and I will continue to push open these doors. South Africa has one of the best constitutions in the world, and yet LGBTQIA+ people are still raped, murdered, and subject to violence in poor and working class communities. If you have money, you stand a better chance of your constitutional rights being protected. I would like to believe that I am taken seriously, however, I believe that my sexuality has impacted how valid my work is and the amount of support I get. In our communities, Christianity still plays a huge role in how LGBTQIA+ are viewed. Being working class and poor, I am taken even less seriously in addition to my sexuality.

It is important that the language of my forefathers be spoken, especially in a country with 11 official languages, none of them being the language of the Indigenous people of southern Africa. We recently piloted a project at Hillwood Primary School where I facilitate Khoekhoegowab courses right here in Cape Town for primary school kids. My short term goal as a language activist is to raise money to enable my work to have more impact. I do this work with very little support from our own, though I acknowledge the few who provide some financial support for this work. It will probably take two generations for people to see the importance of this work. We can only hope that our languages will survive two generations.