This Is Our Home: Human Rights in the Chittagong Hill Tracts 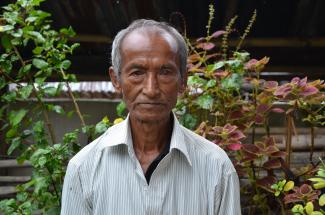 On August 7, 2014, the government of Bangladesh issued a decree to all officials and Peoples, Sultana Kamal, co-chairperson of the Chittagong Hill Tracts Commission, said, “We despise it. We reject it, and for that if we have to face any penalty, we are ready to accept. Stopping eviction of Indigenous people and their human rights protection is the role of the state.” Forbidding the use of the word, and hence the recognition the existence of Adivasis, is the latest assault on the rights of Indigenous Peoples in Bangladesh.

Indigenous communities have been under attack in the Chittagong Hill Tracts (CHT) for as long as I can remember. When I was a boy, my family and other members of my community were exiled to India as refugees after Bengali soldiers burned my village to the ground. CHT, a mountainous region of over 5,000 square miles, lies in the southeastern corner of Bangladesh bordering the Indian states of Tripura and Mizoram to the north, and Myanmar to the east. Thirteen journalists to stop using the term Adivasi, or “Indigenous.” In response to this latest attack on the rights of Bangladesh’s Indigenous diverse Indigenous groups, collectively known as Jumma or Pahari, call this place home. The Indigenous people of CHT differ markedly from the Bengali majority of the country with respect to ethnicity, religion, language, land cultivation methods, culture, and customs.

The region’s picturesque hills and tranquil lakes belie an existence for Indigenous people that for the past 40 years has been anything but peaceful. Massive and systematic human rights violations against the Jumma people have been committed by Bangladeshi security forces and armed mobs of settlers. The Jumma have been murdered, crippled, raped, tortured, imprisoned, and deprived of their homes and means of livelihood. Their tribal villages were brutally attacked, places of worship burnt down, and homes set on fire.

Since 1976, the Bangladesh military and the armed mobs have committed at least 13 massacres in the CHT. These massacres were covertly and systematically executed by the Bangladesh military, often in collaboration with armed Bengali citizens, to wipe out the Indigenous people from their homeland and to make room for over half a million Bengali Muslim settlers. As a result of these atrocities, tens of thousands of Indigenous people have fled to India. International organizations including the United Nations High Commission on Human Rights, the European Commission, the United States Congress, and Amnesty International, among others, have strongly condemned these atrocities in several reports.

Ever since Bangladesh gained independence in 1971, the government has failed to recognize the human rights of Indigenous people or their rights to ancestral lands. Jana Samhati Samiti, a Jumma political party with a military wing, was formed in response to the consistent attacks on their communities. In 1997 an agreement known as the CHT Accord is supposed to have ended the decades-long fierce armed conflict between the Jumma and the government. The Accord was hailed and welcomed not only by the Jumma and democratic and progressive political parties of Bangladesh, but also by the United Nations, European Union, and many other democratic governments of the world. The peace accord guaranteed the rights of Indigenous Peoples to their ancestral lands in the Chittagong Hill Tracts. Yet today, 17 years later, Adivasis continue to be forcibly evicted from the region.

According to the 1997 peace accord, the Bangladesh government would withdraw all military camps and security forces, except for the police and border security, from the region. But as of 2014, the CHT and the tribal people within it are still underfull military occupation; a mere 29 of about 500 military camps in the CHT have reportedly been withdrawn. One-third of the entire Bangladesh army is deployed in the area, which accounts for just one-tenth of the total territory of the country and where Indigenous people account for less than one percent of the entire population.

Military and paramilitary forces have an all-encompassing presence in the CHT, as army garrisons, numerous base camps, and checkpoints are visible everywhere. Military camps are on almost every hilltop along the main roads. Over the last two decades these security forces have deliberately massacred innocent Indigenous Jumma people, yet the military remains the pervasive authority in the entire region. More critically, the Bangladesh government has granted blanket impunity to the military for such flagrant human rights abuses. This impunity has been the single most important factor encouraging human rights abuses in the region, which are committed in the name of security and stability.

In the 1980s and ‘90s, over 500,000 Bengali Muslims were settled in the CHT after the Jumma had fled to India and other parts of the country in fear for their lives. Since the signing of the 1997 peace treaty, around 43,000 Jumma refugees have returned from India. But more than 50 percent of those who returned did not get back their lands and homesteads, and a large majority of refugees continue to live in the makeshift camps or in the houses of relatives. In addition, about 65,000 Jumma have been internally displaced, forcibly resettled by the army into strategic hamlets after their villages were burned. They cannot get back to their lands, which are occupied by imported settlers and security forces. The Bangladesh government, in gross violation of the peace treaty, has refused to return lands to the Jumma refugees and internally displaced people of the CHT.

Jumma women have become the greatest casualty in the ethnic conflict in Bangladesh. Bangladeshi security personnel have been systematically raping them since the conflict started in the mid-1970s as a deliberate tactic to destroy or damage the Jumma nation. Women are targeted for two objectives: as members of the “enemy” and as females. By raping a woman, the oppressor does not just aim to hurt her personally, he also tramples and humiliates the identity of the Jumma people as a whole.

According to the Hill Women’s Federation there were 167 reported cases of rape between January 2011 and June 2012, and many more between 2012 and 2014. The organization maintains that there have been many others, but due to social taboos and fear of reprisals, the victims or their families do not come forward to report these crimes. Jumma women are not bound by the same cultural and religious restrictions that impose on the freedom of movement of Muslim women. These cultural differences, combined with the pervasive military presence and increasingly dominant Muslim culture in the CHT, have made Jumma women more exposed to sexual attacks and harassment.

The CHT Accord has failed to safeguard the survival of the Jumma people. Not only has the Bangladesh government failed to demonstrate a sincere desire to solve the ethnic conflict, it has arguably worsened problem. The treaty does not address the fundamental problems of the Bangladeshi settlers and the militarization of the CHT; it rather legalizes them. Violence in the CHT has not gained the international attention it deserves. Everyday our girls are raped, our men killed, our homes burned down by mobs of settlers, and our land stolen as we become homeless. These government-sanctioned acts are ignored by international agencies and funders who turn a blind eye. Travel in the region is extremely restricted, making it difficult, if not impossible, for journalists to cover the ongoing abuses. Doctors are reportedly pressured not to report evidence of rape. The strategies of stalling and providing misinformation in order to protect members of the military accused of these crimes is all too commonly—and effectively—deployed. For human rights atrocities committed against the Adivasis of the Chittagong Hill Tracts, no one is brought to justice. What is left but for Indigenous people to flee across the border to Tripura, India?