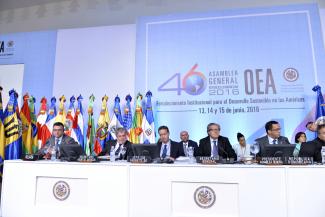 The General Assembly of the Organization of American States (OAS), during its 46th regular session from June 13–15, 2016 in Santo Domingo, Dominican Republic, adopted the American Declaration on the Rights of Indigenous Peoples after a lengthy and complex negotiation process between member states and representatives of multiple Indigenous Peoples of the Americas. This resolution was adopted by consensus during the third plenary session by the 35 nations constituting the OAS. Delegations from the United States and Canada expressed their general reservations, and the Colombian delegation announced that it would retract from consensus on Articles XXIII No. 2, XXIX No. 4, and XXX No. 5. Their delegation also presented three “interpretative notes” for several articles.

The negotiation process for the American Declaration began in 1989 when the General Assembly of the OAS requested that the Inter-American Commission of Human Rights (IACHR) prepare a legal instrument on the rights of Indigenous Peoples for adoption in 1992. On February 27, 1997, the IACHR approved the Draft American Declaration on the Rights of Indigenous Peoples, which was presented for consideration to the Permanent Council of the OAS. On June 7, 1999, the OAS General Assembly established a Working Group of the Permanent Council to consider and analyze the draft declaration, inviting the group to “contemplate the proper participation of representatives of Indigenous communities in their work with the intention that their observations and suggestions can be taken into consideration.” Under this mechanism, from 2003 to 2016, 19 meetings of negotiations have taken place, through which consensus has been reached on the several articles of the Declaration.

The American Declaration discusses a set of rights that Indigenous Peoples in the Americas hold. It consists of 14 preambles and 41 articles organized in 6 sections: Indigenous Peoples; Sphere of Application and Reach; Human Rights and Collective Rights; Cultural Identity; Association and Political Rights; Social, Economic and Property Rights; and one section on General Provisions. Article III serves as the cornerstone, reading: “The Indigenous Peoples have a right to self-determination. In light of this right they determine freely their political  position and manage their economic, social and cultural development.” This statement is in line with what has been established on Article 3 of the UN Declaration on the Rights of Indigenous Peoples, and in Article 1 of the International Covenant on Economic, Social and Cultural Rights.

Article III was hotly debated due to its great importance for the historical debt to Indigenous Peoples and the complexity of the interpretation on the part of States. From the start, it was the intention of certain State delegations to limit the acknowledgment and exercise of the right to self-determination “within their States” or to define them as “internal” rights, which undermines the current improvements on international law. It is important to state that in the 19th Meeting of Negotiations that took place in Washington, D.C. from May 17-19, 2016, the State delegations accepted the text of Article III as a way to secure the provision for “territorial integrity and the political unity of the states,” which is established in section 1 of Article 46 of the UN Declaration on the Rights of Indigenous Peoples.

Regarding the placement of the article discussing “territorial integrity and the political unity of the States,” Indigenous representatives proposed its inclusion in the General Provisions section. The Argentinean delegation, with the support of other nations, clearly stated that they would accept Article III as long as the said provision was included in Article IV. In its statement, the Argentinean delegation stressed that it wished to avoid a “malicious interpretation” of the right to self-determination, taking into account their current political situation on the Malvinas Islands. Therefore, with the intention of avoiding any limitation or restrictive definitions to the right of self-determination, the reference was accepted in Article IV, after Article III, which was seen as a balanced solution to the positions taken both by States and Indigenous Peoples.

Section 5 of Article XXV stirred intense discussions during the last phase of the Meeting of Negotiations, as this section establishes that “Indigenous Peoples have the right to legal recognition of their customary, traditional and particular property, possession or dominion of their lands, territories and resources according to the legal system of each state and relevant international instruments,” and that “the States shall establish the appropriate and special regimens for the strengthening and effective demarcation or titling.” The debate focused on the proposal from certain States to include a specific reference to the legal systems of each State, due to the fact that such systems tend to limit the acknowledgment and exercise of the rights of Indigenous Peoples to their lands, territories, and resources.

Incorporating the reference to relevant international instruments was critical to the achievement of a balanced agreement. Now, when a process for legal recognition to Indigenous ownership of lands, territories, and resources takes place in a national context, international law will be available as a resource, including the UN Declaration, ILO Convention 169, and relevant climate change agreements, among others. References—both to a State’s legal system and to relevant international legal instruments—permit that the interests and legitimate aspirations of all parties are considered fully and respectfully.

Another aspect that strengthens the American Declaration is the right to Free, Prior and Informed Consent (FPIC). On this point, section 2 of Article XXIII establishes that “States will celebrate consultations and will cooperate in good faith with Indigenous Peoples through their representing institutions before adopting and applying legislative and administrative measures that affect them, in order to obtain their Free, Prior and Informed Consent.” Section 4 of Article XXIX, which references the right to development, states that Indigenous Peoples must be consulted “…before approving any project that impacts their lands or territories and other resources, in particular with relation to the development, usage or exploitation of mining and water resources or another type.”

Considering the great diversity of Indigenous Peoples of the Americas, this newly created regional legal instrument will strengthen and consolidate the process of acknowledgement of the rights of Indigenous Peoples in international law, particularly within the American Human Rights system. In this regard, the American Declaration will become a legal instrument of great applicability, as Indigenous Peoples have previously resorted to the Inter-American Commission on Human Rights to secure the protection of their fundamental rights. The adoption of the American Declaration also serves as a positive reminder in moments where conversations of the deterioration of this institution and body are taking place. The challenge now is to achieve its effective implementation in the context of the member states of the OAS, and in the particular and unique situations of the Indigenous Peoples of the Americas. As international laws on human rights continue their progressive development, we must recognize the importance of the creation of an American Convention on the Rights of Indigenous Peoples to complete the circle of acknowledgement and recognition that our societies demand.

— Adelfo Regino Montes is a Mixe lawyer from Mexico currently working for Servicios del Pueblo Mixe and was active in the negotiations.