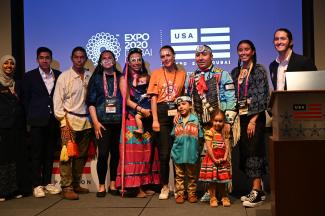 Wikipedia now has an extensive list of the “terminal speaker,” the last person to speak now-silenced languages. This colonial blotter of lost languages appears as if buried in the back pages of some global newspaper, one of the many artifacts of colonial devastation. The list is like a global mortality chart tracking the growing momentum of losses of hundreds of Indigenous languages around the world since the 1800s. In Canada and the United States alone, 19 languages were lost in the 19th Century; 68 were silenced in the 20th Century; and so far, 22 have been stifled in the 21st Century.


Those last speakers of Indigenous languages often become the focus of media that produce a long series of funeral dirges that typically drone on for years with the expectation of their impending demise. These news reports bemoan how tragic it is that an Indigenous language is being lost, despite the generations of carpet bombing deployed to destroy all Native languages north of Mexico. They make it appear that the only viable response is to get the language documented by academics before the last Elder passes—instead of getting knowledge of the spoken language back into the beloved community, so it can be carried forward for future generations.


These exercises in colonial melancholia disarm the natural impulse to grow new speakers. They disempower efforts for structural changes that move away from documentation as an end in itself and shift to direct community engagement that keeps the languages vibrant by growing new, young speakers through immersion methods. Adding new, young speakers to Indigenous language communities is the ultimate—and only—critical measure of the success of the International Decade of Indigenous Languages (2022–2032).


The good news is that the Decade is upon us. After attending the UN Permanent Forum on Indigenous Issues for 16 years calling for an International Year of Indigenous Languages, I am extremely gratified that the International Year (2019) has been parlayed into a UN Decade. It is up to us to use this opportunity to bring about real change. A profound shift is needed that prioritizes Indigenous communities and intentionally focuses on grassroots Indigenous language work. Where the money is being spent tells us everything about what is actually being valued, as there is virtually no value being placed on living Indigenous communities—even though their languages carry traditional knowledge that is essential for living sustainably on this planet. The present funding structure funnels over 99 percent toward studying and archiving Indigenous languages. Instead of academic studies, we need to fund Indigenous communities and work to keep languages alive within Indigenous communities. (For a more complete discussion, see Grounds, “The Legacy of Hunter-Gatherers at the American Philosophical Society,” in Indigenous Languages and the Promise of Archives, ed. Adrianna Link, Abigail Shelton, & Patrick Spero, 2021.) 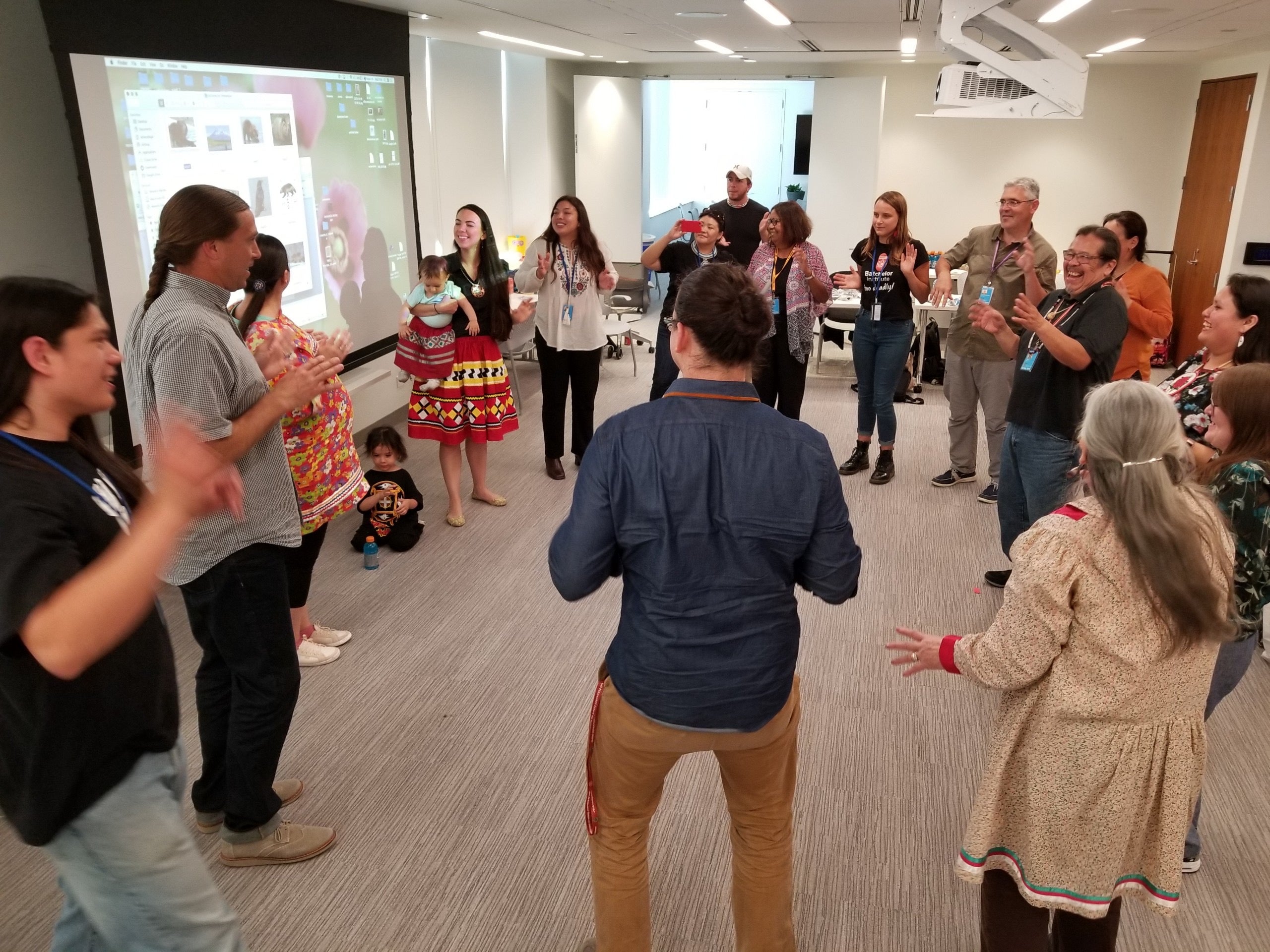 This Decade offers new opportunities, but does not come with designated funding from the United Nations. We need to seize the moment and claim the Decade to pursue our most urgent language goals and create a positive synergy between all stakeholders. The following are target outcomes to bring support to grassroots Indigenous communities in our language revitalization and reclamation efforts:


ReIndigenize. Develop new and strengthened partnerships between Indigenous Peoples across the Indigenous world to counterbalance the colonial structures already dominant across the entire space of Indigenous languages. We must teach and learn our languages by using our own languages through immersion instead of relying on colonial languages to help ensure the transmission of the original worldview. We need to support and learn from one another through knowledge sharing around best practices and capacity building for local language communities. We can amplify success stories from small language communities such as the quick turnaround for the Pertame language through their Master-Apprentice Program or the model used by the Yuchi Language Project to start raising babies in Yuchi as their first language again after four generations.


Decolonize. Intellectual colonialism through the study of Indigenous languages has remained fundamentally unchanged for the past 200 years, as clearly indicated by its complete domination of funds for language work at the expense of Indigenous communities. Such patterns need to be named so they can be properly addressed and corrective changes implemented to rebalance the colonial inequation.


Indig-agency. It is essential that Indigenous Peoples exercise their own agency during the Decade. Native Nations should declare their own Decade for their languages and plan the language progress for their children 10 years from now. Indigenous communities cannot afford to rely on academic, formal or governmental processes to effectively meet their urgent need to grow new young speakers in the community who will carry forward their cultures, worldview, ceremonies, ancient wisdom, and strategies for sustainable living on Mother Earth. The Decade launch celebration in Tahlequah, Oklahoma, during the first week of January 2022 is an example of prioritizing Indigenous grassroots voices and will be available for online participation.


Grassroots Funding Support. While Indigenous communities need to establish their own agency regarding their revitalization activities, there is still a need for funding to help the process of effective revitalization. Billions of dollars were expended on such projects as boarding schools with the explicit intention of destroying Indigenous languages. That is, we have had a great deal of help arriving in the present predicament and we will need that same level of help to restore our languages within our communities. We recommend supporting grassroots community language work through programs such as the Indigenous-led Global Indigenous Languages Fund to ensure that funding supports growing new speakers at the community level.


50-50 Protocol. We call for a new protocol in funding Indigenous languages: for every dollar going to study, dissect, analyze, or archive our languages, there should be a dollar sent to Indigenous language communities to help them grow new speakers and keep their languages living within their own communities. It is indeed common practice for academic institutions to take 50 percent from a grant for administrative costs. In a similar fashion, Indigenous communities, as the bearers of the language should receive half of all funds going to study their language by outsiders.


Rematriation. We are calling for national legislation during the Decade modeled after the Native American Graves Protection and Repatriation Act (NAGPRA, 1990) in the United States that would focus specifically on Indigenous languages. This legislation could be styled as NALPRA, the Native American Languages Protection and Rematriation Act. It would require the return of the inalienable cultural heritage represented in our Indigenous languages materials. The enforcement would come from the same mechanism used in NAGPRA, that all scholars and institutions such as museums, libraries, and universities would have federal dollars withheld until proper rematriation had been completed by returning copies of all audio, video and written language materials to those Indigenous communities from which they had been taken.


UN Convention. An important goal for the Decade is to obtain the adoption of a Convention for the safeguarding and revitalization of endangered languages (modeled after the Convention for the Safeguarding of the Intangible Cultural Heritage). Such an agreement would be legally binding and provide a defense for all Indigenous languages as well as other minority languages that are threatened through legal discrimination, linguicidal policies and practices.


Triage. With extremely limited resources and a short time to work with remaining fluent Elders it is important to establish a system of triage that would prioritize those languages closest to the brink of being lost due to the relentless colonial assault. We want to revitalize as many languages as possible and give priority—though not exclusive focus—on those language communities that still have fluent Elder speakers to pass forward the fullness of the language and world view through breath-to-breath intergenerational communication.


Special Rapporteur. We call for the designation of a UN Special Rapporteur for Indigenous Languages to correspond to the thrust of the Decade since there are so many ongoing violations of Indigenous language rights as supported in the UN Declaration on the Rights of Indigenous Peoples, Articles 13, 14, and 16, as well as in the International Labor Organization (ILO) Convention 169.


Indigenous Leadership. We call for an Indigenous cofacilitator with deep experience in language revitalization to help organize and implement the operations of the Decade to be named in consultation with Indigenous Peoples. There is no substitute for having an Indigenous co-facilitator for the Decade under the mandate of the UN General Assembly.


Recognitions. It is important to formally recognize eminent Elders and youth language warriors as a way to highlight the important language work that is presently being done across the Indigenous world and to encourage further community-based efforts. A principle benefit of such awards is to capture the attention of global media and help highlight the challenges and successes of Indigenous language communities.


United States Rejoining UNESCO. We call on the Biden Administration to rejoin UNESCO in order to be able to better support efforts by Native Nations to revitalize their languages in the framework of the International Decade which is falls under the leadership of UNESCO as declared by the UN General Assembly.


— Richard A. Grounds, Ph.D. (Yuchi and Seminole) is Chair of the Global Indigenous Languages Caucus and Executive Director of the Yuchi Language Project.