Language, Community, and the Environment: ʔiisaak is Key 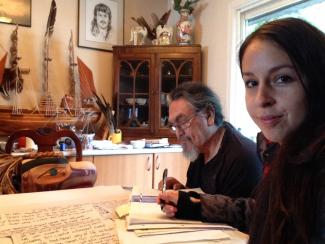 "When you think about where are you in your body, are you in your head? Is that the center of your being?” submits Gisele Maria Martin in an interview with Cultural Survival. “It feels like in English, the center of our being is our brain. There are a lot of sayings in English like, ‘That person has lost their mind!’ or ‘They’re out of their mind,’ or ‘Are you crazy? You’re out of your mind!’ But when I think about it in our language, it feels like the center of our being is in our heart. And that is a really different place to come from than our heads. We go with our hearts and listen with our hearts to the rest of the world.” A citizen of the Tla-o-qui-aht First Nation in west Vancouver Island, British Columbia, Canada, Martin is a language activist and storyteller working to maintain and pass on traditional knowledge in her community. She actively advocates for language revitalization and is working to become fluent in the Nuučaanuł (Nuu-chah-nulth) language under the tutelage of Tla-o-qui-aht elder, Levi Martin.

Parsing the difference in cognition and worldview between the Western languages she grew up speaking and the Nuučaanuł language of her people, Martin explains that language, community, and the environment are irrefutably intertwined in the Tla-o-qui-aht First Nation. “If I think about it in our language, community includes all the life forms that we are interconnected with: all the plants, the animals, and the spirits of the places. As I’ve been brought up in English and in French, I’ve been interested in a lot of things regarding our culture. But there have been a lot of times where I didn’t understand what I was trying to understand, like I’m looking at the world in black and white. As I’ve been learning our language, it’s like learning to see things in full color for the first time.”

While the non-Native communities in Tofino say the biggest issues they face are tsunami and earthquake preparation, Martin says that the Tla-o-qui-aht First Nation “has much more pressing emergencies happening right now—rashes of suicide, social problems, alcoholism, unemployment . . . it’s a colonial disaster that has been pretty relentless. I’m working with a local museum and right now they have a very colonial narrative about local history. [They] invited us to work with them and add Tla-o-qui-aht First Nation perspective to the museum. I was trying to wrestle with what we would put in there, because right now there’s nothing. A suggestion was, ‘just focus on early history.’ Early contact history?! It’s still now. ‘Early contact’ is still happening right now.” Furthermore, she says, “it is not just our issue. All the residents that are now living in our traditional territories, the non-Native community of Tofino; it’s an issue that they face as well, even though some of them might not know it. When we continue to use a language which is not ecologically literate, it has repercussions that affect all of us, and loss that affects all of us. For everyone here to live not just sustainably, but abundantly, we need to work that out.”

Martin describes Nuučaanuł as an ecological language, and believes that “protecting our language is really integral in protecting the lands and waters that make up our identities as First Nations people.” She explains, for example, how Indigenous knowledge can be used in climate change mitigation by simply preserving their language and the lessons that it tells. “Just upholding our language could have significant repercussions because it’s such a culturally and ecologically informed language,” she says. “Our word for ‘tree,’ for example, is suč̓as. At first I said, ‘okay, suč̓as is tree and tree is suč̓as.’ But no, the names of everything in our language describe what they do or how they’re connected to the rest of the world. The word suč̓as breaks down to the verb suč̓as, which is ‘to hold,’ and the suffix ʔas, meaning, ‘on the land or of the land.’ So the Nuučaanuł word for tree, suč̓as, literally is ‘landholder.’ Imagine if all the logging corporations changed the name for trees to ‘landholders’ in their documents, and talked about them and thought about them that way. They’d say, ‘oh yeah, we’re just going to cut down all these landholders here and hope there’s no landslides after!’ I find that over and over again, the teachings that are encoded in the words are huge.”

To Martin, the process for language revitalization is just as important as the path one chooses to take. “It’s just like when we walk down a trail in a forest: we can all walk down the same trail, but if we’re going at it with big tractor boots on we’re going to have a really different experience than if we’re going barefoot. And the impact is different for who is coming behind us also.” This consideration for process is largely influenced by ʔiisaak, one of the highest laws in the Tla-o-qui-aht culture. “ʔiisaak has been translated as meaning respect, but really it can be described and translated in many different ways. A more accurate way of translating it is ʔiisaak is to be observant, to appreciate, and to act accordingly. When we are observant, it is not just watching with our eyes and ears and taking down data in a notebook, but listening with our whole being, listening with our intuition, and our gut as well. Being observant, appreciating, and acting accordingly, those three things together is the practice of ʔiisaak. The most basic part of it is self-respect.”

Serving at various points as a language immersion camp facilitator, a Nuučaanuł Language class coordinator, and an outdoor field school cultural educator, Martin attends local schools to assist with Nuučaanuł language learning. Through these roles she has been exposed to the best, and worst, practices for language revitalization: “At some conferences I’ve been to, they’ve talked about how in school when kids learn language on computers it’s just repetitive: press a button and learn a word. [But] it doesn’t stick with them; they have no emotional connection to that word. The word just kind of goes in their head and goes out. Whereas, if you’re eating a fish head with your grandpa, and he puts one of the eyes on your plate and it’s also a medicine, and he says ‘qasii!’ you’re going to remember that a lot more, and the emotional feeling.”

Today Martin works with youth on Vancouver Island to encourage Nuučaanuł language and cultural learning. “To activate youth to be proud of their culture we have to include them,” she says. “One thing I want to say to them is don’t feel bad. We’ve survived. We’ve survived a lot; we’ve survived a relentless kind of colonial disaster. If you can’t speak your language right now, or if you feel like you can’t understand it, or you feel silly because you don’t know what red symbolizes in our culture, or why a canoe has a prow that looks like that, or anything about our culture that you don’t know, don’t ever feel bad. We are survivors of an incredible history and carriers of incredible history; you have your whole life to learn ahead of you. Just don’t give up and don’t ever feel bad for learning or needing to learn.”

For all of her advocacy efforts, Martin is not the only individual working to maintain the Nuu-chah-nulth language and Tla-o-qui-aht First Nations teachings; she emphasizes that she works alongside members of her community contributing in various ways to this preservation movement. “One of my cousins’ wives has homeschooled her kid and worked really hard to do a lot of Nuučaanuł language immersion in her homeschooling with him. Now she’s bringing out a lot of that work to our community and working on making an app for our language, which is amazing. There are other women working in preschools who are really helping with language revitalization as well. I often tell people, ‘this is my university! The land is my university!’ Some of the elders in my community, and even the kids, have taught me so much and guided me. They’re my teachers. The land itself is my university, and that’s ongoing."