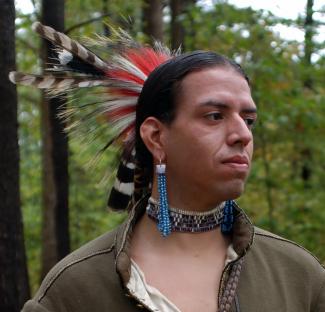 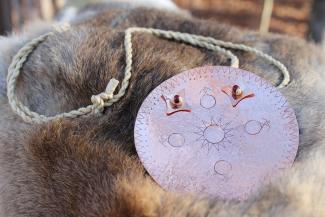 Aquinnah Wampanoag speaker, singer, artist, and actor Jonathan Perry has performed publically, including at Cultural Survival bazaars, for over 15 years, educating the public about Wampanoag history and culture and lecturing on Eastern Woodland art and traditions. A 25-year veteran of the performing arts, he is a member of the Wampanoag Nation Singers and Dancers and founding member of the Kingfisher Dance Troupe and the Iron River Singers. He also currently serves as councilman for his nation, the Wampanoag Tribe of Gay Head (Aquinnah) on Martha’s Vineyard, Massachusetts. Perry was selected by the Rhode Island State Council on the Arts for a Folk Arts Fellowship in 2015, and this year received the Rhode Island State Council on the Arts Master-Apprentice Grant.

Perry is grounded in the traditions of his ocean-going ancestors. “Many people have guided and taught me over the years to represent me and my people in a positive way. Some of those teachers are my mother, Patricia Perry, and my sister, Elizabeth Perry, the chief of my Nation when I was young, and many other people, too numerous to mention,” he says, adding that his family has always been musically inclined. “From my mother singing to me when I was a child, to my aunts and uncle who were classically trained singers and musicians, I have been exposed to the public performing profession almost my entire life. Around the age of nine, I started to practice our traditional Northeastern Woodland songs with the late Nanepashemet (Tony Pollard). I also spent quite a bit of time at cultural gatherings and celebrations participating, and eventually performing, these songs for our Native community.”

In addition to the performing arts, Perry is a traditional and contemporary Native artist working in many mediums, including metals for contemporary fine art and fashion design. He considers designs by examining the raw materials closely, drawing his images from the grain, hues, and patina of wood, stone, and copper. Perry enjoys using the materials and knowledge handed down from his ancestors to express his understanding of the natural world as well as the changes over time since Creation. He is greatly influenced by his time spent on the ocean, being from an island Native community. Perry’s pieces reflect balance within the natural world, incorporating stories, effigies, and symbology of Wampanoag traditions.

In a particularly defining moment for his art, Perry witnessed a basking whale off the cliffs of Aquinnah on his home island of Martha’s Vineyard. These whale images have since appeared in many of his pieces, and Perry continues to use the materials and knowledge handed down from his ancestors to express his understanding of the natural world and the change that it has experienced in the past 400 years. His three-dimensional artwork ranges in size from large, hand-carved dugout ocean vessels to stone effigy pipes and high-end copper jewelry.

Perry knows well the challenges that Indigenous artists faces today: “There is a lack of awareness of Indigenous art and culture in the United States, as well as a difficulty in accessing the international market. One of the most difficult things is access to materials that we once traditionally used, such as marine mammal parts, some varieties of trees that are now extinct, and access to certain types of minerals, metals, and stone. Environmental damage, earth management policies, and private land ownership have negatively affected Indigenous artists and cultural practices,” he says. In spite of these challenges, however, Perry perseveres. “Art plays a very important role for me because it allows me to express myself with Indigenous identity and to be appreciated by people of many backgrounds and societies around the globe. It allows me to tell the story of my family and my Nation and the continuance of our Indigenous people. Performing traditional songs for the public and Indigenous communities is very fulfilling, giving the community the ability to celebrate with songs that connect us to our ancestors and the land.”

Photo: Transitions copper pendant representing the stars that witness the Earth and all of Creation by Jonathan Perry.