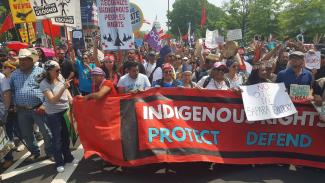 Indigenous Peoples at the front of the People’s Climate March joined by actor Leonardo DiCaprio. Photo by Nova Saigo.

On April 29, 2017, over 200,000 people took to the streets in Washington, D.C. for the People’s Climate March, demanding action on “Climate, Jobs, and Justice.” Amplifying the reality of the climate message, demonstrators chanted, sang, and played drums and other instruments on this Spring day that reached 91 degrees and tied a D.C. heat record. While the march was scheduled for before the November election, organizers saw this as a historic opportunity to show the current U.S. administration, and the world, that the movement is ready—not only to fight the fossil fuel industry, but to reject racism, hatred, and xenophobia. The march down Pennsylvania Avenue was led by youth and frontline communities, including a large and diverse contingent of Indigenous Peoples from around the world.

Like its 2014 predecessor, the climate march held in New York, the 2017 People’s Climate March included frontline local communities from D.C., women, members of the labor movement, immigrants, LGBTQI community, scientists, environmentalists, the elderly, people with disabilities, religious groups, anti-nuclear activists, and many others concerned about the critical state of a verifiably warming planet and future generations. They marched in various bloc contingents called “Protectors of Justice,” “Creators of Sanctuary,” “Builders of Democracy,” “Guardians of the Future,” “Defenders of Truth,” “Keepers of Faith,” “Reshapers of Power,” and “Many Struggles, One Home.”

“This is more than a march, it is a global movement to affect positive change,” said Roger Guayakan Hernandez, a Borikén Taíno representing the United Confederation of Taíno People at the march. Hernandez was a bus captain for one of two buses of Indigenous Peoples coming from New York City. Supported by the People’s Climate March organizers and the Indigenous People Bloc Committee, these buses were organized by the International Indian Treaty Council to assist local New York tri-state area Indigenous Peoples, as well as Indigenous delegates to the United Nations Permanent Forum on Indigenous Issues participating in the People’s Climate March. The New York buses were filled with local Tribal leaders like Sachem Robert “Hawk Storm” Birch of the Schaghticoke Nation, Permanent Forum delegates, and a group of Water Protectors from Standing Rock. Among the Water Protectors were LaDonna Brave Bull Allard, founder of the Sacred Stone Camp and Indigenous filmmaker, and Digital Smoke Signals founder Myron Dewey. Many other Indigenous Peoples attending the march also traveled by bus from various locations around the U.S. Members of the Cheyenne River Sioux Tribe, for example, traveled 1,536 miles from Eagle Bend, South Dakota.

The day’s activities began with a sunrise water ceremony led by Indigenous women at the Reflecting Pool across from the Capitol building. The ceremony opened with a welcome from Gabrielle Tayac of the local Indigenous Piscataway Nation and Tom Goldtooth of Indigenous Environmental Network, two of the morning event’s organizers. Spiritual leaders like Chief Arvol Looking Horse and elders Faith Spotted Eagle and Allard also shared words of welcome and prayers. With the Capitol Dome looming in the background, chiefs, elders, spokespeople, and Indigenous dignitaries like Tarcila Rivera, an expert member of the United Nations Permanent Forum on Indigenous Issues, were also present at the water ceremony, led by Ojibwe elder Sharon Day from Minnesota. A long line of attendees, including Indigenous Peoples and others, brought samples of water to be blessed, and the combined water prayers were released in unity from a copper pot into the nearby Potomac River.

“This is an amazing and spiritually significant moment for all the Indigenous Peoples gathered in solidarity here today,” commented Chief Damon Corrie, a Lokono Arawak from Barbados who came to the U.S. to attend the Permanent Forum with his daughter, Sabantho, 18, representing the Eagle Clan Arawaks. “To see so many delegates from so many different Indigenous communities is truly inspiring. My daughter and I both feel fortunate to be able to attend and march with so many other Indigenous frontline warriors.” Standing behind a large red banner identifying the Indigenous Peoples’ Bloc and the commitment of Indigenous Peoples to hold a “red line” in defense of their environment, homes, families, and future generations, Chief Corrie also expressed his concern about the impacts of climate change for Carib- bean Indigenous Peoples: “We are really seeing the effects of climate change back home in the islands. Our reefs are bleaching and hurricanes are getting more intense. Things are changing rapidly and it is serious.”

Nania Kodi, an Indigenous Nuba woman from the Sudan, agreed. “It was important for me to participate in the People’s Climate March because I felt the need to represent the Indigenous woman who contributes the least but gets affected the most by climate change,” she said, passionately noting that “climate change is not only about its effects on the availability of water and food security, but it also affects health via malnutrition and sexual reproductive health as well as security via physical and sexual abuse while women and girls go in search of water and food.”

The People’s Climate March coincided with the 100th day of the Trump presidency, and it was clear in the brightly colored slogans on banners and signs, as well as in the chants, that the 45th U.S. President and the actions of the current political majority party were a serious concern for the future of the entire planet. From those who stood in opposition to the Dakota Access Pipeline, to Indigenous Peoples from the Arctic who are concerned with oil drilling in their region, Indigenous marchers continuously remarked on the current administration’s destructive anti-environmental policies, which contribute to the global climate crisis and violate the rights of Indigenous Peoples.

As marchers passed the White House, powerful group chants such as “Dump Trump,” “Shame,” “Indigenous Peoples’ Rights,” “Climate Justice,” and “Mni Wiconi—Water is Life” were heard in the intense heat of the day. As Indigenous Peoples passed the White House, marchers following behind took part in a silent sit-in to recognize the damage already caused by the Trump administration and for those losing their lives to the climate crisis daily. These demonstrators, thousands of them, began tapping out a rhythm on their chests following the beat of drummers keeping time. According to march organizers, the heartbeat was meant not only to highlight the diversity of the various contingents, but to emphasize that no matter where people came from, their hearts beat as one in this march and beyond. “This was an incredible experience,” said Sachem Hawk Storm of the Schaghticoke First Nations of Connecticut. “Meeting so many Indigenous Peoples and hearing their frontline stories, I can see that what happens here in the U.S. really impacts others around the world. We need to continue to stand united.”

The People’s Climate March ended with a rally at the Washington Monument and included other activities, such as a local Pow Wow later in the evening. While thousands attended the rally, many other participants of the historic march made their way to their buses to begin their journey back to their various places of origin where the work will really begin. Back on one of the buses returning to New York City, 11-year-old Mainaku Borrero (Taíno/Tlingit), commented on the long, hot, but exciting day. “Climate change is real,” she said. Her 9-year-old sister, Kayaani, agreed, and added, “Water is life.”

Photo:Indigenous Peoples at the front of the People’s Climate March joined by actor Leonardo DiCaprio. Photo by Nova Saigo.