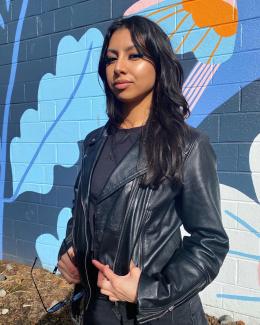 Shania Sontariakon/Sandoval-Cross, 26, is Kanien’kehá:ka (Mohawk) from Kahnawà:ke, Canada and Afro-Maya from Axaja, Guatemala. They were born and raised in unceded xʷməθkʷəy̓əm, Sḵwx̱wú7mesh, and Sel̓íl̓witulh territory by strong Mohawk matriarchs and political refugees with predominantly Latin American and diasporic Asian communities. They have been working with Indigenous youth for more than 10 years, dedicating their work to creating and maintaining safe spaces for Indigenous Two-Spirit and Queer youth. They currently reside in Vancouver, BC, and are pursuing a degree at the University of British Columbia in First Nations and Indigenous Studies. Cultural Survival’s Nati Garcia (Maya Mam) recently spoke with Sontariakon/Sandoval-Cross.

CS: How do you express your identity in your language and cultures?
Shania Sontariakon/Sandoval-Cross: When I’m with somebody who’s not from my communities or from a Queer community themselves who doesn’t identify as Queer, I use exclusively they/them pronouns. But when I’m with folks in my communities, I’m okay with she/they. I think there are different understandings of gender and sexuality that come along with the pronouns, so they change based on what’s happening.

In Spanish, there’s a lot happening in terms of gender inclusive language, like putting an ‘e’ at the end of things rather than an ‘o’ or an ‘a’. But when it comes to having to navigate that in terms of older generations, like with my grandmother, sometimes it’s not always safe because of laws and religious upbringings and patriarchy due to settler colonialism. When I’m in a situation where I know I have more privilege in terms of how I present as feminine, I tend to push those narratives in the ways that I speak. But sometimes you do feel like you’re compromising your own identities in order to be in certain cultural spaces and with certain folks. Sometimes I just have to go by ella and use all the feminine [conjugations].

CS: Tell us about your journey of discovering your identity.
SSC: In terms of being Kanien’kehá:ka (Mohawk), I was really lucky that being Queer was super accepted. A lot of my family are Queer, so it was never a subject of concern or being fearful of having to come out. But for my Afro-Maya family, who are here as political refugees, it’s scary for my dad to say, ‘I’m Black and I’m Indigenous.’ It’s always, ‘I am Guatemalan.’ For him, having dealt with his traumas and his PTSD through becoming a fundamentalist Christian, my Queerness was never something that was safe to talk about up until recently. I was 25 when I finally came out to him, and that was after about a decade of him seriously doing his own healing journey. The only grandparent that I have left is my dad’s mom. She’s thankfully very accepting, but she still hopes I’ll have a husband one day. And even though I told her that’s not likely, it’s not something that prevents us from having a relationship, thankfully. 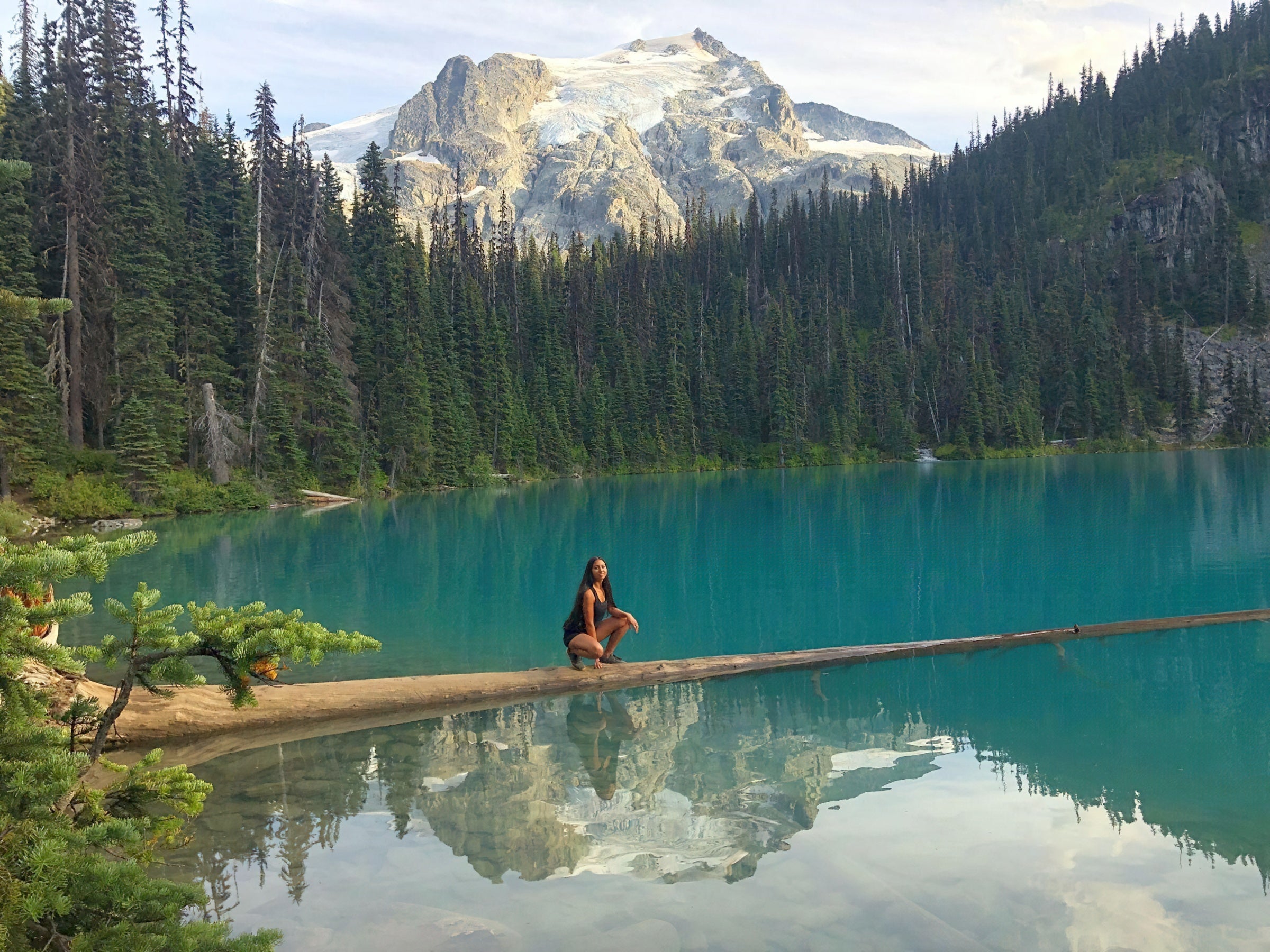 Shania Sontariakon/Sandoval-Cross enjoying the outdoors in a national park in Canada.

CS: What were some of the traditional practices of being Two-Spirit?
SSC: I do not carry my traditional language, Mam. My great-grandmother was the last one to speak it, [but] I did have my birthright and purpose read to me. The name that my Maya family calls me is Nia, which is a Mam word. When I introduce myself and I talk about my pronouns, you can use ‘she’ only if you understand my cultural context, because we do have those Two-Spirits, we have those energies. I am somebody who has a very high feminine energy. Christianity has taken a lot away from that, and having Spanish be my first language and the language that my family speaks, the understanding of how we carry those spirits and how they balance, everything gets lost. It affects our family structures and the ways that we can relate to one another and the ways that we live our lives. Colonialism complicated things so much. This is definitely something I wish I had better language for because I have experienced it thoroughly. The best way for me to talk about it is simply through the telling of my own experience. I was the first girl born into the family. In my identity and my names and my birthright and purpose, I am somebody who has a good balance, going into both [masculine and feminine] energies, even though the way that I present and lean into things is more within that feminine energy that we all hold.

CS: What documentation have you found about 2SLGBTQ+ Indigenous people from your Mohawk side?
SSC: Our Queer people have always been there, and there is definitely a resurgence happening now. There’s even a record of it when the Jesuits came into our communities. [There are] records where they talk about our Two-Spirit kin and how it was so unnatural to see a man be called a woman or two women living together. They specifically used Christianity to eradicate Queerness in our communities and saw that as a threat.

There are great Indigenous academics right now doing this work, like Leanne Simpson and Sarah Hunt. It’s affirming to see that work happen and to have those actual records coming out that we did exist. It’s like the settler colonialism and Christianity and that assimilation and indoctrination that has happened to our Nation, gaslighting us all, saying we didn’t have Queer people or Two-Spirit people. But we did. Here are the physical records of these colonizers coming in and making note of how weird it was to see this and how normal it was in our communities and the positions that our Two-Spirit folks held in community and in ceremony and in terms of being knowledge keepers and storytellers, holding all of that knowledge.

A lot of our communities have lost the words for what we call Two-Spirit folks because it wasn’t safe to use that language when you had your Indian agents watching you or you were in residential schools. A lot of the time, the Elders or the community members that still hold the language don’t use those words because of the trauma that they’ve gone through and the fear and the hurt that they associate with those words. They’ll talk around it, or they’ll mention it in a story, but they won’t give you the actual word for it. So, there’s a lot of work being done to figure out those words or even create new words. And that’s kind of beautiful, just the mere fact that we are not static people, and we get to determine what these terminologies are, how our language still is living and can evolve to include the spectrum of folks that make up our community.

CS: If you could create a word that reflects your culture and complements your identity, what would it be?
SSC: In terms of my own Mohawk language, I prefer ‘Queer’ because I think it encapsulates my gender and my sexuality and it doesn’t demand a binary definition. It allows for the natural fluidity of sexuality and gender. When I think of the kinds of roles I see presently for Queer Two-Spirit folks in our community, they really are the leaders, the warriors. In my language, the word for warrior means the burden of carrying the peace. I think that’s kind of who Queer folks are in a way, because we truly are putting our bodies on the line for that equity and for that reciprocity for our community as a whole, not just in terms of our sexual and gender identities. There’s a very nurturing and intelligent knowledgeable aspect to that identity as well. I see a lot of my fellow Queers in community carry those roles in really beautiful and humble ways. I wish that word existed, and I wish I had the language myself to be able to do that.

CS: Is there a message that you would like to share with our readers who may find themselves in a similar process as you?
SSC: Take your time and don’t feel like you have to know it all in order to be yourself or to allow yourself to take up space in community. You don’t have to be totally out if that’s not safe for you, because sometimes it’s not. Who you are is valid no matter what your life experience is, no matter how you identify. You will find a community wherever you are as long as you allow yourself to. [Your] lived experience is so valuable, and no matter what those hardships are, [you’re] going to inspire and uplift somebody else in their life.

All photos courtesy of Shania Sontariakon/Sandoval-Cross.