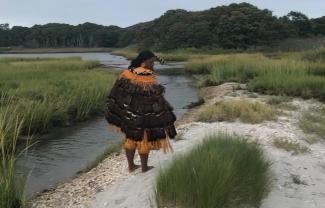 My given name is Sagkompanau Mishoon Netooeusqau, which translates to “I lead canoe I am Butterflywoman” in the Shinnecock and Montauk language. I am a member of the Shinnecock Nation and a descendant of the Montauk people of Long Island, New York. The foundation of my work has been based on the resurgence of the traditional canoe culture of the Northeast coastal Algonquin communities. Not only have I worked with Indigenous communities globally, I have worked to create stewardship between these communities and non-Indigenous communities. I have organized historically sacred paddles in the ancient waterways of the Northeastern seaboard to spread awareness of the roles Indigenous communities contribute to ocean sustainability internationally and at places like the Kennedy School of Government at Harvard University, the Earth Institute at Columbia Law School, and International Treaty Commission at the United Nations, and I have assessed many sites for signs of submerged cultural history for Atlantic Shores Cultural Core Analysis. I have dedicated my life for the betterment of not only my community, but for our Earth. I have invested energy in reviving and sustaining our traditional lifeways.

In the fall of 2016, I dedicated six months of my life to help the people at the Oceti Sakowin camp at Standing Rock prepare their camps for the winter. The Elders came to my campsite after standing on the banks of Cannonball River and emotionally watching cross-deputized authorities from non-Indigenous police departments show a presence on a sacred site to the Hunkpapa Peoples. They asked me to paddle around to see how these non-Indigenous police officers were getting to the sacred site. Using a donated canoe and paddles they had made with a 4x4 piece of wood, two other water protectors and I paddled in the Cannonball River as the Elders asked. While I was paddling, I looked into the faces of the Oceti Sakowin Peoples on the river banks. I witnessed a few swim with their horses as far as they could, but the water was too muddy and deep to make it across. I prayed that what was taking place that day somehow would bring them back to their ancient canoe ways. At that moment, I realized there was more to do than prepare camps for the winter for the Oceti Sakowin while being there. 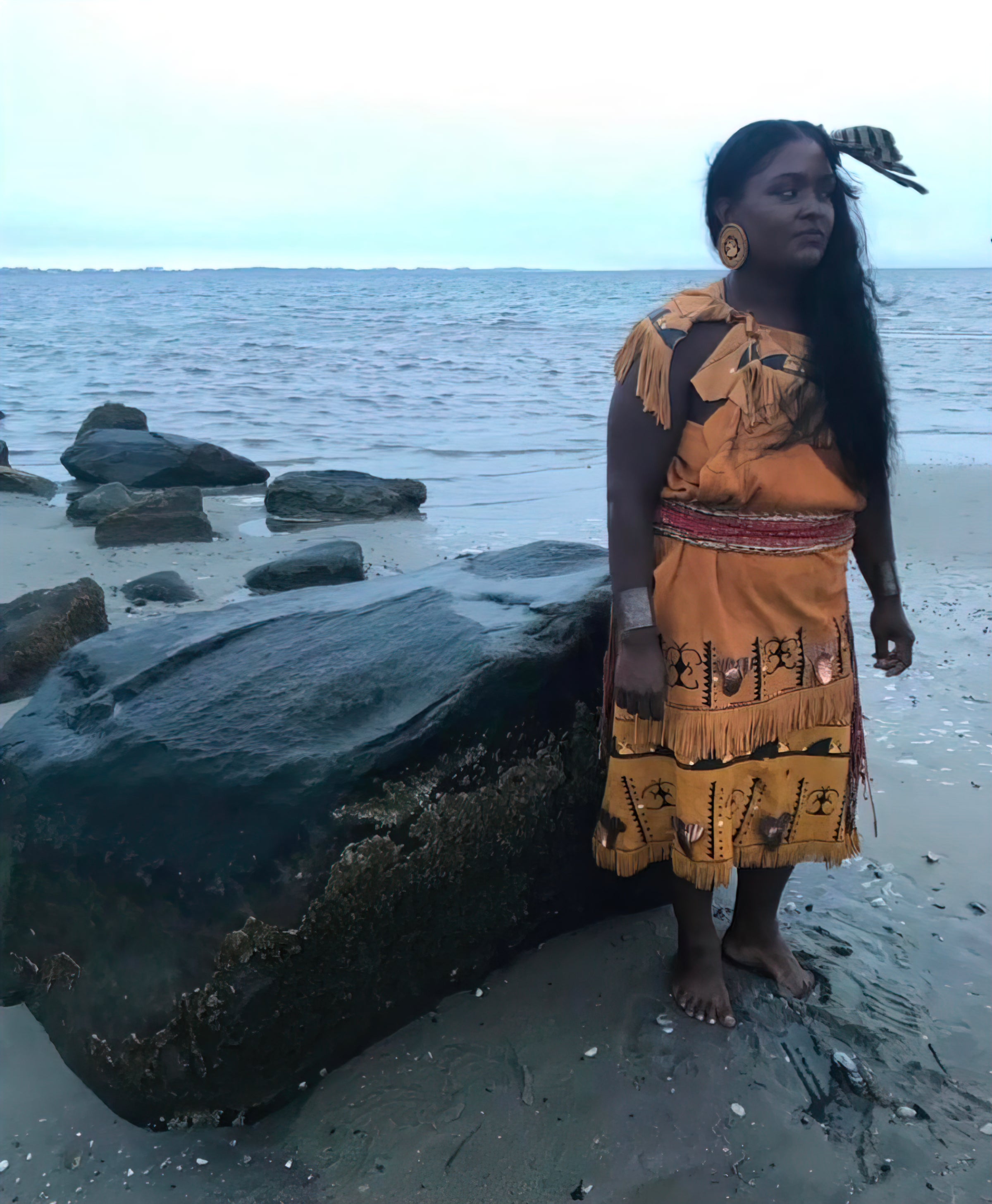 Chenae Bullock at the edge of the Atlantic Ocean on the shores of Shinnecock territory in Southampton Long Island, New York. Photo by Malachi McDonald (Sinti Chitto/Mississippi Choctaw).

No matter where I am in the world, near a pond, a lake, a bay, a river, an ocean, or even in the shower, I stop and give thanks for having access to clean water. I do not take it for granted. It is who I am as a Shinnecock woman, a woman of the stoney shores. We are now living in a world where it has become so scarce to have clean water. Since childhood, I have had a known respect for the elements of our Earth. I rode on the back of my mother while she swam far from the Shinnecock shorelines to the sandbars she had known to be there all of her life. As I grew older, I stood on the shores and watched her swim to where those sandbars once were. I watched my mother swim around looking for them, diving down to see how deep they could be, until she realized they were no longer there due to climate change and consistent dredging of the land underneath the water.

When I visit our waterways or hear about climate change, dredging in our ancient waterways, or Tribes fighting for access to their waterways, I think back to my mother swimming to the sandbars. Since that day, we have had more whales beach themselves on the shores. In our culture, we believe that when whales beach themselves, they are trying to communicate with us as they have known we are in need of ancient wisdom. These experiences have inspired me to help my people have a stronger presence in the water.

The word for medicine in my traditional language is “Moskehtu.” When I started my cultural and heritage consulting firm, Moskehtu Consulting, I wanted to name it something that would represent providing medicine to the Earth and to the people who are stewards of the Earth. I envisioned it being able to provide unique services to many clients who will take the medicine shared and pass it along throughout their organization or company, or even reposition themselves on how they see our Earth.

During the pandemic, I wrote an eBook titled “50 Plant Medicines: Indigenous Oral History and Perspective.” The intention of this book is to share my personal relationship with plants to inspire my readers to have their own personal relationships with the Indigenous plants where they live. After writing the book, I partnered with the Brooklyn Botanic Garden to curate an audio tour titled “Ohkehteau (Plants of the Earth): A Shinnecock Oral History.” This audio tour can be listened to along the walk at the Brooklyn Botanic Garden. It includes 15 of the native plants throughout their garden. The exhibition opened June 24, 2021, and will go through November 7, 2021. My goal for this exhibit is to help people connect to the Earth in a personal way. Our plants are in need of us to reconnect. With my personal oral history and perspective, it helps to give the plants a voice.

Recently, I partnered with the brand Teva as an Indigenous influencer for a panel called “Rematriate the Land: An Indigenous Perspective.” The other panelists included Angel Tadytin (Navajo), who is the founder of Adventurous Natives; Jolie Varela (Nuumu and Yokuts), who is the founder of Indigenous Women Hike; and Kari Rowe (Turtle Mountain Ojibwe, Oglala Lakota, Fort Peck), who is an Indigenous Visual Director and photographer. We provided our perspective on how we are reshaping conversations about Indigenous rights, identity, and the complexity of the Indigenous Peoples’ experience. It was such an honor to be alongside other women who are pioneering in the ecotourism space. 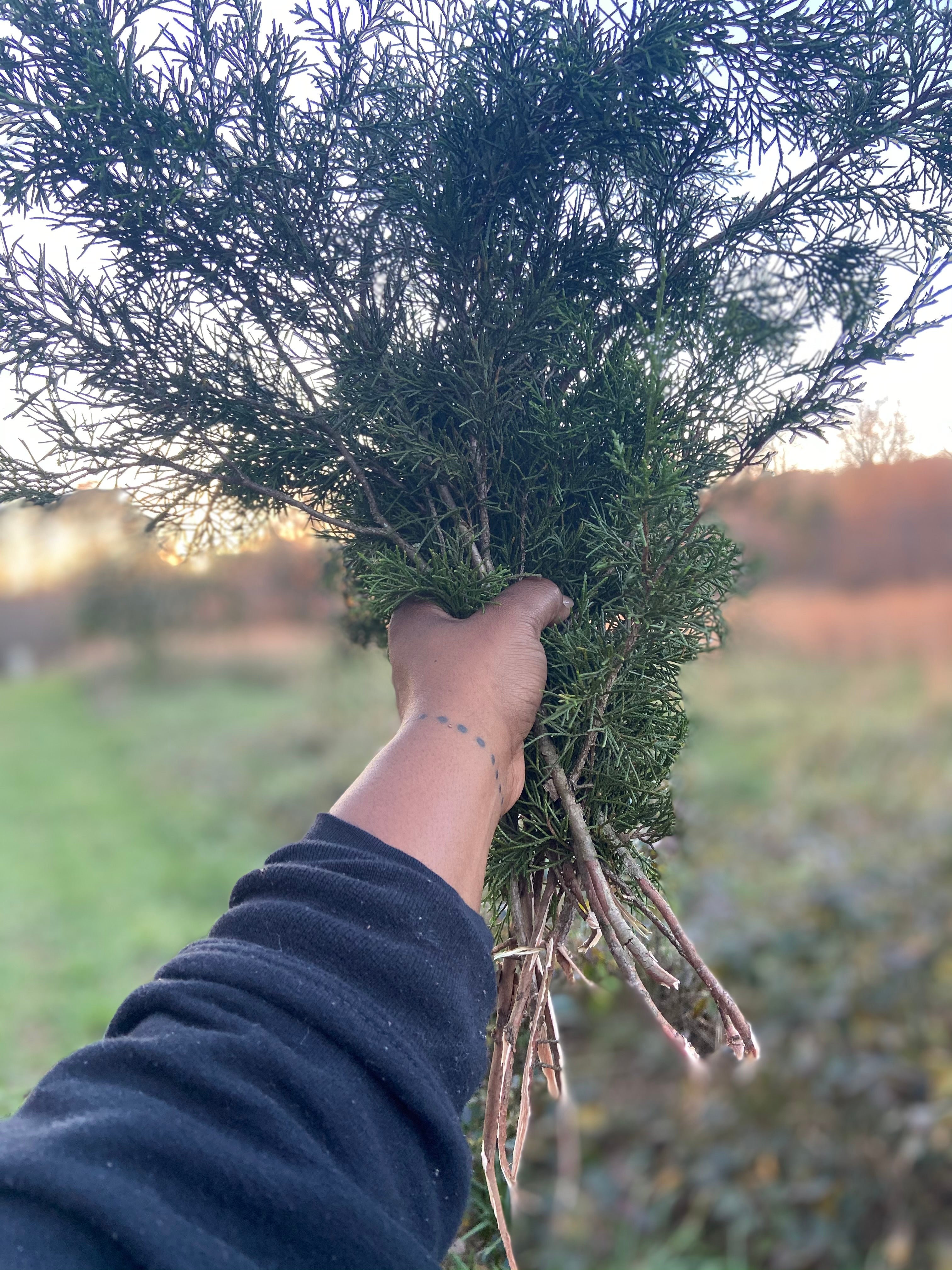 To further help people reconnect to the Earth, Moskehtu Consulting holds ecotourism events. As an Indigenous-owned and operated business, this helps to reclaim many of our traditional sites that we have been removed from for far too long. Indigenous history is so interconnected and rich throughout our waterways, and today, more than ever before, people are interested in learning not only more about our history, but our continued existence. Our perspectives and voices are vital for the survival of this Earth and to share our role with others in the environment. From plant walk tours to traditional pre-colonial outdoor living experiences, to canoe tours along our traditional waterways, there is no better way to experience this journey than being guided by Indigenous Peoples of these waterways and cultural landscapes.

Moskehtu Consulting’s ecotourism events are sustainable economic development frameworks that are uniquely suited for Indigenous communities. They are also a very simple way for people to invest into Indigenous communities, not only by supporting Indigenous Peoples, but by learning about how Indigenous Peoples hold tenure over a large percentage of the global biodiversity. The philosophy at Moskehtu Consulting is to help the land, water, and the connection people have to one another and the Earth. It’s been an awesome journey following this philosophy, and I hope to continue to partner with organizations, other businesses, and brands to reach all of humanity.

The interconnectedness that we have to the water and the land should always remind us of our top priority, which is to preserve and protect Mother Earth. I am aware that I will most likely always struggle in this world having been traditionally raised being connected to our Earth, specifically the geographical location of my DNA. In big cities in the United States like New York, Boston, Philadelphia, Washington D.C., and Atlanta, so many people are focused on how much money can be obtained to develop more destruction rather than strategically planning ways to combat climate change. There are so many places not too far from these cities that are still preserved. These cities sit on what is known as our homelands, just not with square boxes on them.

We need non-Indigenous peoples and institutions to go beyond land acknowledgment, to go beyond those square boxes, and learn about the traditions of the Peoples whose lands you are visiting and living on. There are so many ways to begin this journey. Our lands have trees who are as old as our Earth, and they have preserved so much wisdom. Their underground roots are interconnected through the entire world. Make connections with the local Indigenous people of your area and learn about the land from their oral history and perspective. Learn from those who carry this oral history and are still interconnected to our Earth.