Changing with the Climate in Finland: The Skolt Sámi's Path to Cultural Resilience 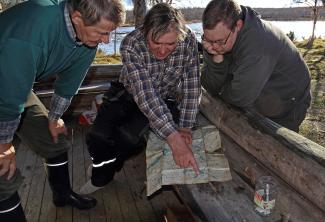 The radiant disk of the Arctic sun hangs in the mid-September sky above northern Finland like a ritual Sámi drum pinned to the wall inside a lavvu, a traditional Sámi dwelling. Its reflection floats gently on the still surface of Rautujärvi Lake, located over 400 kilometers above the Arctic Circle, near the Norwegian and Russian borders. Come November, according to traditional calendars refined by the Sámi over generations, the sunlight should be bouncing off the ice and snow of Sápmi, as the Sámi call their land. But the air and water currents over this landscape are no longer in sync with the ancestral calendars and the sun’s reflection may continue to float on the water several weeks longer, disrupting Sámi traditional winter travel, fishing, hunting, and reindeer herding activities.

The Skolt Sámi are a small but culturally and linguistically distinct group of the Eastern Sámi, considered to be one of the most traditional Sámi reindeer herding and fishermen groups. Historically, the traditional lands of the Skolt Sámi spanned the vast territory from Lake Inari eastward to Kola Bay, the present-day location of the Russian city of Murmansk. Today, most of the Skolts live in a small pocket of the northern Lapland region of Finland, north of Lake Inari. They were relocated here when their homelands were seized by the USSR after World War II and eventually settled in the village of Sevettijärvi, where they maintain their traditional practices and continue to speak the endangered Skolt language.

Before World War II, the Skolt families would move with their reindeer along wellworn migration routes from winter pastures to summer fishing grounds across the boreal region of the Kola Peninsula. The “snowmobile revolution” of the 1960s brought a rapid shift away from more traditional herding practices; herders began to rely increasingly on mechanized transport, such as snowmobiles, small airplanes, and helicopters for gathering dispersed reindeer into herds during corralling season. Despite the dramatic societal shifts brought about by relocation and, decades later, Finland’s integration into the European Union (EU) economy, reindeer herding has remained at the heart of the Skolt Sámi culture and way of life, permeating their food, songs, clothing, and art. Adapting to rapid change is nothing new to the Skolts, and they draw on this experience as they search for ways to navigate their newest challenge: climate change.

Lifeways Dependent on Local Resources
Reindeer meat is vital to the Skolts’ culture, helping ensure their food sovereignty in a changing landscape and climate, and budding birch leaves are an important spring food for reindeer craving fresh nutrients after a long winter diet of desiccated lichen. In 1966, the colder microclimate in the river valley saved the birch forest during an outbreak of the autumnal moth (Epirrita autumnata), a cold-intolerant forest pest. In the south-facing hills, however, the winter temperature never dropped below -35° C, thus allowing the moth to survive. Illep Jefremoff recalls, “I remember going fishing with my mother then. It was like having a heavy snowfall in the middle of the summer. The fish ate up the moths that fell into the water, but the birch trees dried up and died later.”

Now, a few occasional birch stumps are all that remain of the once lush birch forest that used to support a diverse wildlife community. The Skolt herders are concerned that as the climate warms, the moth outbreaks will become more frequent and widespread, thereby destroying an important spring food source for reindeer. Since the annual migration route of an individual reindeer herd is restricted to the territory of one of 56 reindeer cooperatives in Finland, herders have limited ability to find alternative sources of nutrientrich spring food for their reindeer.

Fishing for Atlantic salmon (Salmon salar) has been another vital part of Skolts’ subsistence and cultural heritage, and indeed, they consider themselves more fishermen than reindeer herders. In the summer of 2012, Vladimir Feodoroff and Jefremoff visited the traditionally known spawning sites as part of the project “Skolt Sámi Survival in the Middle of Rapid Change.” The goal of this collaboration between the Skolt Sámi, the Snowchange Cooperative, and the United Nations University (UNU) Traditional Knowledge Initiative is to help the Skolts to develop a climate change adaptation plan. The project is part of the international Indigenous Peoples Climate Change Assessment initiative that is being developed and coordinated by a Peru-based Indigenous nonprofit organization, ANDES, and supported by UNU.

By applying the methodology of community-led self-reflection, evaluation, and future-visioning based on local worldviews and traditional knowledge, a collective consensus emerged that the climate change challenges faced by the reindeer herders, while significant, are manageable; the Skolts identified their customary salmon fishery as a much greater concern. Accordingly, the Snowchange-Skolt partnership has been focused on strengthening the resilience of the Skolts’ traditional salmon fishery along the Näätämö River, one of the few remaining free-flowing waterways in northern Europe that still supports wild populations of Atlantic salmon. After visiting the spawning sites and holding several community-based workshops and discussions, the Skolt- Snowchange partnership drafted an Atlantic salmon co-management plan for the Näätämö River in April 2013. Discussions have also begun with other salmon users along the watershed and with representatives of the state fisheries agency about the future of the Näätämö salmon.

The main goal is to enhance spawning habitat and improve salmon survival along the Näätämö River. This includes restoring traditional salmon spawning grounds and reducing the predatory species that are hunting juvenile salmon, or smolt. The group also believes that only a single net (instead of three) or simply lures should be permitted for catching salmon. “Getting 10 salmon per person in the summer is enough for us Skolts,” says Feodoroff, “because we just use it for subsistence, not to sell.”

Adapting to Change
The changing climate alters the intricate relationships between the elements of the Skolt traditional territory. “Who are these new winds?” ask local Elders. “We do not know them, but we still try to greet them.” The future of the Skolts and their land in this time of climatic upheaval depends on their ability to maintain the balance in their relationships with the land and water, forest and tundra, reindeer and salmon. They believe this can be achieved only through respectful collaboration with others who have a stake in the future of the region and its biocultural heritage. “It is the time to say goodbye to some things we’ll never see again,” says Tero Mustonen, Selkie village chief and founder of Snowchange. “But it is also time to build new knowledge. And this knowledge can only emerge through keeping strong connections with the traditional territory. We must be there on the land as it is changing, so that we can change with it.”

This article is part of Conversations with the Earth (CWE): Indigenous Voices on Climate Change Initiative. To learn more about CWE, visit it on Facebook and Twitter. www. facebook.com/ConversationsEarth, @ConversEarth