Bringing a New Mandate to Light: Expert Mechanism on the Rights of Indigenous Peoples 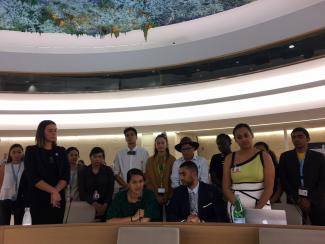 Indigenous Peoples are using EMRIP to claim their fundamental freedoms and assert rights of self-determination and sovereignty in choosing the thematic topics for the Human Rights Council, and by inviting EMRIP to their homelands to determine how human rights can be achieved. Along with reporting on its country missions and providing advice on implementing the Declaration in member states, EMRIP invites United Nations, regional, and national human rights bodies to share recent developments in regards to human rights.

EMRIP is composed of seven expert members from seven sociocultural regions: Albert Barumé from the Democratic Republic of the Congo for Africa (2018); Edtami Mansayagan from the Philippines for Asia (2020); Erika Yamada from Brazil for Latin America and the Caribbean (2019); Laila Vars from Norway for the Arctic (2020); Alexey Tsykarev from the Russian Federation for Russia, Eastern Europe, and Transcaucasus (2019); Kristen Carpenter from the United States for North America (2020); and Megan Davis from Australia for Pacific Oceania (2019). Yamada was elected to the chair-rapporteur.

At its most recent session, EMRIP shared its first report drafted by the experts to share with states and Indigenous Peoples on Free, Prior and Informed Consent: A Human Rights Based Approach. EMRIP also reported back on its in-augural country visits to Finland and Mexico to offer insights on specific legislation to be adopted related to Indigenous Peoples’ rights. Its annual agenda is taking shape for significant areas of advocacy with various human rights bodies at the United Nations and national level. The session also brought together EMRIP members with the core UN human rights treaty bodies members of the UN Human Rights Committee focusing on civil and political rights, as well as the Committee on the Elimination of all forms of Discrimination Against Women, focusing on the international bill of rights for women, sharing recent cases and evolving jurisprudence regarding Indigenous Peoples.

The study further considered the creation of new spaces for dialogue between Indigenous Peoples, States, and businesses in hopes of broadening the discussion surrounding FPIC. The responses of the expert members in attendance included commentary on the necessary inclusion of communities living in voluntary isolation; the potential for FPIC being a restorative mechanism between Indigenous Peoples and the state; the need for a common understanding of the meaning of FPIC; and Indigenous representation in UN mechanisms, among other concerns.

Indigenous organizations also had the floor to express their perspectives. Many reported that governments pursue development projects on Indigenous land without meeting the standard of FPIC and do not respect Indigenous Peoples’ rights. Once such organization, Independent Guåhan from Guam, requested “decolonization of the island by respecting Indigenous Peoples’ rights to self-determination and FPIC.” The Maya Leaders Alliance of Belize announced that they created their own consultation process using FPIC and self-determination as benchmarks; Congrès Populaire Coutumier Kanak of New Caledonia discussed their work of mapping Indigenous land and how this resolved land disputes; the  International Indian Treaty Council requested the repatriation of objects taken without Indigenous consent; and the Elders Council of the Shor People in Russia recommended that  FPIC be inscribed in recommendations to the Human Rights Council “with the aim of recognizing it as general principle of international law.”

After expert members spoke, member states had the opportunity to voice their opinions. Canada discussed the need for meaningful consultation in State actions; Norway commented that FPIC should be implemented “at a time when  it is still possible to impact legislative processes;” Guatemala stated that the right to FPIC is effectively implemented in-country; Peru expressed the importance of the mining industry to the country’s development and that “sustainable development will be guaranteed only if all citizens are granted the same rights and opportunities;” and Mexico asked that the experts consider “consultation fatigue,” and how States and companies keep a positive and respectful relationship when a community uses its right to say no.

EMRIP adopted its study and advice, allowing for the chair-rapporteur to revise based on discussions held during the 11th session. Linked to the study was a proposal calling upon UN agencies, programs, and funds such as the World Intellectual Property Organization and the World Health  Organization, as well as international financial institutions such as the World Bank, to promote good practices consistent with results of the study and the Declaration on the Rights of Indigenous Peoples.

The other historic aspect of the agenda was the review of the first country visits to Finland and Mexico. This was significant, as these were the first visits requested by Indigenous Peoples, rather than a State; the Saami Parliament of Finland sent the suggestion and Finland agreed. As one member noted, “The mission added layers of nuances to legal questions we couldn’t have reached without the country visit.” It was also important as it took place while the government was drafting an act, specifically two sections, on which EMRIP provided technical assistance.

There was also a call for National Action Plans to be created in cooperation with Indigenous Peoples to achieve implementation of the Declaration and 2014 UN World Conference on Indigenous Peoples Outcome Document. The plans, strategies, and measures are tools for the realization of recommendations from the Universal Periodic Review, treaty bodies, and special procedures of the UN Human Rights Council. EMRIP also noted all future Universal Periodic Review sessions, starting with the upcoming 3rd cycle, should include the Declaration in the list of standards for the reviews to be based on.

With all UN human rights treaty bodies based in Geneva, EMRIP is aiming to connect with the chair and experts of the committees to discuss recent developments in its reviews of States and specific cases submitted by Indigenous Peoples  and allies. Regarding future work, EMRIP decided its next annual study will focus on Indigenous Peoples, Migration, and Borders. It will be helpful as UN Member States are implementing the Global Compact for Safe, Orderly, and  Regular Migration, both internally and internationally.

— Joshua Cooper is a lecturer in Political Science at the  University of Hawai'i, West O'ahu and director of International Network for Diplomacy & Indigenous Governance Engaging in Nonviolence Organizing for Understanding & Self-Determination (INDIGENOUS).

To learn more about the Expert Mechanism on the Rights of Indigenous Peoples, visit: tinyurl.com/unemrip.