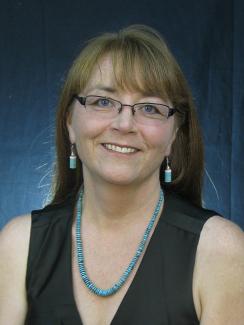 Our series spotlighting the work of our Board members continues with newly elected board member Lesley Kabotie (Crow).

The daughter of a Scotch-Irish rancher and a Crow Indian activist, Lesley Kabotie is the self-described product of “the conventional and the unconventional, the traditional and the progressive, white and Indian.” Growing up on the Crow Reservation in Montana, she says her life was shaped by her mother’s family. “My father was a rancher; my mother, Connie Yellowtail Jackson, an education activist within our local schools and across the nation. She and her friends worked hard to forge opportunities for quality Native-informed education
for Native people. [They] pounded on the doors of D.C., fighting for the reservation-based higher education—which birthed the Tribal Colleges. Later on, she became one of the founders of the Indians Into Medicine program, a supportive pathway for Natives pursuing medical degrees.”

Kabotie’s grandmother, Susie Walking Bear, was the first Native Registered Nurse in the United States, an advisor to the Surgeon General and Presidents in the areas of Indian health and child welfare at a time when the Indian Health Service was emerging from the practice of sterilizing Indian women. Her grandfather, Tom Yellowtail, was a Crow medicine man and Sundance chief.

With a bachelor’s degree in cultural anthropology from Stanford and a master’s degree in nonprofit management from Regis University, Kabotie says, “I understand white privilege and the assumptions it embodies because I’ve lived it. One of the greatest hurdles Native people face are the mass messages telling us that the answers to our most critical questions lie outside our own knowledgebase or capacity. We are constantly told that we don’t know enough, aren’t smart enough or capable enough to resolve the issues that debilitate Indian Country. When in fact, no one else holds the answers to these issues but us! Our greatest power is revealed when our people tap into our own values, ability, and commitment to make something positive happen in our own lives, communities, and nations. Through my work with Native peoples in the US and Canada, what has been revealed is that extraordinary opportunities arise when our people get in touch with their own capacity to be change agents in their own lives. Whether it’s on a social level, a political level, [or] an economic level, that awakening—or reemergence—of our inherent sovereign capacity is incredible. It’s a powerful motivator.”

Kabotie started Indigenous Collaboration Inc., Kabotie Consulting, specializing in consensus-based planning, and facilitation services after 20 years of working with tribes and their communities. She also served as a member of the Steering Committee to address nonprofit inclusiveness for The Denver Foundation. “One of the things my company focuses on is reconnecting people to internal dialogues that bring clarity to the solutions that make the most sense for them. It’s not about being told ‘the right answer,’ or an answer that seems good in the moment, but to be deeply in touch with ‘this makes sense for us,’ and to achieve true empowerment through understanding the strength of their own motivations. I have a lot of commitment to bringing consensus processes back to the tables of Indian country so that Native people are able to have and benefit from the coherent, motivating dialogues that lead to practical, effective action.”

One of the biggest issues facing Native people, as Kabotie sees it, is the limited and inconsistent access to information that supports collective dialogue and effective decision-making. “When tribal leaders come into leadership, they’re already behind the eight ball,” she says. “There isn’t time for them to learn the context of all the things that they have to make
decisions on. There are a lot of trains that have already left the station that they must jump onto.” She explains that the problem is that “We are reacting to systems and processes of a mainstream environment that move at a different pace. And we often sit in the back seat, feeling disempowered like many disengaged Americans do. It’s a common dynamic Native nations experience in America.” And so, she says, “I feel like my best contribution is to get in the car, climb into the backseat and start a dialogue amongst everyone in the vehicle: ‘If you
really want to change directions, where are we headed, who’s willing to climb out in front to lay the track in front of us; how fast shall we go; and how should we support whoever climbs out front for our collective benefit?’”

She continues, “One of the things that is really exciting to me is working with nations fraught with divisiveness. It is very encouraging to see our Native peoples, who sit in different  positions of influence and power, actively engage identity, cultural values, and history as a rallying point for coherent dialogue and decision-making. It’s not: ‘Forget about our history,
we want to be capitalists, we want the American dream.’ The collective dialogue about what really matters to us does include economic prosperity, but within the context of a healthy, vibrant cultural identity. The conversation on understanding where these priorities meet still has merit and incredible power. It’s extraordinary! I’ve seen the power of this conversation play out in every context: from energy development to enterprise development to forging a response within tribal courts, police, health providers, and community programs of all kinds. What do we need to do to create a healthy connection, practical response and stabilize our traumatized communities? To see leaders and communities coming together to implement a coherent response rooted in the values of who we are...that’s the stuff that makes me prioritize my service to Indian country.”

When asked about her vision for her involvement with Cultural Survival, Kabotie says she recognizes “the absolute necessity of providing objective information to Indigenous people grappling with the parameters of who they are in a changing world, discerning how to move their lives forward in a good way, and to not be interfered with or undermined in that process. It is important to provide access to objective, quality information that supports informed choices and good decisions that are consistent with their own values from their past and for their future. And that’s what’s needed: for Indigenous Peoples to be affirmed in their own efforts to have conversations and organize themselves according to what they feel is best for them.” She adds, “I’m excited to be part of Cultural Survival, to support its movement to advocate for the availability of information and capacity building, because that’s who I am at my core: I am a facilitator. The very definition of facilitating is to make an action or process easier. I am committed to making it easier for Indigenous people to come together in making decisions on those things that are most important to them.”