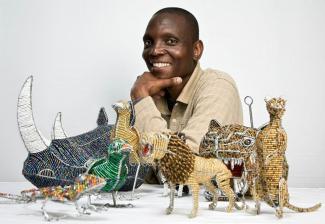 It’s easy to balk at the prices of children’s toys today; the newest gadget comes into fashion with a hefty price tag only to be replaced in a few short months by the next obsession. Zimbabwean wire artist Bernard Domingo has dealt with this problem, which he encountered in his own childhood, with creativity and resourcefulness. What began as a youthful interest in making toys for himself has grown into a fruitful business and love of art, changing his life in ways he never anticipated.

Born in Zimbabwe as part of the Shona people, Domingo’s upbringing placed a special emphasis on creativity. He started making toys at age six, and, using wire coat hangers as his first medium, began teaching his friends and other neighborhood children how to do the same. This practice in teaching and toymaking eventually led him to explore other mediums of art; the wire sculptures he makes and sells today are the result of a lifetime of creativity and communal instruction.

While the spirit of his sculptures originated in his home country of Zimbabwe, Domingo has traveled to the far reaches of the world in order to sell his art. Finding no jobs once he was out of school, he started his own business and now sells his art on multiple continents. The sale of his art abroad has allowed him to build a house for his family back in Zimbabwe and also expand his practice by way of creating the artistic cooperative Domingo Wirecraft, which produces his beaded figurines.

Domingo’s artistic success has enabled him to build a fruitful life in the United States. Coordinating the production of his art in Zimbabwe while living and selling his art in the United States is a difficult task; however, Domingo sees this as the most worthwhile effort. As a member of a large family with six siblings, Domingo uses the profits from his art to support his family in Zimbabwe. “If I was back over there, all those guys would be struggling the same way I would be,” he said, expressing gratitude for the opportunity to earn money to send his relatives’ children to school and improve the quality of their lives.

Selling his art in the United States has also improved Domingo’s reputation as an artist, giving him wider name recognition. According to Domingo, the opportunity to sell his art at the Cultural Survival Bazaars has been both positive and profitable, connecting him to a larger market of art buyers and a wealth of social resources. Participating in the bazaars has also played an emotionally uplifting role in his life; speaking about the mood and social experiences at the bazaars, Domingo said, “You need your mind to be free; when I go there, my mind is always free.”

Domingo’s hard work, creativity, and resilience have paved the path to his success in true defiance of hardship, such that he now leads a life of happiness and productivity. Domingo values the path his life has taken, musing, “The place that I’m in now is a good place to be.”