Assets, Not Deficits: A Conversation with Sarah Eagle Heart 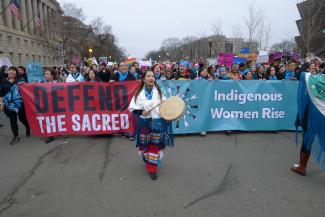 Sarah Eagle Heart (Oglala Lakota) grew up on the Pine Ridge Reservation in South Dakota, raised by her grandmother and extended family. Her experiences range from teen activist and journalist to advocacy organization leader, including working for several years internationally as program officer for Indigenous Peoples and team leader for diversity, social justice, and environmental justice within the Episcopal Church. Currently she is the CEO of Los Angeles and Minneapolis-based Native Americans in Philanthropy (NAP), which “educates and empowers a sacred circle of Indigenous Peoples and philanthropies to create healthy and sustainable communities for all.” Cultural Survival recently spoke with Eagle Heart about her journey and leadership in philanthropy. 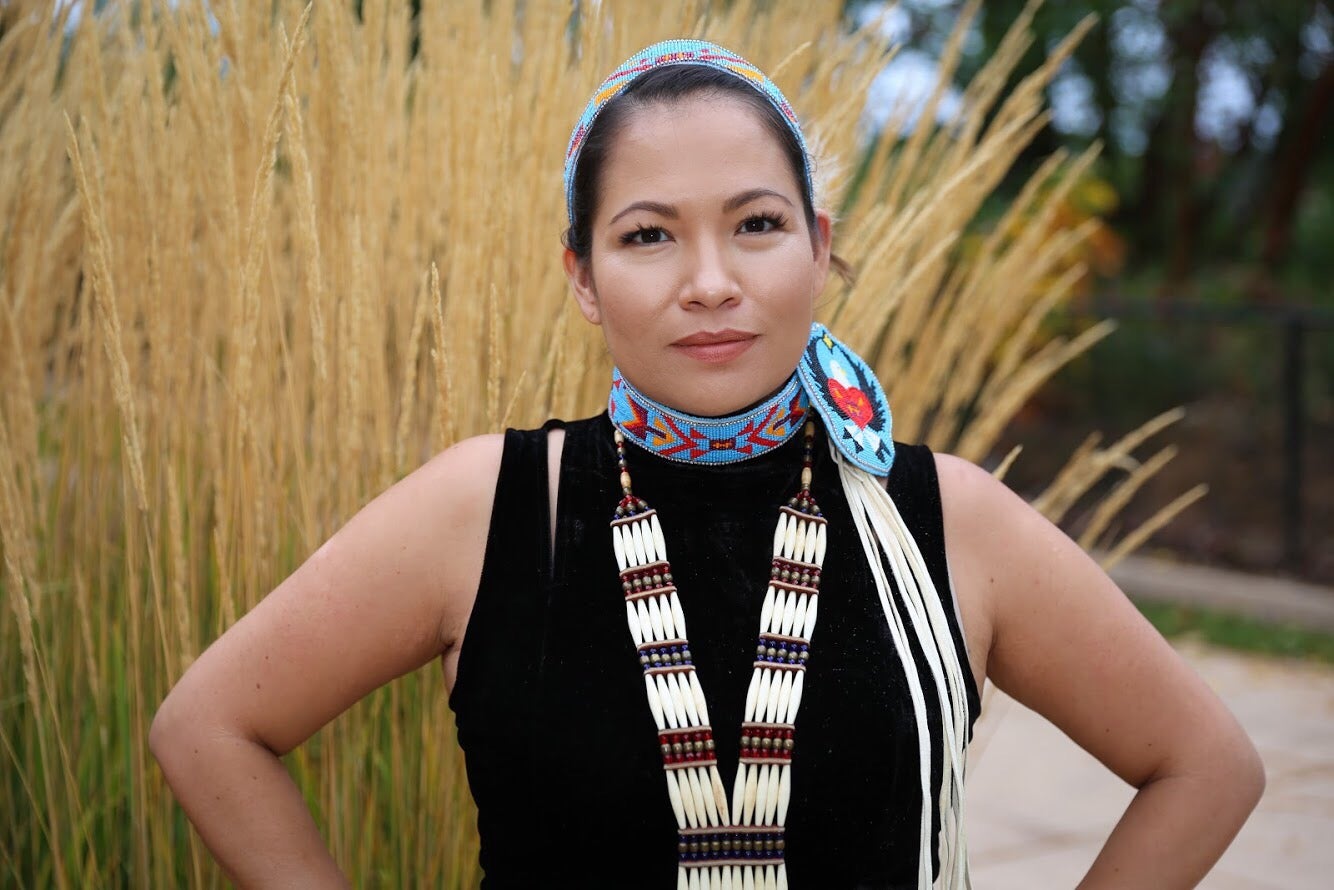 Cultural Survival: Please share the story of your work surrounding the “Warrior Homecoming” at your high school.
Sarah Eagle Heart: This is really the beginning of my activism. I have a twin sister and we were really involved in school activities in Martin, South Dakota, which is a border town between Pine Ridge Indian Reservation and Rosebud Indian Reservation. As juniors in high school, we noticed this homecoming ceremony where mostly white students were reenacting a drama called “ceremony” with Medicine Man and five warrior princesses and a big Chief. I remember both of us sighing heavily with disgust, deciding “We have to do something.” So, at age 16, we decided to protest. As an aspiring journalist, I was in a summer program for Native Americans in journalism and interned for two summers at Indian Country Today. When the next summer came, we went on the radio, we told newspapers, and we just started telling the story. The community was so segregated at that time that many people on the reservations had no idea the event was even happening. We definitely encountered all the arguments that we hear today about ‘we’re honoring you, you should be happy.” Even at that young age we both knew that there was no compromise; there was no way to make that fiction palatable. We said no, and that led to four years of protesting.

In our first year, we had folks from community organizations like Lakota Student Alliance and American Indian Movement that came to help us, and we held public forums and a march down Main Street. Being so young and facing all of these people that were outwardly angry for disrupting this 57-year old tradition...we were threatened in school with, ‘we’re going to throw rocks at you, we’re going to throw eggs at you if you show up here.’ It was very traumatic and scary. It was our senior year of high school, so our friends we had all our lives were no longer our friends and there was all this tension surrounding us. But finally we succeeded. That experience taught me to trust the Creator, and that if you find the right people to support you, pathways open and change can occur.

CS: How did your experiences as a teen activist lead you to a career in philanthropy?
SEH: I was going to be a journalist. As my career unfolded, I went from working in journalism to marketing and advertising at an Indian casino to a church denomination and then to philanthropy. As a young person I was covering stories on Tribal policy and issues affecting the community. It came very naturally that one of the core skill sets throughout every job I held was advocacy. I spent time in New Zealand, Australia, Canada, Ecuador, and Bolivia, learning about the issues that different peoples face. As a team leader in the Episcopal Church for seven years, I enjoyed finding the parallels between cultural histories and learning how to advocate for each other. The work that I did at the Episcopal Church is really applicable within the philanthropic space, and I have found success in working with allies. I’m very humbled to have recently won the American Express NGEN Leadership Award, which collectively recognizes and salutes the trailblazing work of one next-generation leader whose efforts have had a transformative impact on a critical societal need.

CS: What role does philanthropy play for Indigenous communities?
SEH: Philanthropy can and should play a big role righting the injustices Indigenous communities face. Most of philanthropy lacks awareness and knowledge of Native issues across the board; most philanthropic efforts to improve the lives of men and women of color often overlook the distinctive needs of Native Americans, and funding to our community still remains disproportionately low. It’s imperative that we are there to build those relationships and educate. Philanthropy often follows a deficit-based model, rather than an asset-based model. One of our roles is to get more accurate research about our communities, which can also help inform philanthropy. We’ve intentionally worked with Indigenous scholars and found a way to develop research that highlights protective factors from an Indigenous worldview through our Indigenous Life Course. The limited research currently available in the philanthropic arena highlights deficits and the horrific statistics plaguing our communities like diabetes, violence, and criminalization, but doesn’t offer solutions—so we are already at a disadvantage. We also educate funders and work to create connections between philanthropy, nonprofits, and Tribal organizations. A good example of this is when we invited a group of funders to join us on a trip to Standing Rock, and this directly led to a $1.25 million donation to the Standing Rock Sioux Tribe from the Wallace Global Fund. We are really proud of this accomplishment because the tribe trusted us to support them and it was important to us to see action as a result of our work. We continue to engage in developing innovative partnerships to raise the visibility of Native issues.

CS: What was your involvement in securing funding from the proceeds of the book from the Women’s March?
SEH: A year ago, several organizations came together under Indigenous Women Rise to bring representation to the Women’s March in Washington. We worked under that umbrella to help raise visibility for Indigenous women’s issues. Through relationships, Native Americans in Philanthropy was able to create a social media movement with an amazing bandana designed by Native designer Bethany Yellowtail (Northern Cheyenne/Crow). Several members of Indigenous Women Rise served on the conveners’ table advocating for inclusion on the Women’s March Unity Principles, which addressed the diversity of participants and spoke to how they are impacted by a multitude of intersecting social justice and human rights issues. We were ecstatic when 1,000 women came together in prayer. It was so powerful to sing the Women’s Warrior song from our First Nations relatives to highlight the issue of missing murdered Indigenous women. We held a gathering the next day with nonprofits and organizational leaders to lay out their priorities. We also stayed in relationship with organizers of the Women’s March and were honored they chose Indigenous Women Rise to be one of three recipients for the book proceeds of Together We Rise. The funds will go to the National Indigenous Women’s Resource Center, which addresses domestic violence in our communities.

CS: A lot of the work of Native Americans in Philanthropy concerns Indigenous youth. What are those initiatives?
SEH: Following the Standing Rock protest we launched the #GenIndigenous Fund, focused on supporting Native youth organizing, in partnership with the Minneapolis Foundation. We have another fund called Native Voices Rising in partnership with the Common Counsel Foundation. Native Voices Rising is specifically around civic engagement, voter registration, and advocacy.

We’ve also been working with My Brother’s Keeper, former President Obama’s initiative to address gaps faced by boys and young men of color to ensure that all young people can reach their full potential. And we’ve coordinated thought leadership convenings to find out Native youth priorities and support them.

We’ve also focused on narrative change and advocacy, including educational components like the Women’s March, or one of our new partnerships with Taboo from the Black Eyed Peas. Taboo recently won an MTV Video Music Award for Best Fight against the System and used his platform to raise visibility for Indigenous women. Other collaborators include John Legend, who, through his virtual reality project Rainbow Crow, tells an inspiring Indigenous story. One of the reasons why we work within the pop culture arena is because it’s a faster way to educate. Right now with social media we have been fortunate to work with some incredible people who can share their powerful platforms to make change.

Engaging philanthropy and advocating for resources to support Native leaders, organizations, and communities are our priority issues. We believe that everything is connected, and we want to continue to carry our holistic worldview into all aspects of our work. In the future, we will continue to execute our plan through innovative research, philanthropic education, generating visibility, and advocacy campaigns. All of the intertwined work has really helped us gain a lot of traction in the philanthropic sector and move into a new area of action and healing. I could not be more grateful for the opportunity to do the work that I do.

Photo: Before the Women’s March on Washington in 2017, Indigenous women from across the country gathered in front of the National Museum of the American Indian as part of the Indigenous Women Rise movement. Photo   courtesy of Native Americans in Philanthropy.