Too Late to Sit Back and Do Nothing: The HIV/AIDS Epidemic in Tanah Papua 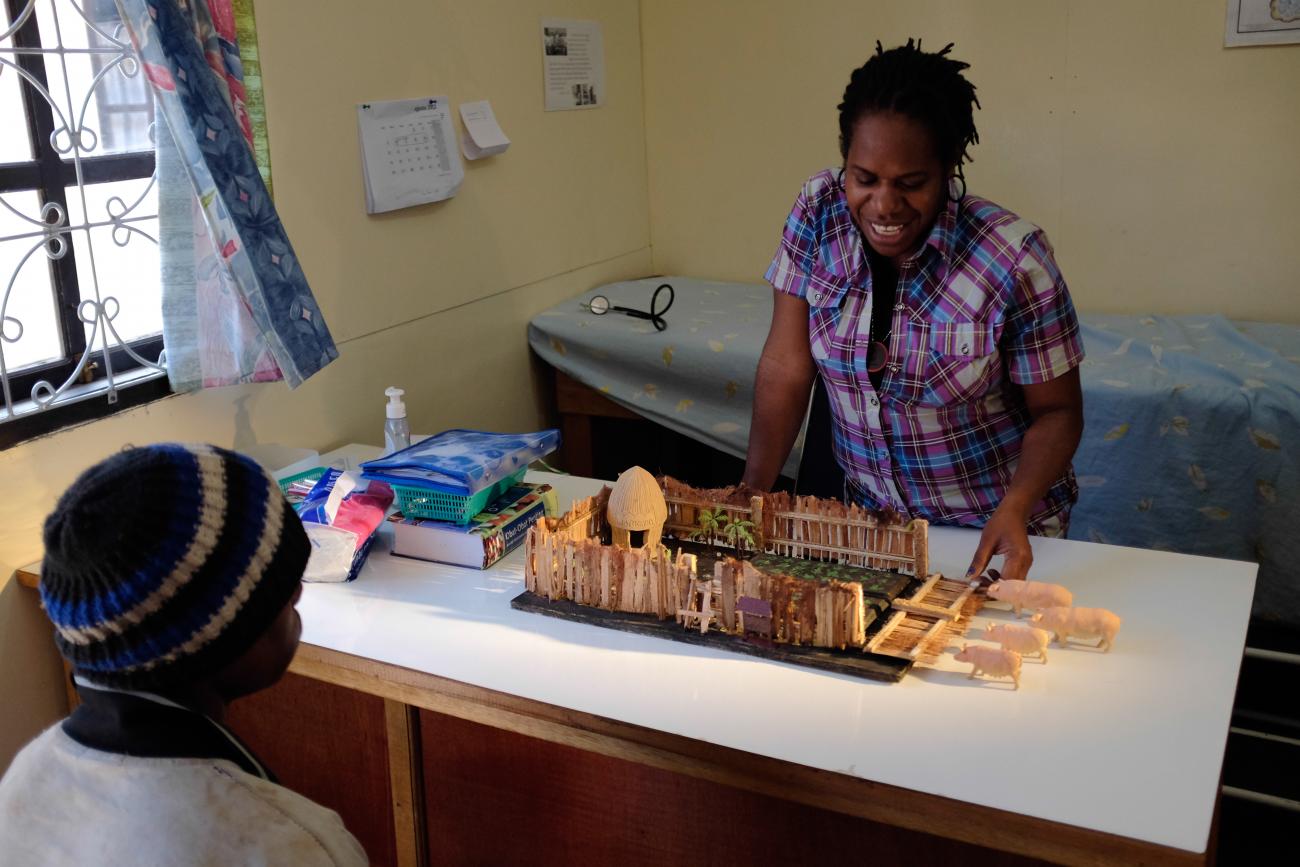 The sun is slowly clearing the morning mist as we walk down a muddy path along the Uwe river in Wamena, the main highland town in Tanah Papua, Indonesia (western half of the island of New Guinea, the Indonesian provinces of Papua and West Papua). We are led by Freddi*, an HIV outreach worker in his early 30s. The sound of men and women breaking rocks drifts towards us. Later in the day, they will load them into construction trucks. We climb over a stone wall and enter a family compound and a young girl invites us into her home, a highland hut of wooden walls and thatched roof. Inside it is dark and smoky and you can barely see the young man lying on a thin mattress in a corner. He is emaciated, his eyes, deep in their sockets, gaze into emptiness. Every so often, a rumbling cough shakes his chest. Between two coughing fits, Tarius* (23) tells us he has been unable to eat for days.

Freddi is very quick to assess Tarius' condition: Tuberculosis and the risk of AIDS. “This is a common scenario,” he tells us “in our culture, one will only seek medical attention when it is impossible to get up.” HIV/AIDS is still a relatively new disease in the region, and people are still unaware of its modes of transmission and consequences. Although it holds only 1 percent of Indonesia’s population, Tanah Papua has HIV/AIDS levels reported to be 15 times higher than the national average. According to UNAIDS it is now considered a low level epidemic, with a prevalence of 2.4 percent among the general population versus a national average of 0.3 percent. Since the controversial inclusion of the western half of the island of New Guinea into Indonesia in 1969, social indicators in Papua remain the lowest in the country.

In Tanah Papua, the 260 or so Indigenous Papuan tribes make up less than half of the 3.6 million inhabitants. HIV prevalence among Indonesian migrants is much lower than among the Indigenous population who, in some areas make up almost 80 percent of the cases, The latest statistics for Tanah Papua indicates that 13,836 people are HIV positive. The disproportionate infection rates are particularly obvious in the highland region where the latest data gathered by NGOs and VCT centres in the Jayawijaya regency shows that 3,257 people had tested positive by the end of July 2013. Local NGOs estimate that you need to multiply the figure by ten to get closer to the real number of people already carrying the virus. Testing facilities are only available in urban areas and most of those who undergo testing do so because they are showing serious signs of reoccurring opportunistic diseases such as tuberculosis, dysentery or pneumonia, meaning that they are already at an advanced stage of the illness.

In Tanah Papua, transmission is almost entirely through heterosexual sex. Values about sex, courtship and pregnancy are being radically challenged by Indonesian migration, rapid and aggressive development and the dissolution of traditional ideals. Youth, young men in particular, have become highly mobile, drawn to the charms of the cities or in search of irregular wage labour or education. Increased mobility offers the opportunity for a larger number of sexual partners, far from the prying eyes of family and community. Furthermore, the changing cultural and socio-economic environment, as well as the influx of consumer commodities, have transformed relations and courtship between young Papuan men and women. There is now a trend towards sex at a younger age with a wider range of partners.

Freddi takes Tarius to hospital and as we wait for the results, he reveals he is also HIV positive. “I think I contracted the virus around the year 2000 when I was living in Jayapura, the provincial capital. When I started getting ill, I returned to the highlands. Initially, my family was very supportive and helped me to pay for treatment. Testing for HIV in Wamena had not yet started, and doctors could not find the source of what made me weaker and weaker by the day. As Western medicine did not seem to help, my family turned to traditional medicine. This involved divination and a pig was killed to check its entrails for signs and according to what was found, I was made to follow a particular herbal treatment. But I was not getting better,” Freddi explains with a sad smile. “My family had to kill many pigs at great financial cost. Eventually the family and community became suspicious and some threatened to burn me alive. I knew that this had happened before and I got scared. I fled back to Jayapura and after entering hospital, I was eventually diagnosed with HIV.”

People might not be at risk of being burned alive anymore like some years ago, but the stigma attached to HIV is still strong. Some priests proclaim it a punishment of God on those who have sinned. Most churches are slow to tackle the problem, and it can still be difficult to find a priest to bury someone who has died of AIDS. Cultural values in the highlands of Papua are complex and differ from tribe to tribe, but the roots of stigma lie in cultural practice as much as they do in the larger macro-economic and political situation. The fear of stigmatization in the community stops people from sharing their experiences and makes them reluctant to get tested. Many of those who get a positive result do not return to the hospital and do not follow any treatment. Many keep it a secret from their family and partners. Once their condition begins to deteriorate seriously, many withdraw and isolate themselves.

In rural areas, health care services are few and far between. The majority of health care staff in the available centres are migrants from other parts of Indonesia who do not speak the local languages and have little affinities for Indigenous cultural beliefs and practices. Most Papuans view government health care services, which remain riddled with corruption, a lack of proper follow-up procedures and poor training for the staff, as part of the Indonesian colonial machinery. Rumours are ripe that HIV was introduced in order to decimate the Indigenous population. Trust towards government run hospitals is low and many will only go there as a last resort.

Negligence on a massive scale

“Until now there has been no serious action from the government but only lip service. HIV/AIDS has become an emergency and it is too late to sit back and do nothing,” declares David*, the head of a local NGO. “If we want to save the Indigenous population, and guarantee the survival of our people, then HIV prevention and treatment needs to become a priority in Tanah Papua.” David worries that most AIDS awareness raising campaigns are developed in offices in Jakarta, far from the cultural and socio-economic reality of Papua. “It would be more useful to look at Papua New Guinea and programmes there which have proven successful.” Instead, the official response to the crisis has been to inject large amounts of money into programs with a minimal amount of monitoring and preliminary research.

Visiting a few patients every day like Freddi does is helping a handful of people on a personal level, but a concerted, large-scale response by the government, with the involvement of local NGOs and community leaders has yet to happen. The poor standards or complete lack of health services and education throughout the region not only facilitate the spread of the disease, they also severely impede any efficient response to the epidemic. Indeed, although the provincial governments have made HIV testing and treatment free, many Papuans do not have access to health care or education and are unlikely to be reached by awareness raising campaigns any time soon.

The long running political conflict and the climate of mistrust and fear it has created coupled to a culture of apathy within the government bureaucracy and large parts of the population, partly brought about by an education system reminiscent of Indonesia's Suharto era that fails to teach students to be critical and proactive, is making it difficult for local activists to get a popular movement started. What is needed is a prevention campaign based on Papua's Indigenous cultural values and its particular socio-economic context that involves the whole community and gives it ownership of the awareness-raising and prevention processes. The Indonesian government - national, provincial and local - however, has a duty of care. Its present lack of effective, accountable assistance to thousands of Indigenous Papuans is paramount to negligence on a massive scale.

*All names in this article have been changed

Carole Reckinger (carole81@gmail.com) has been interested in Indigenous Rights and Indonesian/Papuan social and political issues since first visiting the archipelago over a decade ago while studying Development Studies and Southeast Asian studies at the School of Oriental and African Studies (SOAS). She has lived and worked in different parts of Indonesia, including Wamena and Jayapura and is visiting Papua regularly since.

Antoine Lemaire (antoinelemaire@gmail.com) studied Social Anthropology at SOAS. He has lived and worked in different parts of Indonesia and Papua. He is particularly interested in the impact of capitalism on material culture in Indigenous societies.

Their photographic work on the HIV Epidemic in Tanah Papua can be viewed here www.carolereckinger.co.uk.