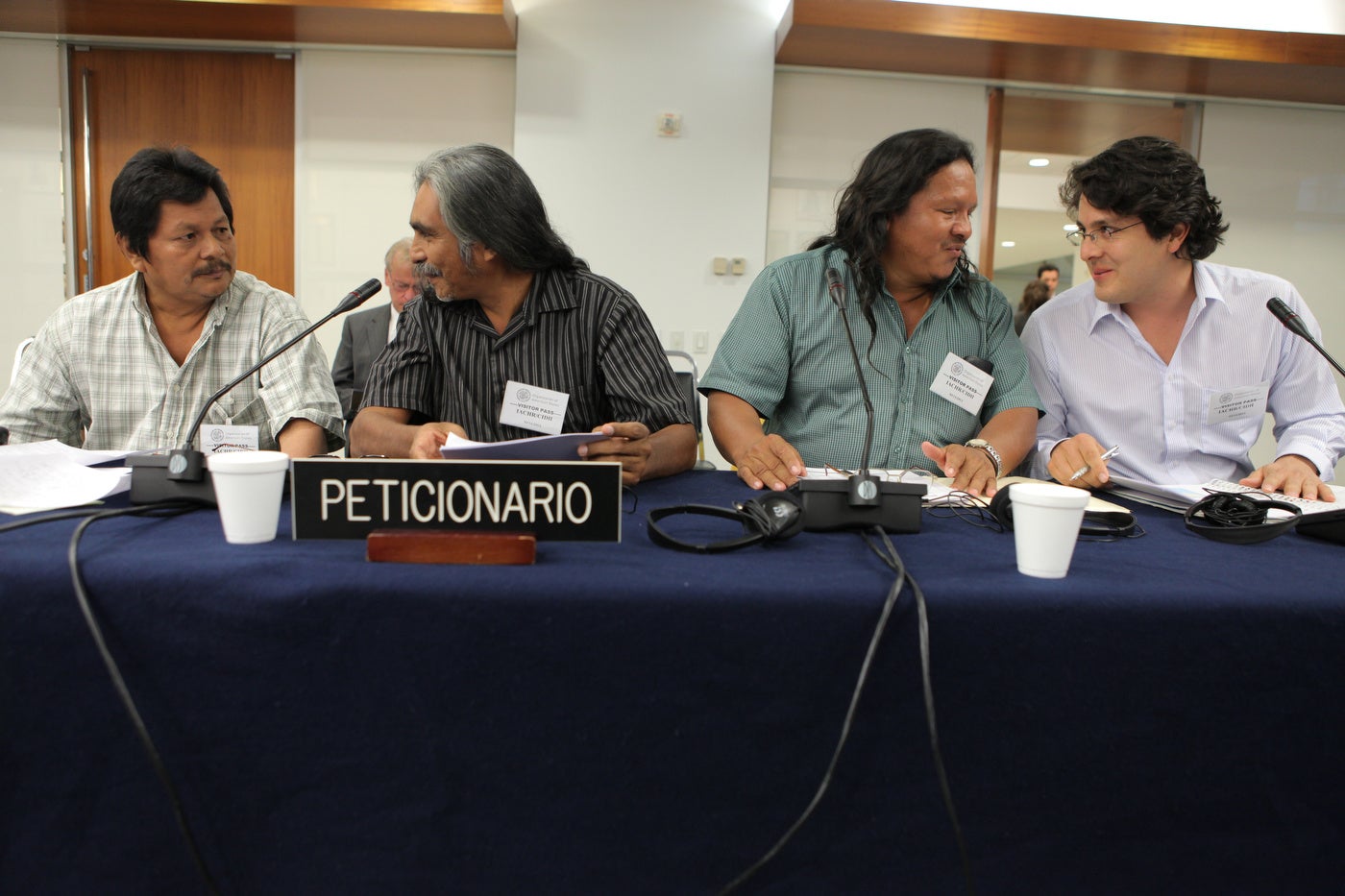 “The non-Indigenous colonization of Indigenous territories is the most serious unresolved issue in Costa Rica. This colonization is aggravated when it is done through violent methods. And such violence is even more worrisome when the Costa Rican State exhibits an absence of legal, political and administrative clarity in proceeding with the legal eviction of non-Indigenous factors in Indigenous territories. Not in vain, the Inter-American Commission on Human Rights issued a well-founded, precautionary measure # 321-12 to protect the Indigenous People Brörán and Bribri of Salitre, province of Puntarenas, urging the corresponding State authorities to take the relevant measures in order to protect the life and personal integrity of Indigenous citizens. ”

The preceding paragraph is a quote from Cultural Survival’s Universal Periodic Review report on Costa Rica submitted in October 2018 to the United Nations, referring to the human rights of Indigenous Peoples. Five months after submitting the report to the United Nations, a well-known and influential Costa Rican Indigenous leader, Sergio Rojas, was murdered, and the person responsible has yet not been identified or charged.  The UN, through its main rapporteurs on human rights, expressed its outrage. Michel Forst, special rapporteur on the situation of human rights defenders; Victoria Tauli Corpuz, special rapporteur on the rights of indigenous peoples and Agnès Callamard, special rapporteur on extrajudicial, summary or arbitrary executions, condemned the murder of Rojas and demanded justice justice according to the law. The UN High Commissioner for Human Rights, under the authority of Chilean President Michelle Bachelet, similarly expressed condemnation and demanded action.

The State of Costa Rica is still failing to protect the rights of Indigenous Peoples. The country, accustomed to receiving praise from the international community for its progressive stands on human rights and environmental issues, now finds itself in an uncomfortable situation. In April 2019, Cultural Survival attended the United Nations Permanent Forum on Indigenous Issues and met with the Permanent Mission of Costa Rica. The delegation was cordially received by Ambassador Christian Guillermet-Fernández, who was made aware of the serious international impact of the assassination of Sergio Rojas and reminded of the ruling of the State of Costa Rica to ensure Indigenous territorial autonomy in practice. The Costa Rican representatives recognized the seriousness and legitimacy of the concerns expressed in the face of the violent death of such a prominent Indigenous leader, an issue that, in the words of diplomats, has been condemned by the President of the Republic, Carlos Alvarado Quesada. Likewise, the Ambassador acknowledged that Costa Rica has an old debt to Indigenous Peoples in relation to territorial autonomy, an issue that arises from the legal entailment of expropriation and compensation of land to non-Indigenous holders. Cultural Survival maintains that, since territorial autonomy is a constitutional right under Costa Rican law and is also an obligation established in several international Indigenous human rights standards to which Costa Rica has adhered, measures to ensure this autonomy must be implemented as soon as possible.

Cultural Survival’s delegation was also received by the Permanent Missions of Switzerland, Denmark, Canada, and Norway, who were informed about the current status of Indigenous rights in Costa Rica and about the murder of Sergio Rojas. As with its appeal to Costa Rican representatives, Cultural Survival staff explained the relevance of the Universal Periodic Review of the State of Costa Rica to this matter and urged them to speak and act to seek justice.

In recent months, international pressure has remained strong. Mexican diplomat, Joel Hernández, rapporteur of the Inter-American Commission on Human Rights (IACHR) for Costa Rica, visited that country at the end of May, with three objectives: assessing in situ the precautionary measures that the IACHR established in 2015; understanding the context in which the assassination of Rojas took place, as well as the precarious situation of the Teribe (Térraba) and the Bribri (Salitre) peoples in light of the vulnerability caused by the murder of Rojas; and understanding the legal semi-paralysis regarding the return of the land to Indigenous Peoples. It should be noted that the IACHR was invited by the government, through its diplomatic representatives, to visit the country. Hernández's conclusion, after having talked thoroughly with Indigenous leaders, is that the State of Costa Rica must promptly clarify the details surrounding the homicide of Rojas and procure justice and appropriate punishment. Likewise, the process of land recovery and its return to Indigenous Peoples must be accelerated.

Felipe Figueroa Morales, Secretary of the Ditsö Iriria Ajkonuk Wakpa Salitre Council, said, after having met with the Rapporteur of the IACHR: “He understood well the challenges we face [as Indigenous Peoples] with both the Executive Power and the Judicial Power, as well as the internal rules of the country and local police to ensure respect for our human rights." Moreover, Paul Sibar, Coordinating Team member of Council of Elders Bröran Térraba, said "the Commissioner asked good questions showed good interest, in depth for our circumstances and we are happy that the IACHR will redouble its efforts regarding the Precautionary Measures granted and requested that the State also redouble its efforts. ”

Among other international calls made to the government of Costa Rica was a document signed by 40 laureates, from 29 countries, by the prestigious Right Livelihood Award Foundation. This document condemned the murder of Sergio Rojas and demanded an investigation leading to the punishment of those responsible for the crime.

The struggle of Indigenous Peoples in Costa Rica continues despite the tragic loss of one of its most prominent leaders. The national and international protest did not wait in front of a very sensitive government in the field of human rights, and willing to correct its negligence in complying with the physical and legal protection that was due to Sergio Rojas, other members and their community in general. The morning after the death of Rojas, the President of Costa Rica, Carlos Alvarado, also condemned the murder and ordered an "emergency protocol" to protect Sergio's family, while giving instructions to the police to investigate the crime.

In truth, precautionary measures did not work to protect the life of Sergio Rojas. That is precisely why the IACHR went to the country--because the tragic death of the leader cannot and should not be separated from its context.  That context includes  the struggle of the Teribe de Térraba (Brörán) and Bribri de Salitre to recover their ancestral lands and to fully exercise their long-awaited indigenous autonomy, which is a right already incorporated in the Political Constitution through International Treaties signed and ratified by the Costa Rican State.

The two affected communities made public a joint communiqué in which they expressed the following: “The Government expressed its understanding that in the past it failed to take all necessary measures and its hope is that now the two peoples will work together with their administration to improve the application of Precautionary Measures. Indigenous peoples recognized the gesture, while clearly stating that, due to the absence of effective actions in the past, trust will only be obtained when the government delivers concrete actions. Everyone understood this reality. The Bribri and the Teribe (Brörán) believe that the next two months will be revealing. The people have high expectations, but also the intention to collaborate.”

On June 3, 2019, the IACHR issued an extensive press release, which highlighted the following points: the Commission took note of the creation of a special police group to solve the murder of Sergio Rojas, since the murderer has not yet been identified; the commitment to continue strengthening the Office of the Prosecutor for Indigenous Affairs, so as to avoid criminalizing recovery actions within the framework of land recovery, a fight to which the crime of usurpation should not be applied; the IACHR will closely follow the Indigenous Territories Recovery Plan (RTI Plan), which indicates a roadmap to further the recovery of Indigenous lands to the Indigenous peoples themselves. Thus far this plan has been pursued only halfway, very slowly and with frustrating results.

The State of Costa Rica has been put on alert regarding human rights issues such as failing to guarantee the physical security of Indigenous leaders such as Sergio Rojas as well as the judicial slowness trials related to the  recovery of ancestral lands. The IACHR had full access to the Bribri and Teribe communities, and collected the testimonies of their spokespersons. It was the national government that invited the Organization of American States body to visit the country.