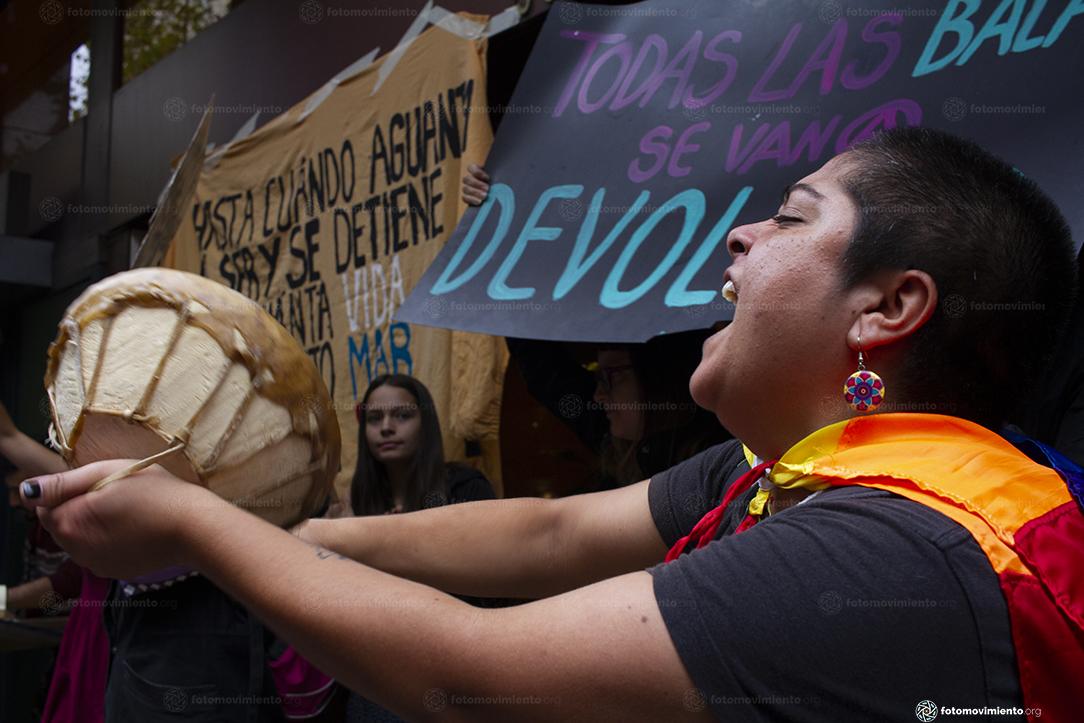 On October 18, 219, the Chilean government decided to raise the metro fare by 4 percent. Although a seemingly benign act, especially in a country praised by many for its stability and economic success, this fare increase of 30 peso—roughly four cents USD—has led to massive protests all over the country. These protests are not only against the fare increase, but also against expensive education costs—the highest in South America, the status of water as a private good, poor healthcare, and police and government corruption. Since the protest began, protestors have burnt metro stations and looted buildings, but in addition, at least 19 deaths and 2000 detentions have occurred under the shadow of President Sebastian Piñera and his government’s violent repression. However organizations on the ground report that  the real figures of deaths, detentions, and human rights violations, including disappearances, torture, and rape, are in reality higher than the numbers reported by the Chilean authorities. A state of emergency was called and a curfew was put in place. Although started by students, these protests have grown to include many different social groups, with Indigenous Peoples, of which the largest community are the Mapuche, at the forefront.

Indigenous communities have long been frustrated  with the Chilean government due to years of repression and second-class treatment. Numbering at roughly two million people and  10 percent of the population, their numbers are not small, but still their needs and rights have been marginalized by Piñera and previous administrations. One of the chief demands of Indigenous communities in the current protest movement is a formation of a plurinational state, in which Indigenous communities are granted more sovereignty and self-determination. Just under a year before the protests began, Camilo Catrillanca, a Mapuche farmer, was shot in the back and killed by the police. His image has become one of the symbols held up by protestors, and especially by the Indigenous community, as the Chilean government has killed about fifteen Mapuche since 1990. Only days before the mass protests began, on October 13 —known officially in Chile as the Day of the Meeting of Two Worlds—thousands of Indigenous people marched peacefully in the capital, Santiago. They called for the release of detained activists, greater rights, and the return of ancestral lands taken by the government. The daughter of detained Indigenous activist Alberto Curamil read out a letter of his: “Today we reaffirm that there is nothing to celebrate on these dates, but that we must make visible all the resistance that the community has made to the attacks of destruction that are being carried out by large national and international companies in our territory.”

Of particular concern for Indigenous communities now is oil fracking, which has resulted in the dispossession and discrimination.  One Campo Maripe member told of how the fracking boom has led to environmental, health, and agricultural problems. “The oil companies entered our land without our permission,” he tells, and “we had goats born without jaws, without mouths.” Other individuals in the area note suffering from health problems such as bone decalcification, respiratory issues, and skin lesions.  The community began blocking roads to the fracking wells starting in 2014 and it has remained a pressing issue at the current protests.

A key moment came just a week after the protests began, on October 25, as Indigenous protesters in Chile blocked access to lithium operations with a road blockade, thus limiting lithium production for the world’s top producer, Chile’s SQM. “They’re completely shut down...the roads are closed” Sergio Cabillos, president of the Atacama Indigenous Council, told Reuters. Lithium is an essential element in the manufacturing of almost all the electronics used today, including laptops and cell phones, and electric and hybrid cars.  Chile is the world’s foremost producer of this element. This blockade was not only linked to the economic-based protests sweeping over the rest of the country, but also to the fear of harmful environmental and social impacts due to lithium mining in Chile’s desert salt basin. “We hope to continue protesting until the state hears us and attends our legitimate demands,” Cabillos stated. The same day, over one million protesters marched for Piñera’s resignation, a president who is, in his own words, “willing to use violence with no limits.”

Soon after, Mapuche protesters in Temuco, several hundred kilometers south of Santiago, acted to tear down symbolism venerating Chile’s colonial history. According to The Guardian, “hooded demonstrators lassoed a statue of a 16th-century Spanish conquistador last week and yanked it to the ground.” Bystanders cheered the demonstrators on. Other statues of Spanish colonialists had similar fates, with busts of General Cornelia Saavedra and founding father Diego Portales also being defaced. On October 20 in the northern city of La Serena, a statue of Francisco de Aguirre was taken town by protestors and replaced by the torso of “Milanka, Mujer Diaguita,” a woman belonging to the Diaguita Indigenous community. The word “genocido,” a Spanish word for someone who commits genocide, was written underneath the destroyed statue of de Aguirre.

The once-repressed Mapuche flag has become a symbol for all Chileans protesting against the government, with news outlets calling it an emblem of rebellion. Mapuche organization leader Aucán Huilcamán stated the rest of Chile now understands the Mapuche struggle due to the criminalization of the current protests. Thus, the protests mark a moment of convergence between non-Indigenous Chileans and the Indigenous People in the nation, with both experiencing economic turmoil and repression, and pushing for reform. This is highlighted by protest signs loosely quoting Eduardo Galeano,  “todos tenemos sangre mapuche, los pobres en las venas y los rico$ en las manos”—we all have Mapuche blood, the poor in their veins and the rich on their hands.

These protests have continued since the day they began, with thousands still pouring out onto Chile’s streets to demand change. Although Piñera has made concessions in attempts to win his people back over, such as raising taxes on the upper class and raising pensions, protestors have been left unsatisfied. His approval rating is easily under 20 percent, and the nation’s currency has fallen to a record low. Now, the fare hike is distant memory: Chileans, including its Indigenous Peoples, want constitutional reform, in addition to other demands such as the nationalization of resources and an end to centuries-long government repression of the Indigenous communities. To quote Stephanie Diaz, a 28-year old sports teacher from Santiago, “This protest is not about 30 pesos, but 30 years...It’s been 30 years since the return to democracy, but we have preserved a constitution made under the dictatorship.”

Under pressure, Piñera listened to the protestors, and on November 15, lawmakers agreed to hold a referendum on replacing the constitution in April.

On November 5, 2019, Cultural Survival submitted an alternative report to the Committee on the Elimination of Racial Discrimination (CERD) highlighting the issues that have been brought to attention during the protests. “Chile has failed to adequately align its constitution and national legislation with international standards of Indigenous rights,” it states, and “efforts towards consultation with Indigenous Peoples have been multiple but lack coordination and direction, and depth of engagement with Indigenous Peoples according to their own forms of decision making and on issues of importance to them.” It goes on to discuss further issues, such as how Indigenous efforts to protects their rights “are discredited by the State’s ongoing discriminatory application of the anti-terrorism laws criminalizing peaceful protest and is indicative of deep-rooted discrimination against Indigenous groups in Chile.” This history of discrimination is present not only in the judicial system—including “systematic corruption in national polices forces”—in Chile, but also in Chile’s mainstream media. One of the main recommendations of the report is focused on a new constitution. It recommends that Chile should “Continue a process of engagement with Indigenous Peoples regarding the construction of a new constitution...State actors should travel to Indigenous territories to engage with Indigenous leadership directly and on their terms...Consultation with Indigenous Peoples should establish the UN Declaration on the Rights of Indigenous Peoples as the minimum standard for defining Indigenous rights and should move forward with the declaration as a starting point…[and[ Indigenous Peoples must be consulted regarding the functional operationalization of Indigenous political rights into new Chilean law, rather than simply cultural rights.”

It remains to be seen what the new constitution will include, and how it will be drafted, but if the people of Chile—both Indigenous and non-Indigenous alike—are not directly included in its drafting, the political situation of oppression and protest is likely to continue for the foreseen future.