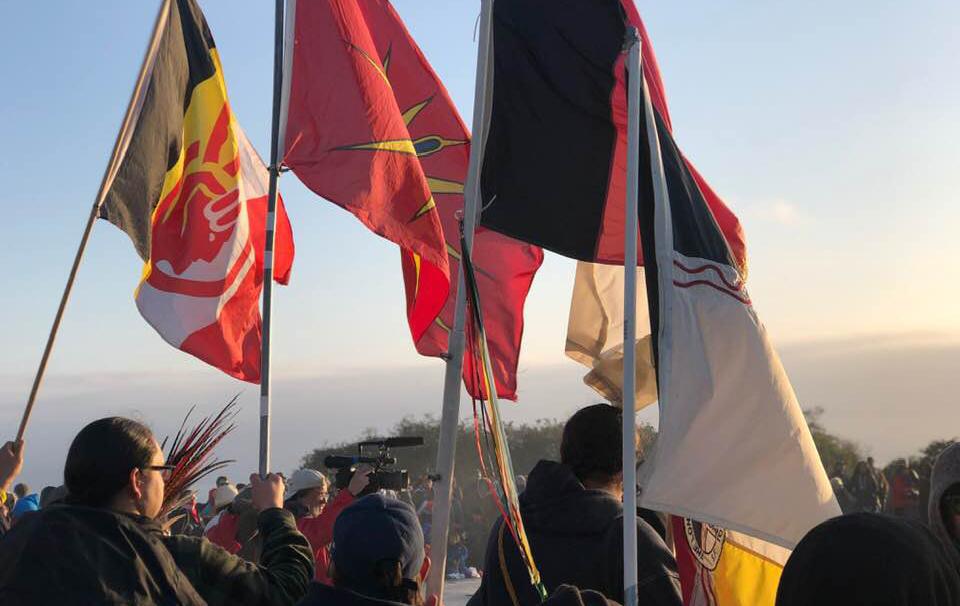 We have reached an unprecedented moment in history and for the first time ever, humans have induced what some are calling the sixth mass extinction, an event which will ripple out across biodiversity, ecosystems, and aquatic regions for generations to come. Projections include rates of species extinction, one hundred times higher, due to human activity and accelerated by centuries of colonialism. Indigenous Peoples’ Day amplifies the profound and powerful call to a higher consciousness by Indigenous Peoples and youth who continue to be the first line of defense for Unci Maka (Grandmother Earth).

For the most part, mainstream society touts western scientific approaches, technology, and experts in ivory towers. However, as the future draws nearer, more and more global actors, communities, and organizations are now looking to Indigenous Peoples for guidance.

There are 375 million Indigenous Peoples who account for 5,000 of the world’s 7,000 languages, and above 80 percent of its cultural diversity. Indigenous Peoples are distinguished as communities and Nations with ancient histories, cultures, languages, and knowledge systems which are tied to their ancestral territories
Today, studies show Indigenous cultural diversity increases biodiversity. In the same vein, Indigenous cultural survival depends on ecological survival, vice versa. When Indigenous rights are respected and protected, rates of ecological survival, carbon storage, water sustainability, reforestation, and the benefits of Indigenous stewardship increase.

While the western thinker has coined environmental approaches like: green footprint, green infrastructure, green technology, green approaches, and the green new deal, they still have the tendency to ignore the oldest Nations of the world, Indigenous Peoples.

As the water wars loom and Wall Street sets its sights on the water market, increased water privatization will be exacerbated by projections of water scarcity issues which will impact as much as 5 billion people by 2050-half the world’s projected population of 10 billion (United Nations).

My misun (brother), Thorne, once said regarding the Indigenous future, “you don’t have to look far for implementation, all you have to do is look in the mirror.” The same holds true for the global community, we do not have to look far to know where to start with global transformation.

Indigenous Peoples are leading the implementation of a global future which honors Unci Maka, water, and all life. They stand at the forefront of environmental protection. They represent the first and original line of defense for Unci Maka. Indigenous knowledge, technology, and science are being rescaled at unprecedented levels in responding to the global crisis, climate change, and global warming. By sheer Indigenous ingenuity and innovation, the Indigenous call to higher consciousness is being heard. Now is the time.

Wopila Tanka (Immeasurable Thanks) to the Indigenous Peoples and youth who have and continue to defend Unci Maka. Who in the world’s history, have been imprisoned, abused, and killed for defending Grandmother Earth. Remembering and honoring Indigenous Peoples, youth, and Movements on this Indigenous Peoples’ Day and each day after with our songs, dances, stories, and renewed commitment.

--Wakinyan LaPointe (Sicangu Lakota Oyate) lives in Minnesota, United States. He is an advocate for Indigenous rights, and is passionate about his Lakota language and culture. Working alongside his tiwahe (family) and the global Indigenous movement, Wakinyan attends the UN Permanent Forum on Indigenous Issues each year. He is a convener of the Mni Ki Wakan: World Indigenous Peoples Decade of Water Summit. Wakinyan started an organization centered on Indigenous innovation with his brother.